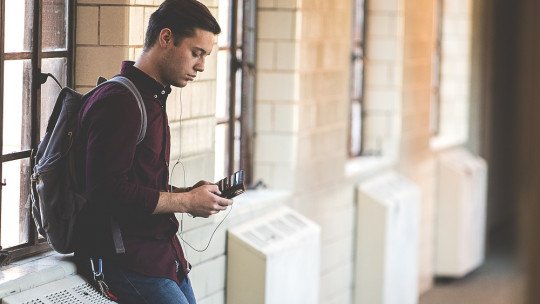 In the era of technology and communications, there is a phenomenon that is worrying mental health professionals: more and more people are addicted to mobile phones , completely “hooked” on their smartphone.

We can see them absorbed in their day to day life, messaging themselves through WhatsApp, without being able to take their view off the screen. This leads them to constantly check if they have any new notifications, preventing them from enjoying their day-to-day activities, as they always have a part of their mind on the positive reinforcement provided by social networks or instant messaging apps. This is known as FOMO syndrome, as described by psychologist Jonathan Garcia-Allen.

What is mobile phone addiction?

Mobile phone addiction is increasingly common and is a sign that we are becoming more dependent on technology. Some people do not make a rational and positive use of them, but end up maintaining a relationship of dependence with gadgets. This addiction is sometimes referred to as nomophobia.

This addiction can lead to serious problems and discomfort.

Some of the symptoms and signs that may indicate that you are addicted to your mobile phone (or cell phone , as it is known in Latin America), are the following:

There are a number of negative consequences arising from mobile phone addiction. These negative effects can be classified according to several characteristics.

As it is a dependency, it can be linked to states of anxiety and compulsion. When the person forgets his or her mobile phone at home, for example, he or she feels that something is missing, he or she feels cut off and this can cause anxiety and discomfort. In particular, this discomfort has recently been conceptualized as technostress.

The tendency to check the mobile phone every few minutes can be considered a compulsion. It is a behavior, an acquired habit that is not adaptive or brings us anything positive, but that the addicted person cannot avoid.

There are also negative effects of mobile phone addiction linked to the deterioration of interpersonal relationships . Many experts point out the paradox that, in the historical era in which we are more connected to other people and cultures, we suffer more from the effects of loneliness, isolation and incomprehension.

We have all noticed that meetings between friends have changed in the last decade. It is almost unthinkable that friendly chats are not constantly interrupted by one of the friends, who can’t stop checking his cell phone, answering messages, calls…

It is even possible to observe how in groups of friends, each and every one of them is more attentive to their mobile phone than to the people in front of them. This kind of collective autism makes us not enjoy the interactions in person, since we are in multitasking mode and paying attention to the smartphone, which ends up distorting the sense of the meeting, generating frequent pauses, and therefore not letting us flow and maintain a fresh and dynamic conversation.

In another old article by occupational psychologist Jonathan García-Allen published in Psicología y Mente we talk about work attendance. This phenomenon occurs when a worker goes to work but, for some reason, spends a large part of his or her day working on issues unrelated to his or her job duties.

Somehow, mobile phone addiction is causing a similar phenomenon in interpersonal relationships. Our friendly or romantic encounters are marred by constant interruptions. This alters the magic and uniqueness of each interaction.

The image we show with this attitude is very negative . We have normalized it, but let’s stop and think for a second: how would we feel if someone we have been meeting was constantly losing attention on us to look at another individual sitting several meters away, or at a television screen? We would probably hold on for a few minutes, until we got angry and left the place.

Of course, there are people who do not have the bad habit of checking their mobile phone while eating or going out for a drink with a friend. This is to be welcomed. And, of course, they deserve our respect and that we stop acting by dividing our attention between the real conversation and virtual conversations. It’s a matter of respect, education and valuing the other person and giving them our full attention. Their time is as valuable as ours .