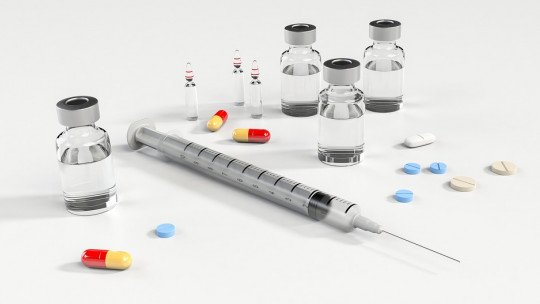 Whether it is because it has been administered to us on occasion, because of general culture or because we have read or seen it on occasion, most of the population knows what morphine is. This substance derived from opiates produces a deep anaesthetic and usually generates pleasant sensations. However, most people have a vague and general idea of its effects.

This article will present the effects of morphine, both in the short and long term .

Morphine as a psychoactive substance

Thus, morphine has effects that are mainly associated with a decrease in brain activity and that have a powerful relaxing, analgesic and narcotic effect. In fact its own name evokes these effects, as it comes from the Greek figure of Morpheus.

Besides this narcotic effect, it also causes pleasant sensations, such as the sensation of floating and a certain euphoria .

The use of morphine is very widespread at a medical level as an anaesthetic and analgesic when it comes to fighting the pains typical of some surgeries or diseases such as cancer.

It has also been used at times to treat heroin addiction and withdrawal, a drug derived from morphine.However, there is a risk of acquiring dependency and addiction to this substance , so its use should be highly regulated.

On the other hand, in some cases it has come to be used recreationally. Consumption is usually through an intravenous route , although there are presentations in the form of ingestible tablets.

It must be taken into account that its consumption can generate powerful side effects that can even put the lives of the subjects at risk if the dose is not properly controlled.

Morphine, like most opium derivatives, presents its action in the organism due to its interaction with the endogenous opioid receptors present in our body, of which it is an agonist.

The short-term effects of morphine are many and varied, and are usually the reason why they are applied both medically and in other situations. However, side effects or harm can also occur if the dose is excessive. Some of these are as follows.

Morphine is one of the most powerful analgesics known , causing the absence of pain perception in most cases. The pain produced by cancers, trauma, heart attacks or surgery can be treated medically with morphine or a derivative of it.

Another major effect of morphine is sedation, which can range from mild relaxation to excessive and prolonged sleepiness . In fact, such is its potency in this respect that excessive administration could cause the patient to fall into a coma.

Opium derivatives such as morphine initially generate a high level of euphoria and later lead to feelings of relaxation and drowsiness.

It is not unusual for people who consume morphine to have gastrointestinal discomfort, as well as constipation, dry mouth, nausea and vomiting .

5. Effects on muscles: feeling of heaviness, warmth or stiffness

It is common for one of the effects of morphine to be a feeling of heaviness in the muscles of the extremities. However when doses are high , morphine can cause high stiffness in the abdominal and thoracic muscles, as well as other muscle groups.

6. Effects on the respiratory system

As we have said, morphine causes a depression of the nervous system which generates the analgesia and sedation described above. One of the nuclei that reduces its activity is that linked to breathing, which becomes slower and more superficial .

It can also cause a depression of the cardiorespiratory function that can lead to the death of the consumer if the dose used is not controlled.

Another effect of morphine is at the level of blood pressure, which it reduces by reducing the performance of the autonomic nervous system. Also can produce bradycardia or arrhythmias .

As with heroin, morphine often causes disorders such as myosis or pupil contraction.

Sometimes the consumption of morphine produces the perception of elements that do not find correlation in the real world.

However, outside hospital settings where the dose is being monitored this effect usually indicates the presence of severe intoxication .

On occasion, and especially in the case of an overdose, reactions in the form of agitation, trembling and even uncontrolled convulsions may occur.

Morphine is usually used in specific, controlled settings where a large number of doses are not used, or as a palliative in terminal patients. In these cases, serious long-term effects are not usually considered.

However, sometimes the consumption of morphine has to be prolonged for some time, or the user uses it frequently regardless of professional indications. In these cases, in addition to the possible short-term effects, there are also the effects of accumulated consumption over time , the main risk being the acquisition of tolerance and dependency to the substance. In this aspect we can consider the following effects.

One of the possible long-term effects of morphine if more or less frequent use occurs, as is the case with other opiates, is the acquisition of dependence on it. Morphine is a substance with a high addictive potential , just like heroin, which can cause serious mental and behavioural consequences.

One of the long-term effects of morphine in cases of prolonged and continuous use and dependence is to cause disorders such as decreased judgment, dysphoria and decreased impulse control .

One of the effects of morphine is the presence of intestinal discomfort and difficulty in excretion. In the long term, severe constipation may occur for the regular consumer.

Dependence on and abstinence from this substance or other types of opiate can generate impulsive and antisocial behaviour, which can range from disconnection and loss of relationships to committing theft or even blood crimes in order to obtain resources to get a dose.

Risky behaviors such as sharing needles among dependent people can also occur, which can lead to the spread of diseases such as HIV and hepatitis.

The cessation of consumption in dependent consumers, if carried out abruptly, can generate serious health effects. On a physiological level it usually produces dysphoria or emotional distress, anxiety, craving or desire to consume, vomiting and diarrhoea, pain, mydriasis or pupil dilation, insomnia, fever and even convulsions.

Alterations in pregnant and lactating women

Morphine can be transmitted through blood or breast milk, so it should not be used in pregnant or nursing women. It can lead to dependency in the offspring, which in addition to the possible short-term effects can have serious implications for the development of the baby .