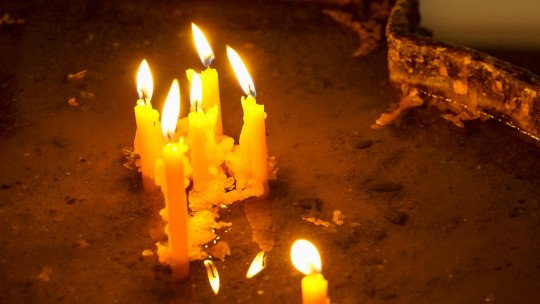 Each and every one of us is unique and unrepeatable, and we have very different experiences and perceptions of the world and reality. Most are interpretations that allow us to give meaning to what we live in a way that allows us to survive and adapt to the environment around us.

But sometimes alterations in the content of thought appear that make us interpret reality in a concrete way that is unadaptive and even harmful to oneself or the environment, preventing our correct adaptation and biasing our vision in such a way that we make false judgements about the world. This is what happens with delusions.

Within the deliriums we can find different typologies, differentiated by the aspect or theme to which they refer. One of them links states of sensorial alterations that are properly psychotic to beliefs of a spiritual type, making us consider, for example, a being with a divine mission or even a messiah. We are talking about mystical or messianic delirium .

What is mystical delirium?

We understand by mystical delirium to an alteration of the content of thought, product of an anomalous interpretation of reality, of religious-spiritual theme.

As a delusion, it implies an immutable and fixed judgment or idea that persists with great intensity despite the existence of evidence to the contrary, that usually generates a high level of concern or anxiety in the person who suffers it (or prevents the person from functioning normally) and that is at least very unlikely, there being also a complete lack of social or cultural support for such an idea . It is often the result of the interpretation of an altered perception (such as a hallucination), and usually involves a certain break with reality.

In this case, the delirium in question has a content linked to spirituality and religiosity . One interprets the world, oneself and others solely on the basis of faith, seeing in everything that happens a confirmation of one’s beliefs and a consideration of one’s role in the world.

They tend to have a consideration that most acts performed are sin and seek to atone for their faults or those of others, in some cases even violently. It is also not uncommon for there to be ideas of self-reference or even greatness, with the subject being considered a superior entity, a divine envoy or even a deity.

For a person without religious beliefs, it may be relatively simple to attribute this type of delusion to those who do have them, given that religious beliefs per se tend to be little modifiable and self-explanatory (although most people consider these beliefs to be modifiable and interpretable, others present them with fixity). But this is not the case, in the same way that having a good level of self-esteem does not imply a delusion of grandeur: we are simply facing a psychotic exacerbation of beliefs that were already in place.

In mystical delirium, the existence of revelation and mission is required, lived in ecstasy by those who suffer from it, in addition to the sensation of having a clear knowledge of the truth through that revelation. Also frequent is the abandonment of the style of life led until then and the total abnegation towards what they consider their mission . All of this separates mystical delirium from normative religious-spiritual belief, in which confusion does not appear followed by the idea of the significance of the hallucinatory experience.

Causes of this delusion

Mystical delirium, as can be seen, has a strong religious and cultural influence as one of its main bases. However, the causes of the appearance of this delirium do not depend only on this factor but there are multiple factors that contribute to its genesis. The delirium is perceived as a rational explanation by the subject , often serving to justify the existence of a hallucinatory experience that disturbs them.

Religiosity itself is a relevant factor but not necessarily a determining one (there is controversy according to the study as to whether its role is fundamental or just another variable), although the specific religious beliefs of a person with this type of delirium usually determine the type of content of the delirium. For example, in the Christian religion delusions related to guilt tend to be more abundant while in Judaism there is usually a greater experience of nocturnal hallucination associated with the bonding of the night with spirits .

However, many people with this type of problem do not have any specific religious beliefs, so it will not have an effect on everyone. Other relevant factors are the person’s level and type of education and their marital status.

Likewise, the existence of this type of mystical delirium has mainly been associated with the presence of intoxication by drugs, food or medicines, some medical or psychiatric illnesses (including especially psychotic disorders such as schizophrenia), acute or chronic pain (which can be interpreted as a sign), or dementias. It is usually typical of people who suffer from what Emil Kraepelin called paraphrenia, a chronic psychotic disorder in which the delusions have a relatively fantasy character and in which, except for the subject matter in question, the person does not present any great alterations.

Treatment of this type of delirium

The treatment of a delirium, regardless of its type, is complex and relatively slow. We all tend to hold on to our beliefs more or less firmly. This means that delusional experiences, which for those who have them represent reality better than others, are attempted to be perpetuated and attempts at direct modification are directly rejected. Likewise the interpretative biases of the phenomena that occur make the subject reinforce his delirious ideation.

In all cases it is first necessary to stabilize the patient if we are facing a psychotic disorder or fight the infectious or toxic agent if we are facing an infection or intoxication of some kind. Once the psychological process has begun, it is first necessary to overcome the patient’s attitude of vigilance and aversion towards the therapist and to gain his or her trust, without making a direct confrontation with his or her delusional beliefs. The aim is to foster the therapeutic relationship and to gradually gain access to the core of the ideation as confidence increases.

The idea is that the patient should gradually go into the world and visualize what has led him to think in such a way. To generate an increase in communication and gradually adjust the thinking processes towards a more adaptive scheme of reality.

The type of environment that the patient has can also play a relevant role in his treatment, because it is possible that in its beginnings the symptomatology is not considered aversive until after a long time. This increases the risk of chronicity and consolidation of the delirium. In this sense, some psychoeducation of the environment in relation to the problem that the subject presents (always respecting the religious beliefs that they have), could be beneficial for both the subject and the patient.