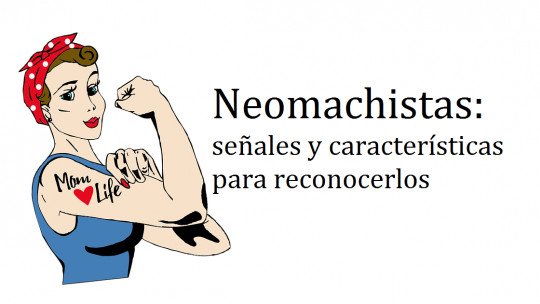 Thanks to initiatives in favour of feminism, women in many countries can now enjoy conditions of equality that would have been inconceivable decades ago.

However, machismo is still deeply rooted in all kinds of cultures and societies, which means that many prejudices and ideas still weigh down on women. In Western countries, open and traditionally publicly claimed machismo has largely disappeared, but there is still a remnant: neomachismo and, particularly, people with neomachist attitudes .

A neo-Machist is, in short, a person who believes in the inferiority of women , or that women deserve less the appellation of “human beings” than men, but who tries to make this system of ideas hidden. In other words, neo-Machists reproduce, to a greater or lesser extent, the ideas linked to machismo, but reformulating certain assumptions and arguments so that these are more subtle.

Neo-Machism, like machismo, is not based on hatred of women, as it is where misogyny is present. It is based, simply and plainly, on the disdain and defence of the idea that being a woman always implies having less value as a person with interests, motivations and own criteria . Neo-Machist people will express these ideas in an indirect way, avoiding certain acts and phrases that are considered politically incorrect by the majority of the population.

Suggested reading: “Psychology of sexism: 5 sexist ideas that are currently being put forward”

That’s why recognizing a neo-Machist is not as simple as doing the same with someone who is clearly sexist. However, that does not mean that it is not impossible to do so.

Below I propose some basic characteristics that the neo-Machist may present, not to criminalize people prone to fall into these attitudes, but to take into account that these ideas are still alive although it may not seem so at first glance.

One of the great paradoxes of neomachism is that can be expressed through an apparently advantageous treatment of women . But it is not about a friendly treatment based on individual affection towards a person who turns out to be a woman, but it is based on the idea that women have the social status of children who, due to their lack of maturity, must be protected and oriented in their lives.

In this sense, an attitude very present in neo-Machism is to treat almost all women, systematically, as if they were little more responsible for their lives and personal decisions than a child.

2. The elegant defence of traditional values

Neo-Machists do not explicitly defend the legitimacy of men’s power over women or the domination by force of the former over the latter, but they can show nostalgia for the traditional values on which this type of behavior was based decades ago . For example, they may show a romantic vision of the lover who protects her lover from dangers and at the same time controls her so that she does not become the possession of another man. They may also claim in a more or less veiled way the ideal of the pure woman who lives only for her partner, which implies that women who do not conform to this stereotype are impure.

It is a defence of traditional values that is intended to be associated with elegance and good manners, with what is morally correct and “natural”. Thus, the neo-Machist denies the possibility of questioning these ideas and beliefs by relying on a dogmatism based on what has been done for centuries.

Neo-Machist people, regardless of their sex, tend to comment more on women’s physique than on men’s appearance .

They may be phrases that fit the topic of a conversation that was in progress or they may be isolated comments, and they may be addressed to the woman herself or to other people. The fact is that since neo-Machism the appearance of women takes on special importance, as it is related to the reproductive value of women.

An important part of the work on gender studies and feminist anthropology points out the link that exists in the West between women and the domestic environment. Traditionally, in European societies the role of women has been limited to the domestic sphere while men, in addition to being in charge of the home, have unlimited access to the public sphere of society. Thus, the idea has been proposed that if the male role is that of producer of goods and services that will allow the family to be provided, women have traditionally been in charge of reproduction.

Thus, while a man’s role cannot be reduced to just one of his attributes, a woman’s role could be reduced to the parts of her body that have a direct role in reproduction and nurturing . Although in Western countries the woman’s sphere is no longer only the domestic one (the number of university students and qualified professionals has grown a lot), remains of this value system remain in the form of neo-machism where it is taken for granted, for example, that the destiny of every woman is to be a mother, or where it is assumed that a woman’s professional or financial success is linked to her ability to attract men.

Whether differences between men and women are caused by culture and education or by genetic inheritance is a subject of intense debate in scientific circles and there is no clear answer. However, neo-Machists will be biased towards the position that all gender roles associated with the feminine are produced by biological differences that cannot be avoided and that largely determine the behaviour of both sexes, even if today this radical and deterministic position has little or no foundation.

Of course, the supposedly “natural” feminine behaviour that is defended from neo-Machism is more related to submission and domestic tasks and simple than those of men, who are traditionally in charge of making the most important decisions and of ruling over the rest of the members of the family.

Seeing women in high positions or in positions associated with great decision-making power does not fit well with the traditional feminine ideal. Therefore, people who are prone to fall into neomachism will show great sensitivity to the errors or the characteristics perceived as negative that these women may show , however insignificant they may be.

The very fact of being a woman with a high responsibility can be a reason for criticism if it is understood that she only does her job “to be able to command”. This bias will not exist when valuing the work of male leaders.

In the conservative view of a neo-Machist person, women always appreciate compliments if they are sufficiently elegant and inspired.

Of course, this is not the case, because if it were true, the level of complexity of the women’s psyche would be drastically reduced. However, in neomachism there is more emphasis on the way in which women’s mentality can fit with the stereotypes of the feminine than the capacity of these people to think and act free from these ties.

Note aside: the criticism of feminism

There are political motivations that lead to attempts to link criticism of feminism (or even the use of words such as “feminazi”) with machismo.

However, this could only have a basis if as feminism we understand, simply, the claim of the idea that men and women have the same value as human beings. The problem, and what makes that someone who criticizes feminism does not have to present the typical characteristics of someone who sustains ideas and macho beliefs, is that feminism does not have to stick to this so lax definition , especially since it is understood that there is not only one feminism but several.

The new feminisms are a set of social movements and theories that fight for the recognition of women as human beings and/or for making them have the same rights and possibilities as men. There is no common goal or way of understanding gender inequality in these movements, and many feminisms have totally opposite points of view. The only thing that all the new feminisms have in common is that

1. They point out the insufficiency of basing equality between the sexes on the use of laws that do not discriminate against women.

2. They challenge the traditional Western belief and value system regarding love relationships, marriage or gender roles. Part of the battle that the new feminisms are fighting is cultural.

People who reproduce neo-Machist ways of thinking have reason to try to discredit all feminisms on the basis of the second of the characteristics shared by all new feminisms, which is the one that goes against the essentially macho idea that women are predestined to play a subordinate role.

In these criticisms there will be no room for the nuances that exist in feminism, and everything that can be related to feminism as a unit will be pointed out negatively , because as a group of political and social movements it can threaten the traditional system of values.

However, this point, as a defining characteristic of people who reproduce a neo-Machist way of thinking and acting, has an important limitation: it is not easy to know whether the criticism of feminisms as a whole is based on the second characteristic shared by these currents of thought, or whether they attack only the first one.

Non-conservative and non-mainstream people could make very elaborate and solid criticisms based simply on the assumption of the new feminisms’ overreaching.

This small list of characteristics is not one that will identify people prone to neo-Machism in a matter of seconds.

Machismo does not consist of the repetition of stereotypical phrases and actions, but rather is expressed depending on the specific context in which the person finds himself . That is why to see if these indicators fit with someone’s behaviour it is necessary to take into account several factors and to assess the existence of alternative explanations.