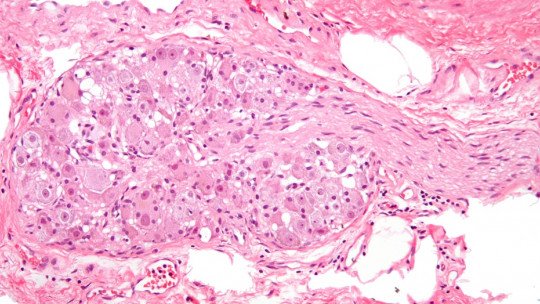 A nerve ganglion is the grouping of neural bodies located outside the central nervous system that performs very important functions in transporting electrical impulses by connecting the brain to specific organs.

In this article we’ll look at what a nerve node is , how it’s composed and what the two main types are.

What is a nerve ganglion?

In biology, the term “ganglion” is used to designate the masses of tissue that are formed in cellular systems. Specifically in neurology, the term usually refers to a mass or grouping of nerve cell bodies present in most living organisms. Its main function is to carry nerve impulses from the periphery to the center, or vice versa.

The sensory nerve ganglion acts by receiving signals from the periphery and sending them to the brain, i.e. it has an afferent function. It is also known as the somatic ganglion, sensory ganglion, or spinal ganglion, since it is located at the back of other structures called spinal nerves. The latter are the nerves that form the dorsal and ventral roots of the spinal cord . For the same reason, the sensory nerve ganglion is also known as the spinal ganglion.

It is prolonged by these roots or branches through different parts of the body, and is responsible for activating electrical impulses from the skin and muscles of the back (dorsal branches). In fact, another common name for these nodes is “dorsal root nodes.

The autonomic nerve ganglion acts in the opposite direction to the sensory nerve ganglion, i.e. efferently: it receives signals from the central nervous system and sends them to the periphery. It is also called the vegetative ganglion, and since it belongs to the autonomic nervous system, it regulates motor activity. They are located near the viscera on which it acts , although keeping a distance from them, and are divided into two types of nodes:

These are the ganglia that are part of the parasympathetic nervous system. They are located in the wall of the viscera that innervate, that is, in the specific area of the organism where the nerve acts. Because of their proximity to the organs on which they act, they are also known as intramural nodes (except for those acting on the neck and head). They are made up of three different roots according to the path followed by the nerve fibres: motor root, sympathetic root or sensory root.

In turn, these nerve fibers make up various cranial nerves, including the oculomotor, facial, glossopharyngeal, vagus and pelvic splenic nerves.

As their name suggests, they are part of the sympathetic nervous system. They are found on both sides of the spinal cord, forming long nerve chains. These are the nodes that are found around the celiac axis (the arterial axis that originates in the aorta, specifically in the abdominal part of this artery). The latter are the prevertebral sympathetic ganglia, and can innervate the organs which make up the abdominal and pelvic region, or

Among its main functions is the transmission of information about events that may be hazardous to the body. In this sense, they are related to stress situations and are one of the elements responsible for responding to them, either by escape or aggression.