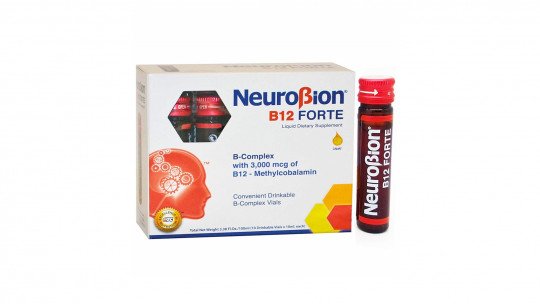 Like all animals, humans need to eat to survive . Our body is a complex machine that requires multiple types of nutrients, such as proteins, lipids, fiber and minerals, carbohydrates … and vitamins.

Everyone knows the importance of the latter, since they are involved in a large number of fundamental processes: we need them for our body to function properly.

Most people get all the vitamins and nutrients they need through different actions, including eating and sun exposure. However, sometimes there are circumstances and problems in which some pharmacological help may be necessary to combat the deficit, using for example different types of vitamin supplements.

One of them is Neurobion , which we will talk about throughout this article.

Neurobion or Nervobion is a drug or medicine in the form of a multivitamin complex that is known to help fight inflammation and pain caused by a lack of certain types of vitamins. Specifically, it is made up of a combination of three vitamins: B1, B6 and B12 (also called thiamine, pyrodoxin and cyanocobalamin).

These vitamins are important for the metabolism and the transformation of food into energy, the production of blood cells and the proper functioning of the immune system. The absence or deficit of these vitamins can have serious repercussions and often causes symptoms such as fatigue, tingling, pain, anemia, inflammation and even paralysis and loss of sensation.

This drug can be found mainly in two types of presentations: in tablet form for oral consumption (usually to be taken with food) or in injectable form for intramuscular administration. In the latter, there are pre-filled double-chambered syringes or ampoules in which the contents are to be injected.

Many conditions can be alleviated or benefit from the administration of Neurobion.

As a multivitamin complex, one of the most frequent indications is for states of deprivation, deficit or lack of vitamins that compose it, which in turn can be associated with different conditions.

Among these conditions we can find, if there is a deficit of vitamins B1, B6 and B12, the following: anemia (if it is of a type in which there is a deficit of these vitamins, otherwise it would be contraindicated), restrictive diets (for example in anorexia), suffering from infections and weakening of the immune system, chronic alcoholism or elderly people (although in this case with caution). People with diabetes may also be indicated if they have a deficit of this group of vitamins.

In addition, another of its main indications is in the treatment of different types of neuropathies or alterations of the nervous system, either by inflammation or compression. In this sense, its role in the treatment of neuralgias and neuritis, which usually cause pain, paresthesias and tingling due to the affectation of different nerve fibers, stands out.

This includes for example the different diabetic neuropathies, sciatica or intercostal neuralgia. It is also indicated in cases of muscular pain and cramps, gout or low back pain.

Despite being a multivitamin complex, Neurobion is still a drug, the use of which may entail some risks and lead to the appearance of adverse reactions . This is especially relevant when it is used in excess or if it is consumed without there being a deficit in these vitamins, given that if there is an excess the vitamins may have harmful effects.

In this sense, and although rare, some of the side effects may be allergic reactions, abdominal pain, nausea and vomiting, dizziness, eczema (in some cases necrosis at the injection site) or alterations in urination (red urine, this is a condition called chromaturia).

In subjects who are prone to gout, it can contribute to the appearance of neurological symptoms. In exceptional cases (although they exist) they can cause colitis, haemorrhages, insomnia, liver and/or kidney problems or convulsions, as well as reactions of anaemia and low platelets and leukocytes.

Neurobion, while useful in helping to prevent or combat some conditions and discomforts, can have harmful effects like the above and is contraindicated for some sectors of the population.

Specifically, it is contraindicated in pregnant women (in excess it can affect the neuronal development and even produce dependence) and infants, as well as in those with renal or hepatic insufficiencies. It should also not be taken by people who are allergic or hypersensitive to these vitamins, or by people who suffer from amblyopia (lazy eye), tobacco, Leber’s disease or are being treated with levodopa (a drug frequently used, for example, to treat Parkinson’s symptoms).

These include altretamine, levodopa, contraceptives, immunosuppressants, anti-tuberculosis and antihypertensive drugs. For this reason, the suitability of their consumption should be consulted with the doctor.