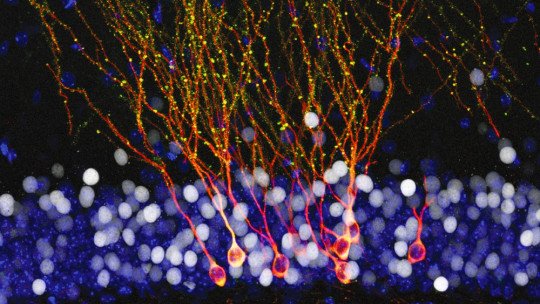 Our brain is made up of a large number of neurons that fit together like a huge puzzle. Thanks to the fact that all of them are in their correct position, our nervous system can function at full capacity and without any kind of problem.

However, neurons are not born in their final position anymore. They are formed in another region of the nervous system and must travel a long way to reach their destination. This phase of brain formation is known as neuronal migration . Any abnormality in its development can cause serious malformations in our nervous system and as a consequence a great number of neurological disorders.

What is neural migration?

Our brain is made up of hundreds of thousands of neurons. A large number of these nerve cells originate in different locations than they will occupy in adulthood .

This process is known as neuronal migration, and most of it occurs during embryonic development , specifically between 12 and 20 weeks of gestation. During this period, neurons are generated and travel through our brain until they settle in their final position.

This movement is made possible by signals from other neurons, which are already in their final position and play a role similar to that of a traffic light directing traffic, sending out different types of signals to which the migrating neurons respond.

This migration procedure takes place from the ventricular area of the neural tube, where the neurons originate, to the place designated for them. During the beginning of neuronal migration, these cells are located between the ventricular zone and the marginal zone , which form the intermediate zone, a space of transitory location.

Neuronal migration takes place in different phases and is highly complicated. Since these nerve cells must travel a great distance and avoid numerous obstacles in order for the brain to develop completely and satisfactorily. To this end, are helped by a type of cell that forms what is known as the radial glia , which acts as a scaffold through which the migrating neurons move.

When some of these phases of neuronal migration are not carried out correctly, changes in the organization of the brain and even very important brain malformations can appear.

In this first phase, which occurs from day 32 of the gestational cycle, nerve cells or neurons originate.

A large number of these neurons are born in the germinal zones or germ matrices, hence the name of the phase. These zones are located in the walls of the lateral ventricles.

During this second phase, the neuronal migration itself takes place. That is, the neurons leave their place of origin to move towards their final position.

This process is made possible by the glial radial system. In this system, a cell not already present in the adult brain guides the neurons into position.

In this last phase, the differentiation and subsequent organization of the neurons takes place. Due to the complexity of this final stage, we will now explain what it consists of and what its particularities are.

How does differentiation occur?

When the neuron has managed to reach its final location is when the differentiation phase begins, achieving all the morphological and physiological qualities of a fully developed neuron. This differentiation depends both on how the neuron is genetically preconfigured, and on the interaction with other neurons and the creation of connection pathways.

In our nervous system, as well as in the rest of the vertebrates, the neural cells are differentiated from each other as a result of different progenitor cells, which are located in specific locations in the neural tube.

Once the process of differentiation is finished, the neurons organize themselves by joining one another , finishing the process of neuronal migration and finishing completely the development of our brain.

Defects in this biological process

As detailed in the first point, any anomaly in the course of neuronal migration can have consequences on the formation of our brain ; from malformations to alterations in brain organization.

The most serious malformations are associated with alterations in intellectual development and epilepsies, while in organizational problems the brain has a correct external appearance but the neural connections are very damaged due to the fact that their correct arrangement in the brain did not occur.

Among the causes of these failures are

As for the consequences of these shortcomings on migration An abnormal development of the process can lead to a large number of disorders and disturbances. Among these disorders we can find:

Lysencephaly is the most serious consequence of a failure in neuronal migration. In this case, the neurons start their migration but are not able to complete it, which causes serious deformities in the brain.

Depending on the severity of the malformation, lysencephaly can be divided into three different subtypes:

In this case, the problem is due to an alteration in the start of the migration. This affects a small group of neurons which accumulate in different locations from those which normally correspond to them.

In these cases, the person experiences strong seizures that emerge during adolescence . In addition, although they usually have normal intelligence, certain patients experience learning problems.

In polymicrogyny, the arrangement of the neural mass creates small abnormal convolutions that are separated by surface grooves, creating an irregular cortical surface.

In this condition, two types of polymicrogiria with different clinical pictures can be distinguished:

The schisencephalias are distinguished by a normal volume of grey matter but with alterations in the circumvolutions of smaller size and more superficial than usual and surrounded by very shallow grooves.

This pathology does not have specific clinical symptoms , but these can vary according to the extension and location of the affected areas. In some cases there may be no visible clinical signs, while in others people may suffer from epileptic episodes of varying intensity.