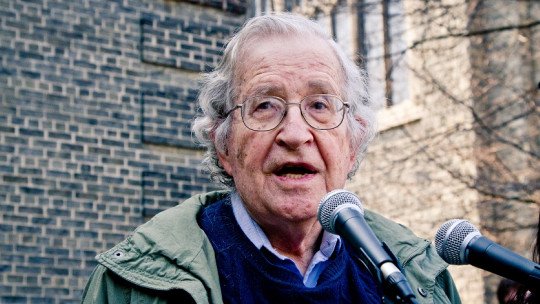 Today there are few thinkers and researchers with the reputation of Noam Chomsky . His interventions in the media are constantly circulating on the Internet, the interviews he offers have massive audience levels and he has even snuck in a few songs, like this one by Espaldamaceta.

It’s not strange. Chomsky is a controversial person, and strangely enough he is not controversial for selling his life in exclusive pieces or for having a groundbreaking aesthetic, as is common in today’s celebrities. Noam Chomsky is known for his ideas in two apparently unconnected fields: politics and linguistics (or psycholinguistics ).

We will now go over the details of your life journey to date.

Noam Chomsky was born in 1928 in the American city of Philadelphia, in the family formed by the marriage of William Chomsky and Elsie Simonofsky, both scholars of the Hebrew language and originally from Eastern Europe (the current Ukraine and Belarus, respectively). Both Noam Chomsky and his younger brother, David Eli Chomsky, were educated in an atmosphere of respect for the Jewish roots of their lineage , and they were also imbued with the activist spirit of their parents, very much influenced by the left-wing Zionism that was taking shape in Israel with the emergence of the Kibbutz communes.

During his childhood and into his teenage years, Noam Chomsky developed a vocational habit based on reading essays on politics. This, together with the fact that from a very young age he frequented environments related to the anti-system left, led him to place himself ideologically in anarchism . Like researchers like Viktor Frankl, he began writing his reflections at a very early age, before he was 13.

In 1945, Chomsky began a university career in the world of the humanities and, specifically, in philosophy and Semitic languages, all from the classrooms of the University of Philadelphia. The contact with linguist Zellig Harris during his university years made him decide to focus his studies on linguistics. In 1949, she would also marry Carol Doris Schatz (later known as Carol Chomsky), who would also become a well-known linguist.

But Noam Chomsky’s studies and interests went far beyond the study of languages themselves. His early research, carried out since Harvard between 1951 and 1955, came to have implications for other issues of concern to psychology, such as the processes by which language and mental structures may appear. This led him to confront the behavioural explanation of the emergence and learning of languages that B held. F. Skinner, among others.

In the field of psycholinguistics, Noam Chomsky is known for his theory of Universal Grammar and his ideas on language development based on genetic inheritance, something that was used by evolutionary psychologists such as Steven Pinker to explain the nature of language in human beings. You can read more about this in this article on Chomsky’s theories. In parallel to all these research activities, Noam Chomsky’s curiosity about issues related to the politics and development of capitalism did not cease. That is why this researcher combined his studies on linguistics with the reading of political essays , the writing of reflections and articles and the holding of conferences in which he has fiercely criticized the system of structural relations and the distribution of wealth that he relates to the essence of capitalism, while also criticizing certain aspects of the left that he calls authoritarian.

Noam Chomsky has also made the United States’ policy and its repressive role at the international level the target of his dialectic darts, favouring coups d’état and intervening militarily abroad for reasons that can hardly be linked to self-defence. It is not surprising that he was totally opposed to his country’s participation in the Vietnam War, for which he was even arrested . In recent years, due to his advanced age, Noam Chomsky has retired from teaching, but continues to appear before the media to support new leftist initiatives . Since the 1990s, especially, Noam Chomsky has been focusing on commenting on the political agenda and the development of inequalities, something that has earned him not a few enemies in a country as liberal as the United States.

The fact that he gives visibility to ideologies related to anarchism and that he has shown support for movements like Occupy Wall Street has made him a person who, despite not being excessively pampered by the mainstream media, arouses a lot of interest.

Noam Chomsky has also remarried, following the death of his first wife in 2008. His current partner’s name is Valeria Wasserman.