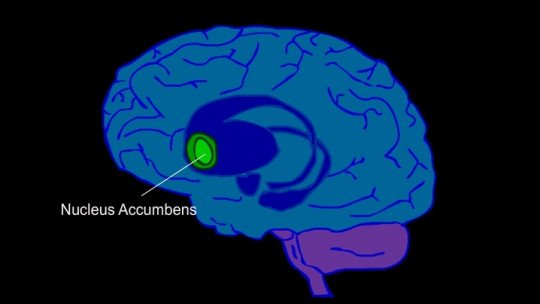 It is already known that the different regions of the brain, although their functioning requires their coordinated action with the rest of the brain, tend to specialize in certain functions.

This article intends to show the importance of the functioning of the nucleus accumbens , a part of the brain not too well known by most of the population, but of great relevance for the human being due to its participation in the brain reward system and the integration of motivation and action.

The nucleus accumbens is a subcortical brain structure, located at the point where the caudate nucleus and putamen meet the septum. This nucleus forms part of the ventral zone of the striated body , being one of the nuclei that form the basal ganglia.

The nucleus accumbens is also part of the brain’s reward circuit, having a great influence when integrating cognitive, motivational and motor aspects, and being one of the main nuclei that allows the will to be translated into action, allowing the realization of pleasure-seeking behaviors.

Parts of this structure

The nucleus accumbens has traditionally been divided into two sections, central zone and cortex, due to its different connections with other brain areas and its greater link to the emotional or motor.

This part of the nucleus accumbens is characterized by its high number of connections with the limbic system and the hippocampus, receiving both dopamine and serotonin and glutamate from various brain areas.

It is therefore the part of this structure that is most closely linked to emotions. It also has many connections coming from the front, sending the nucleus accumbens the collected information to the thalamus and receiving it back to the central zone of the nucleus accumbens.

The central area of the nucleus accumbens has functions mainly linked to motor skills, being connected to the basal ganglia, the substantia nigra and the motor cortex. E his area is activated to a great extent when performing actions with emotional meaning directed towards a specific goal.

Although many of them are shared by the rest of the basal ganglia, some of those processes in which the nucleus accumbens has special participation are the following .

One of the main functions of the nucleus accumbens is to transmit the information about the motivation of the subject and to translate it into a motor action in order to fulfill the objectives of the organism. This integration comes from its connections with both the prefrontal and the basal ganglia. Thus, it allows us to make instrumental behaviors, directed to a specific end.

In a sense, this function of the cerebral amygdala has to do with a very important type of memory: emotional memory. This capacity lies on the borderline between emotion-linked mental processes and higher psychological processes, since on the one hand it works with emotions and on the other it influences decision-making and concept creation.

The connections of the nucleus accumbens with the frontal lobe have allowed to see how this structure has participation in the ideation and planning of the behavior , being as we have said an important point of integration between the motivational aspects of the behavior and its implementation.

3. Evaluation of the situation

The participation of this structure is also given at an evaluative level, by integrating the emotional information with the adaptive assessment carried out by the front end. In this way, it is possible to associate a stimulus with a subjective evaluation by means of a process that also has to do with emotional memory.

The nucleus accumbens plays an important role in the addictive process , since it is linked to reward experimentation. This brain nucleus is part of the mesolimbic pathway, forming part of the brain’s reward centre. Specifically, it is in this area where stimulant drugs act, producing an increase in brain dopamine levels.

Although it is not the only brain structure linked to pleasure experimentation, the nucleus accumbens does maintain a close link with its achievement. Different experiments have shown that although its inhibition does not eliminate the desire to obtain a booster, it does produce a decrease or suppression of the behaviors necessary to obtain the object of desire. The data observed show that the participation of the nucleus accumbens occurs in addictive processes, as well as in food and sex .

The previous points cited show that the nucleus accumbens has great relevance when it comes to establishing the automation and learning of behaviours aimed at obtaining a reward. It also participates in the process of habituation.

A hyperactivity in the nucleus accumbens can cause aggressive behaviour . In the presence of a very high presence of dopamine and other alterations that make behavioural inhibition difficult, it can lead to seeking personal satisfaction without assessing the risks.

In fact, studies conducted on people with psychopathy seem to indicate that these people have, among other alterations, a severe imbalance in the nucleus accumbens, suffering from a hyperreactivity to dopamine that could induce them to seek their own reward with indifference to the consequences for others.