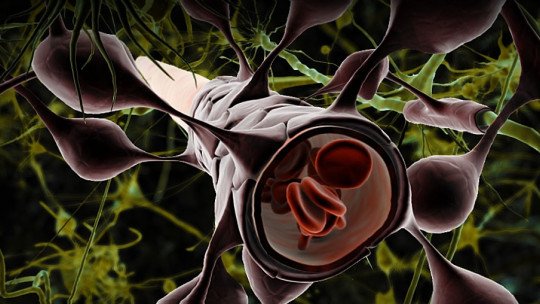 Neurons are essential for the transmission of electrochemical impulses through the nervous system. However, they cannot fulfil this role by themselves: they require the support of glial cells for very different tasks, such as the supply of nutrients, the maintenance of structure or the acceleration of neural conduction itself.

Particularly important in the latter function are oligodendrocytes, a type of glial cell that forms the myelin sheaths that envelop the axons of the central nervous system. In this article we will analyse what oligodendrocytes are and what functions they perform and describe their two main types.

Oligodendrocytes are a type of glial cell found exclusively in the central nervous system, i.e., in the brain and spinal cord. These cells create myelin sheaths around the axons of the neurons , isolating them and increasing the speed of transmission of the electrochemical impulses that pass through them.

In some axons the myelin sheaths are separated into sections; the nonmyelinated spaces are called “Ranvier’s nodules” . These points allow jump conduction of neural impulses: in the Ranvier nodules the ionic exchanges with the extracellular space regenerate the action potentials, further accelerating the transmission.

Myelinization begins before birth but continues during the first three decades of life. Unlike Schwann cells, which perform similar functions in the peripheral nervous system, oligodendrocytes can cover up to 50 different axons due to their multiple extensions.

This type of glia forms in the ventral ventricular region of the spinal cord during intrauterine development, later than other types of glia. In adults, oligodendrocytes continue to appear from glial progenitor cells, although their number is much lower than during the first neurogenesis.

Glial cells make up half the nervous system. They fulfil support functions in relation to the neurons : they give structure to the networks of neurons, nourish them, maintain the stability of the extracellular environment, regulate the growth of dendrites and axons, repair cellular lesions, direct the neuronal migration during embryonic development…

Among the most numerous glia cells we find the astrocytes, which give structure to the blood-brain barrier (allowing the supply of nutrients and the cleaning of waste in the nervous system), the microglia, which performs immune and regenerative functions, and l the Schwann cells, which are responsible for the formation of myelin in the peripheral nervous system.

The group of oligodendrocytes and astrocytes, which are also located in the central nervous system, is called “macroglia” because of the remarkable size of these two cell types compared to the rest of the glia, especially the microglia.

Two main types of oligodendrocytes have been found : inter-fascicular and satellite . These two glial cell subclasses differ mainly in their functions, although they are very similar at the structural and molecular level.

The basic type are the interphascular oligodendrocytes, which form part of the white matter of the brain and give it its characteristic colour. When we speak of “oligodendrocytes”, we are most often referring to these, since they are the cells that deal with the formation of the myelin sheath, the main role attributed to oligodendrocytes.

Functions of these cells

In this section we will focus on describing the main roles of interfacial oligodendrocytes which, as we have said, are better known than those of satellites. These functions are mainly associated with the formation of myelin sheaths .

Myelinated axons send out action potentials at a much higher rate than those that are not, especially if they contain Ranvier’s nodules. An adequate rhythm of neural conduction allows the correct functioning of the muscular and hormonal system, among other organismic functions, and has also been related to intelligence.

The myelin sheaths also isolate the neuronal axons from the extracellular medium; this function prevents the filtration of ions through the cell membrane .

3. Structuring of the nervous system

Glial cells in general play an important role in maintaining the structure of the neuron networks. These cells are not very strong by themselves, so they need the physical support of the glial cells, including oligodendrocytes.

4. Support for the development of neurons

Oligodendrocytes produce various neurotrophic factors , proteins that interact with neurons to keep them active, preventing apoptosis or programmed cell death. They also promote the cell differentiation required for the formation of neurons.