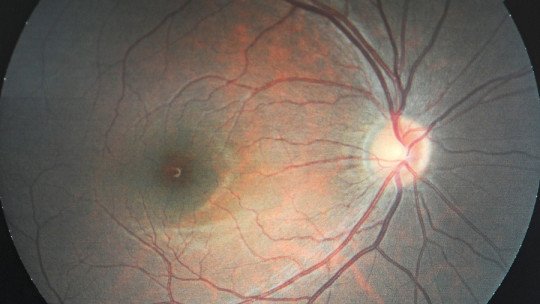 Sight is one of our most essential senses, being probably the most developed exteroceptive sense in the human being. Not in vain, we devote a large part of our brain to the processing of visual information, being able to perceive a variety of parameters such as color, shape, depth or brightness with remarkable sharpness and precision.

But in order to process all that information, and indeed to be able to see in general, it is first necessary for the information captured by the eyes to reach the relevant brain nuclei. And this would not be possible without the existence of the optic nerve , about which we are going to talk next.

We give the name of optic nerve to a tract or set of nerve fibers that go from the eye to the central nervous system and whose presence allows vision. This tract forms part of the cranial nerves, specifically the pair II, and consists of more than one million neurons (approximately estimated at around one and a half million) of a sensory type, not transmitting information to the eye but only receiving it from it.

This nerve can be located in a space between the back of the eyeball, having one of its ends in the ganglion cells of the retina, on the one hand, and the optic chiasm, on the other . This small section, between 4 or 5 cm long, is of vital importance and without it we would not be able to see.

From the chiasm, most of the optic nerve fibers of both eyes will decay (i.e. the left eye will pass to the right hemisphere and vice versa), forming a tract that will lead to the lateral geniculated nucleus and from there to different nuclei of the cerebral cortex.

The optic nerve has the particularity that initially the fibers that are going to form it (the neurons that connect with the ganglion cells) are not myelinated until they meet in the so-called optic papilla or blind spot, an area where there are neither cones nor rods and from which the neurons are going to form the optic nerve itself, already myelinated in order to allow a fast and efficient transmission of visual information.

Thus, the optic nerve, which consists mainly of myelinated axons , is mainly white substance. Although it originates outside the skull (in the retina), once it enters the skull and especially the bony part, the optic nerve is covered and protected by the meninges.

The main function of the optic nerve, as you can already guess, is to transmit the visual information we receive through the retinal photoreceptors to the rest of the brain in order to process and interpret it.

First the photoreceptor captures the external information , generating a series of electrochemical reactions that in turn will transform the data into bioelectric impulses that will activate the retinal ganglion cells, which in turn will travel to the blind spot where the nerve fibers join to form the optic nerve, which will proceed to send the message.

Curiously, despite being perhaps the nerve that is most important when it comes to seeing its location on the retina, it is the one that causes our blind spot to exist.

Parts of the optic nerve

Although the optic nerve has a relatively small size in its journey to the optic chiasm, the truth is that different segments can be observed in its journey between the eye and the said chiasm . Among them, the following stand out.

This first segment of the optic nerve is the one that still runs inside the eye, in the stretch that goes from the ganglion cells to the blind spot and then passes through the lamina or sieve zone , which crosses the sclera and the choroid.

It is in this third segment that the optic nerve finally reaches the skull, next to the ophthalmic artery. To do this, the nerve will enter through an orifice called the optic foramen . This area is one of the most sensitive and easiest to injure.

The last of the segments is the intracranial, in which the optic nerve is already completely inside the skull and travels to the optic chiasm. It is here that it receives the protection of the meninges.

Pathologies and problems associated with your injury

The optical nerve is one of the most important in our visual system and without it, vision as such would not be possible. There are multiple possible conditions that can occur in this nerve and cause us either blindness or alterations and difficulties in our vision.

Among them we can find atrophy of the optic nerve derived for example from a neuropathy (for example derived from metabolic problems such as diabetes), intoxication, meningitis (remember that the meninges cover this nerve in some portions, so in case of inflammation they could compress it and damage it), strokes or tumors that generate pressure or destroy this nerve.

Another possibility is that the nerve itself may become inflamed, a condition called optic neuritis, which is often linked to infections and autoimmune problems. Accumulations of substances that form the so-called abrupt pathways may also occur, especially in the head of the optic nerve (the area where it starts in the blind spot).

Finally, and probably the most well-known and frequent problem that can generate blindness linked to the optic nerve, is glaucoma . This disease is derived from a progressive increase in intraocular pressure, which progressively damages the nerve.