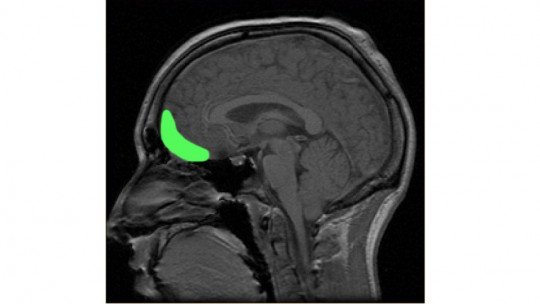 Human beings enjoy a great number of complex cognitive skills that allow them to adjust to a great extent to the environment in which they are located and the moment in which they live. They are able to plan, prepare for action, set strategies or inhibit their own behaviour. All this is very useful both in nature and in society, such as in the exchange or communication between different people and in different contexts.

It is not the same, for example, to interact with another person in the context of a conflict or a misfortune as it is at a disco party, to give an example, and being able to distinguish between them and manage behaviour to suit each situation requires complex processes. These processes do not appear out of nowhere, but are due to the action of different brain nuclei. One of the most important in this sense and which is also key to explaining much of our personality is the orbitofrontal cortex, which is the subject of this article .

A region of the cerebral cortex which is part of the prefrontal cortex and which is important in the regulation of social behaviour, decision-making and inhibition of behaviour is called the orbitofrontal cortex. This cortex is located in the frontal lobe, in both cerebral hemispheres and is situated approximately at the level of the eye orbits (which is also the reason for its name).

The importance of this area is great, being involved in a large number of functions and even in the establishment of what we call personality . This is due, in addition to its own performance, to the fact that we are dealing with a part of the brain that is highly connected to a large number of brain regions. Among its multiple connections, those which end up in the limbic system (especially the amygdala), the insula, the motor cortex, the thalamus, the hypothalamus or hippocampus, the entorhinal cortex and most of the sensory areas are noteworthy. This is also one of the areas of the brain that takes the longest to develop, not completing its formation until adulthood.

This brain region also has some historical importance because it was the area that was injured in the first known and documented case of a subject with brain injuries in the front of the brain who lived to tell the tale: Phineas Gage. This young man, whose iron bar crossed his orbitofrontal while manipulating explosives , managed to survive the injury, but after it would begin to manifest severe alterations that would complicate his existence (hostility and aggressiveness, personality changes, inability to plan…) until he lost everything. The study of this case would allow us to start visualizing and investigating the importance and functions of the prefrontal region of the brain.

Main functions of this brain region

We have previously commented that the orbitofrontal cortex is of great importance for the human being, being in fact fundamental to allow the adaptation of the human being to his natural and social environment as well as to carry out complex mental actions and future plans. Its brain connections are many, being involved in a large number of processes. Some of the best known and most explored are the following.

One of the best known functions of the orbitofrontal cortex and the one we have mentioned in the introduction is to help regulate social behavior. That is, thanks to the orbitofrontal cortex we are able to adjust our actions and words to the situations, people and types of interaction we are having at the moment. Also allows us to value social norms .

Another key function in which the orbitrofrontal cortex is critical is in inhibiting behavior. That is, thanks to this brain region (among others) we are able to not do the first thing that comes to mind, or to change our behavior as we are doing it to suit the circumstances.

It cannot be said that the personality lies only in the prefrontal cortex, but the truth is that it has been observed that the alteration of this brain region can have serious repercussions on the way a person is , being able to totally vary his way of behaving and reacting to stimuli.

Partly related to the above aspects and derived largely from its connections with the limbic system is the involvement of the orbitofrontal cortex with emotional management, especially in terms of controlling defensive and aggressive responses. It is therefore an area that allows us to be alert to threatening stimuli.

Studies carried out in relation to the orbitofrontal cortex have shown that this region of the prefrontal, especially with regard to its medial areas, is related to the sensitivity and learning of the relationship between behavior and reinforcement . Its more lateral areas do the same with the behavior-punishment relationship. In addition, it allows the existence of sensitivity towards one or the other, something that is linked to our future behaviour choices.

Although it was already suspected that there was an involvement of the orbitofrontal cortex in this, recent research has shown that this cortex is activated and allows the integration of the current sensory information with the previously accumulated information from previous moments .

Directly related to the above, it has been identified that the orbitofrontal cortex has a great implication at the time of taking decisions, given the integration of the information of the previous point and its analysis. This allows us to anticipate the choice of behavioural response that we will carry out , although this may vary depending on the new experiences.

Another area in which participation of the orbitofrontal cortex has been seen is in the capacity to motivate oneself , especially when it comes to having initiative towards or maintaining behaviour. It also influences behaviour planning.

What problems can arise from your injury?

Given some of the multiple functions of this brain region and the importance of these in our daily lives, it is easy to imagine the kind of difficulties that can generate your injury.

It is common for lesions of the orbitofrontal cortex to lead to the appearance of aggressive behaviour, limitations in the capacity to bond with others and have empathy , social dissociation and disobedience of social norms, apathy, inability to generate, initiate or maintain plans and a high level of disinhibition that includes difficulties in controlling their impulses (including addictions, sexual activity, eating or aggression) and which may lead to legal problems. In fact, there is a specific syndrome that refers to the appearance of these symptoms by brain injury: orbitofrontal syndrome.

The lesions themselves can be caused by different types of injuries, such as head trauma, lacerations (such as Phineas Gage), the presence of brain tumors, or infections or strokes.