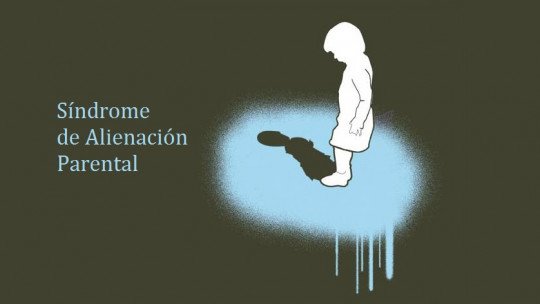 The separation of a marriage is not easy for those affected, and it seems incredible the reaction they can have to the other party. The hatred that they are capable of feeling for each other has attracted the attention of many psychologists, since the often unimaginable contempt that can be seen in this situation masks the love that the ex-partner may have felt in his or her day.

But the problem gets worse when there are children involved . They can suffer more than anyone else from this painful situation. Especially when parents use them to hurt each other. This is known as Parental Alienation Syndrome .

What is Parental Alienation Syndrome?

The Parental Alienation Syndrome (SAP) is a set of symptoms that are the consequence of the use of different strategies by a parent, in which he influences the thinking of the children with the intention of destroying the relationship with the other parent.

SAP can occur when the child is influenced by one parent (Parent A) to reject the other parent (Parent B). For example, Parent A may tell the child that Parent B does not want to visit, when, in fact, Parent B is working.

On many occasions, this type of negative influence, used repeatedly, causes the child to reject the other parent .

It is necessary to reflect on the Parental Alienation Syndrome and the real danger of parents who use this type of behaviour to harm their ex-partner, since the child is the one who really suffers the negative consequences of this situation . But this issue must also be treated with care, since some parents, for their legal defence, may accuse the other member of the ex-partner for using SAP against him/her even though this is not true.

How do alienating parents act? These are the characteristic behaviors of parents who carry out the SAP:

Causes of this phenomenon

Why would a parent want to harm their child’s relationship with the other parent? The causes may differ from parent to parent, as each case is usually different. Here are some of them:

Preventing SAP is the best therapy

Parental Alienation Syndrome is a complex phenomenon because of the environment in which it occurs. It is a real problem that can be experienced by separated families or families that are in a phase of rupture, but it also manifests itself in the judicial sphere . There are many men and women who use their children as a weapon against the other one and induce them to have negative thoughts about the other parent.

The American Psychological Association has not recognized it as a disorder and, therefore, it does not appear in the DSM-V. But the suffering that it can cause in actors is devastating, because the emotional damage that this phenomenon causes can affect kids for the rest of their lives.

The best way to treat it is to prevent it. Because, once it happens, it needs to be attacked from different fronts. For a child to suffer from parental irresponsibility is grossly unfair. That is why the attitude of the parents towards their break-up is crucial for the well-being of their child .

Since SAP is a form of child abuse, once it has occurred and is diagnosed, it can have legal consequences. For example, the change of custody so that the child reestablishes links with the parent who has been the victim of parental alienation. Sometimes it can happen that the child refuses, and that is why the issue must be treated very carefully. Therapy is necessary to reverse the situation and, in many cases, it is the judge himself who can intervene.