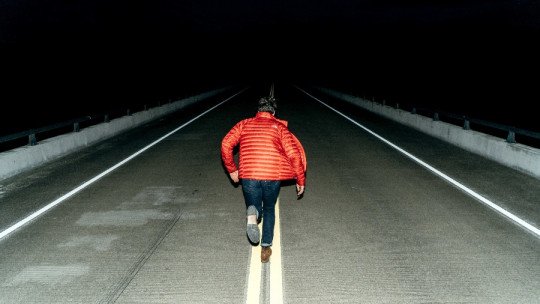 Surely, at some point in our lives, we have had the feeling that someone is watching us or even being followed on the street. When this feeling becomes a firm and permanent belief it is what is called a delusion of persecution .

In the delirium of persecution or persecutory delirium, the person lives with a series of irrational ideas and beliefs in which he believes he is being persecuted, spied on or that different people or organizations are going after him; almost always with the intention of attacking or causing some kind of damage, both physical and psychological.

This condition is lived with great anxiety and can involve all thoughts or aspects of the patient’s daily life, conditioning their relationship with anyone else.

What is persecutory delirium? Definition and characteristics

According to the latest edition of the DSM-V diagnostic manual a delusion would consist of “a false belief based on an incorrect inference regarding external reality, which is firmly held, despite the fact that almost everyone believes and despite how much it constitutes incontrovertible and obvious proof or evidence to the contrary”.

In other words, a delusion is a completely irrational belief, without any demonstrable basis . A belief that the patient holds despite being shown to be false.After clarifying this we can explain the delusion of persecution as the false belief of being followed, harassed or bullied by one or more people.

This can be a very serious condition for the patient, since the patient’s general thinking is inserted into irrational thinking; making all the patient’s mental processes revolve around his delirium.

The main characteristic of delusions of persecution is the presence of alterations in the content of thought, above all, due to distorted or false interpretations of the context or situation surrounding it .

A person who manifests delusions of persecution may think that his neighbors, or anyone with whom he crosses a look, are watching him.

Inferences made by someone with this disorder can be strident and random, so no specific stimulus is needed for the person to associate it directly with his or her delirium.Still, despite the characteristics of this deformation of thought, there are common thoughts characteristic of delirium of persecution .

1. Being followed by someone

It is the most common of all ideas and consists of the belief that one or more people follow him continuously. In addition, it is common for the person to associate this stalking with an intention to harm him or her.

For example, the person chasing you does so with the intention of killing you.

Often patients with delusions of persecution think that in addition to being followed by someone, that someone is doing it with the intention of spying on them for some reason. Hence, many of the people who suffer them try to hide continuously, causing a situation of insecurity and extreme anxiety.

Another very common feature in the delirium of persecution is the emergence of ideas of torment or continuous damage. These people may believe that those who persecute them are making their lives impossible through small acts or situations.

In this case the subject may think that every time he doesn’t find something it’s because someone is hiding it from him.

Finally, one of the thoughts included in the delusions of persecution is that whoever follows him does so with the intention of ridiculing or mocking him.

In spite of all the above, the manifestation of delirium does not constitute a pathology by itself, but rather it arises as a symptom of some of the psychological alterations that follow.

These delusions can also appear in the manic and mixed episodes of bipolar disorder and in severe depressive episodes with psychotic properties.

Other pathologies in which we can find them are:

Types of delusions of persecution

There is not only one type of delusion of persecution, but these are divided into two types according to whether the damage the person thinks will be inflicted is physical or psychic .

When the damage is physical, the subject feels besieged by people who want to cause physical harm. Damages like beating him up, running him over, or even killing him.

However, if it is presented in a psychic way, the patient believes that the aggressions follow each other on a moral level. Attempting to discredit, mock or amuse him at his expense.

Since these beliefs and ideas are usually extremely extravagant and not very credible, it is relatively easy to identify and diagnose them as delusions.

Even so, for a correct diagnosis, it is necessary to take into account a series of previous factors.

1. Differentiate between delusional and overrated ideas

It is absolutely essential to make a differential diagnosis between a delusional idea and a common belief of the patient but which is overvalued. For example, this can be complicated when dealing with beliefs and ideas based on religion .

Furthermore, when delusions of persecution are diagnosed, we must make sure that both the irrationality and the degree of conviction are absolute; since this is an unmistakable sign of delirium.

2. Detect changes or fluctuations in mood

If the delusional beliefs appear only during episodes of mania, major depression, or mixed, we are probably dealing with a mood disorder with psychotic symptoms.

However, if it manifests itself without any type of mood disorder, it should be diagnosed as schizoaffective or schizophreniform disorder .

3. Investigating the causes of delirium

Since persecutory delirium is a symptom within a broader pathology, it is necessary to evaluate the patient’s condition and symptomatology . With the intention of diagnosing some of the related pathologies mentioned above.

4. Rule out medical pathology or substance use as a cause.

As mentioned in the section on the aetiology of delusions of persecution, these may sometimes be the result of the consumption of drugs or psychoactive substances, or may even be the result of certain organic diseases.

So a medical examination or evaluation of the substances consumed by the patient is essential to place these delusions in the correct diagnosis.

It is essential to treat the delusions of persecution as soon as possible , in order to stabilize the patient and make the delirious ideas go away; even to hospitalization if necessary.

Therefore, pharmacotherapy is an essential initial phase for the person’s improvement, being antipsychotic drugs, such as risperidone or haloperidol, the drugs of choice for these symptoms.

In addition, when persecutory delirium is accompanied by high levels of anxiety or agitation, the administration of anxiolytic drugs such as benzodiazepines is common.

However, when delusional beliefs are caused by substance use or a medical illness, these conditions need to be treated as well, since they are the initial cause of the disorder.

Once the patient is stabilized, psychological treatment is added, both at individual and family level . The most effective therapies to combat delusional ideas have been cognitive-behavioral ; as well as social skills training and rehabilitation measures.