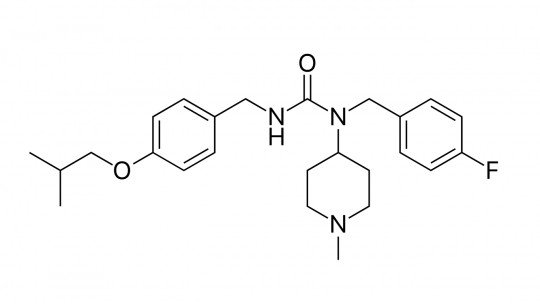 Psychotic symptoms do not only appear in psychotic disorders such as schizophrenia or delusional disorder. They also appear frequently in some dementias, such as Parkinson’s dementia and Alzheimer’s dementia.

Pimavanserin is a third generation antipsychotic that was approved in 2016 for the treatment of psychosis in Parkinson’s disease . Other effects it may have are still being investigated to treat symptoms such as agitation and depression in Alzheimer’s disease, for example.

In this article we will know its characteristics, mechanism of action, uses and adverse effects, as well as the results of clinical trials conducted with this drug of recent appearance.

Pimavanserin: what is it and why is it effective?

Pimavanserin is a recent antipsychotic, specifically an atypical antipsychotic, and considered third generation . It is marketed under the name of Nuplazid, and is synthesized by the laboratories Acadia Pharmaceuticals.

This is a drug that has recently been found to be able to relieve psychotic symptoms in people with Alzheimer’s disease without causing the usual side effects of other antipsychotics, such as risk of relapse, stroke or death.

However, it has so far only been approved for use in treating psychoses that occur in patients with Parkinson’s dementia.

On the other hand, Parkinson’s disease is a pathology that can end up developing a dementia (and this occurs in many cases); we usually know it by its motor symptoms (tremors, rigidity…), but in many cases of Parkinson’s patients, psychotic symptoms also appear, such as delusions and/or hallucinations.

This latest finding allowed the FDA (the US government agency responsible for regulating drugs and other products) to approve pimavanserin for that indication in April 2016.

It should be noted that the authorization of pimavanserin was based on the results of a single 6-week, placebo-controlled trial involving 199 patients with Parkinson’s disease, all of whom had symptoms of hallucinations and/or delusions (psychotic symptoms).

Another relevant fact is that the patients who participated in the clinical trial with pimavanserin did not worsen their primary motor symptoms.

Pimavanserin was named “innovative therapy” by the FDA ; thus, its approval as a treatment for psychoses in patients with Parkinson’s dementia, was a logical step.

The designation of “innovative therapy” given by the FDA, is awarded to those drugs that, according to preliminary clinical evidence, can improve the symptoms of patients with serious diseases, and notably.

Pimavanserin, on the other hand, has a different mechanism of action from that usual in classical antipsychotics; what it does is block a specific serotoninergic nerve receptor, called THT2A or 5HT2A.

This receptor has been related to memory processes, cognitive functions and other organic functions; it is believed to play a mediating role in them.

As we have seen, pimavanserin is an atypical antipsychotic that is approved as an indication for treating the psychotic symptoms associated with Parkinson’s dementia (it is marketed under the name “Nuplazid”).

In addition, a recent study has also found that pimavanserin can alleviate psychosis in patients with another type of dementia , Alzheimer’s dementia, although research is still ongoing and no conclusive statements or conclusions can yet be drawn. Specifically, pimavanserin would reduce the frequency and intensity of psychotic symptoms in dementias (usually hallucinations and delusions).

Thus, pimavanserin is currently under development (research) in relation to the possibility of treating possible cases of psychosis, schizophrenia, agitation and major depressive disorder in patients with dementia due to Alzheimer’s disease.

Pimavanserin is taken orally, in “tablet” format. It is usually given once a day and can be taken with or without food. It is recommended that it be taken at the same time each day, as with other drugs.

As we already mentioned, the mechanism of action of pimavanserin is different from the usual mechanism in antipsychotics, which block the dopamine D2 receptors in the brain (being dopamine antagonists).

In the case of pimavanserin, it is a reverse agonist and antagonist of serotoninergic 5-HT2A receptors; it has a high binding affinity with them (it fits almost perfectly).

Pimavanserin is a well-tolerated and quite safe antipsychotic , as demonstrated by several clinical trials, conducted prior to its commercialization.

As for the adverse effects (AEs) of pimavanserin, the clinical trials mentioned showed how these were similar to those of the placebo condition . Specifically, these were: a confusional state and peripheral edema. These adverse effects were found in at least 5% of the patients in the trials.

An important caveat regarding the use of pimavanserin, and one that is worth knowing, is that, like all antipsychotics, it can increase mortality in older (elderly) patients with psychotic symptoms related to their dementia.
These are the adverse effects that appeared in the clinical trials, but others are also associated, such as: nausea and swelling (in hands, feet or ankles). Serious adverse effects of pimavanserin include: hallucinations, rashes, difficulty walking, confusion, hives, tightness in the throat, shortness of breath and swelling of the tongue.

It is important to see an emergency doctor in case of any of the last mentioned adverse effects.

Pimavanserin is a relatively recent drug with antipsychotic actions that has been shown to be effective in Parkinson’s dementia, to treat the associated psychosis. However, we must be cautious, because although it is already marketed, pimavanserin is still under investigation .

On the other hand, although the symptoms that we know most about in Parkinson’s patients are motor (and cognitive in the case of Alzheimer’s), psychotic symptoms also appear in these pathologies, and moreover, relatively frequently. Moreover, they cause considerable discomfort in these patients and in the people around them.

These are symptoms that can significantly interfere with the daily functioning of these patients. That is why pimavanserin can be a hopeful drug that helps to improve the quality of life of these people, decreasing their emotional deterioration and improving their psychological well-being.