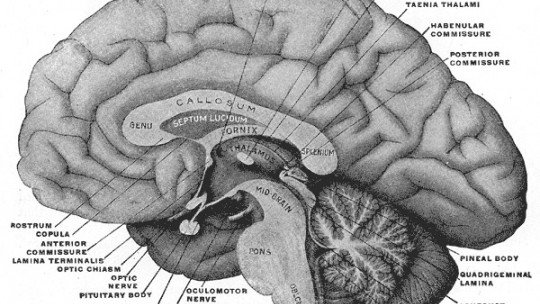 This is the case of the pineal gland or epiphysis , which in addition to being part of the nervous system is also an important part of the endocrine system.

Considered by René Descartes as the place where the animal spirits that governed processes such as sensitivity, imagination, impulsiveness or emotion lived, the nerve centre where the human soul lived, the pineal gland has been studied for many centuries .

The first records of the study of this structure date from the third century BC, in which it was proposed that it regulated the flow of thoughts. Later it would be analyzed by Galen, Descartes and other multiple thinkers and professionals from different fields. The study of the pineal gland advanced and deepened especially from the 20th century onwards, when its functions began to be scientifically studied based on the study of cases of patients with tumours in this area.

Today, we know that the pineal gland or epiphysis is a structure located in the dorsomedial part of the diencephalon, between the upper colicles and above the third brain ventricle . It is an endocrine regulation centre that participates in a multitude of different processes fundamental to the development of the organism, sending different hormones to the blood circuit.

With a shape similar to that of the cone of a pine tree (similarity from which its name derives), the pineal gland has interesting properties, since it has been demonstrated that it is photosensitive, reacting to the level of ambient light . Similarly, it seems to be affected by external chemicals and even electromagnetic waves.

The pineal gland is strongly irrigated in the blood, at a level similar to that of the kidneys. It is a structure that actively participates in the secretion of various hormones , the main one being melatonin, but it also influences the emission of follicle-stimulating hormone and luteinizing hormone. These hormones subsequently reach the blood, which carries them to their target organs.

Main functions: what is your involvement?

The pineal gland is a relevant structure linked to various situations. Being part of both the nervous system and the endocrine system, its basic function is the emission of various hormones that will alter different brain nuclei and other body systems. Specifically, we can establish that some of the main functions of this structure are the following .

The pineal gland is the part of the brain that, in reaction to the amount of light present in the environment, is responsible for secreting melatonin. Synthesized from serotonin, this hormone is involved in the regulation of circadian and infradian rhythms, so that as the main secretor of melatonin, the epiphysis has a major role in regulating the sleep-wake cycle.

When the visual information from the optic nerve reaches the epiphysis (having passed through the suprachiasmic nucleus) of the upper cervical ganglion, it indicates that environmental illumination is low or non-existent. The pineal gland then proceeds to secrete the hormone known as melatonin , which will later be sent to different brain regions. In the presence of illumination, however, the production of melatonin is inhibited.

Some of the medical cases that in modern times have stimulated research into the pineal gland reflected a fact that was later confirmed at an experimental level: the pineal gland has a great relevance when it comes to establishing the beginning of puberty . In these cases, adolescents with tumours in this gland showed precocious puberty. Later investigations have put this fact in relation to the production of melatonin from this structure .

During the first years of life the pineal gland is strongly activated, decreasing the production of melatonin towards the age of eight-twelve, when the first physiological changes begin to take place, culminating in the transition from child to adult. Thus, through various investigations it has been shown that the activity of the pineal gland delays puberty , starting this stage of life when it is less active. In other words, another of the main functions of the pineal gland is to regulate the entry into sexual maturity.

The pineal gland actively participates in the secretion of various hormones, among which are some of those that govern the menstrual cycle in women, specifically the luteinizing and follicle-stimulating hormones.

In addition to this, by regulating biological rhythms through melatonin, the epiphysis also influences seasonal sexual behaviour in other animal species. The pineal gland interacts with other structures linked to sexuality , such as the septal nuclei, to guarantee the correct functioning of this important activity from the point of view of evolution.

The involvement of the pineal gland in the emotional realm is of great importance. In addition to other hormones with an effect on mood, the pineal gland participates in the generation of endorphins, the hormones that cause states of happiness and allow the regulation of pain . In fact, its involvement in the limbic system makes it a fundamental component of emotional processes, which depend on the interaction between the brain and the organs distributed throughout the body that secrete hormones.

Although it may not seem as relevant as the previous ones, the melanin secreted by the pineal gland participates in the pigmentation of the skin, giving a slightly dark tone in multiple species. This function is secondary, and in fact there are genetic variants of human beings in which melanin has little effect on the way skin tone changes. On the other hand, in cases of albinism this function disappears, with all the biological and social problems that this entails.

6. Participation in other aspects

Apart from its participation in the above, the pineal gland participates in other processes. For example, it has been demonstrated that has to do with the regulation of body temperature . Likewise, the hormones it generates also have an effect on aspects such as attention, concentration, memory and other higher mental functions . It must be taken into account that practically any brain structure linked to the secretion of hormones has an effect on cognition, and the pineal gland is no exception.