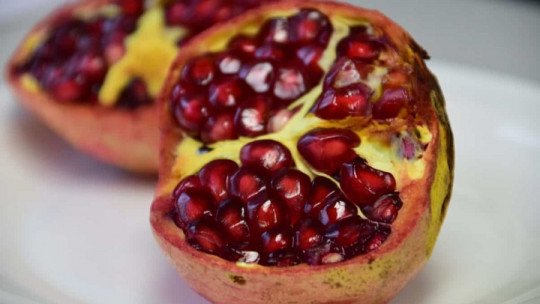 Five pieces of fruit a day . This is the recommendation that a large number of experts make regarding the need to consume vegetables in our diet in order to make it balanced and healthy. And if this recommendation is made it is because this type of vegetables contains a great quantity of essential and valuable elements for the optimal maintenance of our health.

In addition, we have a wide variety of this type of food, each with different compositions that can be more or less beneficial to us in different aspects.

One of them, which is usually not one of the first we imagine when we think of fruits, is the pomegranate. And although it is not usually taken into account as much as the orange or the apple, the truth is that we are in front of a very beneficial fruit for the health. That is why throughout this article we will emphasize the properties and benefits of the pomegranate on our health .

The pomegranate: a very healthy fruit

We call pomegranate an important and very healthy fruit from the tree Punica granatum , popularly known as pomegranate. This fruit, which on the outside resembles a yellowish to reddish bulb, is consumed today in most parts of the world despite being considered exotic. The part that is consumed is its numerous seeds or arils, fleshy and reddish in colour, which are usually extracted and used in different ways.

Although it is not the most widely consumed fruit, the truth is that it is a food that has been available and popular since ancient times in much of the Mediterranean, being known by civilizations such as the Greeks or the Egyptians and even being found in Bronze Age sites, such as Jericho. In fact, references to it can be found in the sacred texts of the Hebrew and Muslim religions, the Torah and the Koran, as well as in Christianity.

It is considered that its region of origin is located in an area ranging from ancient Persia and Babylon to India , from where it was gradually introduced to the rest of Asia and eventually to Europe (in Spain it was introduced by the Arabs during the Middle Ages) and America.

Properties and benefits of the pomegranate

The pomegranate is a very healthy and beneficial fruit, of which several very interesting properties have been discovered thanks to its rich composition in vitamins, minerals and fibre among many other elements. Specifically, the following properties of the pomegranate are often highlighted.

Pomegranate seeds contain components such as punicalagins, a type of hydrolysable tannin, and flavonoids such as cyanidine. Both groups of elements have a high antioxidant power. This helps to keep cell damage caused by free radicals at bay , as well as a lower level of cell degeneration and a slowing down of tissue aging.

2. It has an astringent effect

Thanks to its high content of polyphenols, the pomegranate has the property of helping to retain and absorb the liquid from the digested food, making it difficult to expel soft and continuous stools. This is why it is sometimes recommended for treating cases of diarrhoea. In this case, this property is more specific to the shell, with which infusions can be prepared .

Various studies seem to show that the pomegranate has the interesting property of reducing blood pressure and the risk of suffering cardiovascular problems. It has also been observed that it contributes to reducing atherosclerosis, reducing the risk of thrombosis and promoting healthier blood circulation.

Another property that has traditionally been attributed to the pomegranate is the fact that it is an aphrodisiac fruit. And some research seems to suggest that generates an increase in the level of testosterone in both sexes , as well as estrogen in the case of women, something that could contribute not only on a sexual level but also in aspects such as strengthening bones and muscles.

Also, as mentioned above, helping to prevent atherosclerosis means that the vascular system remains healthy and the passage of blood to erogenous zones is not as difficult for that reason.

Pomegranate juice and specifically one of its components which we have already mentioned, punicalagins, also has an interesting anti-inflammatory action that may be useful in contributing to improving states of inflammation in some body systems .

The pomegranate has also been found effective in the prevention of different types of cancer, such as colon cancer, in addition to interfering in some studies with the proliferation of certain tumors.

The above-mentioned antioxidant effects and the increase in testosterone in both sexes seem to be associated with better memory functioning, and may help prevent possible deterioration derived from the effects of free radicals that damage neurons .

With a high potassium content, it has been observed that the pomegranate is also a diuretic fruit , contributing and facilitating urination and the expulsion of harmful elements from the blood through urine. In addition, being rich seems to have a positive effect on the control of body fat, since in addition to being low in calories it helps reduce body fat and prevent obesity.

The consumption of pomegranate can be an interesting option for strengthening the immune system, since it provides a large amount of essential nutrients, minerals such as calcium, potassium and iron and vitamins as important as C or A .

This makes it easier for us to fight different infections and problems, as well as to prevent and combat anemia.
It is also good for tissue regeneration.

Other interesting properties of this fruit is the fact that it has been observed that it helps to fight different bacteria, fungi and even intestinal parasites, something that makes the pomegranate a useful fruit for the prevention of infections. This effect is not only achieved by consuming the arils, but is also observed in its use as a mouthwash.