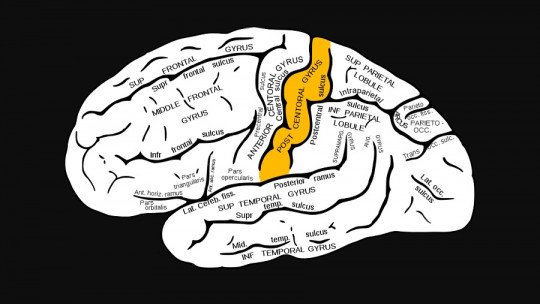 The cortex of the human brain has numerous twists and turns that give it its particular wrinkled appearance. Among these folds we can find the post-central gyrus, a structure located in the parietal lobe that contains the primary somatosensory cortex, which is in charge of processing somatic sensations (such as touch, temperature or pain).

In this article we explain what the post-central gyrus is and where it is located, what are the main functions of the somatosensory system it houses and what kind of disorders are caused when this brain structure is damaged.

The post-central gyrus is a brain convolution located in the lateral parietal lobe . It is part of the so-called primary somatosensory cortex, as it receives most of the thalamocortical nerve projections (connecting the thalamus to the cerebral cortex) from the sensory input systems.

The post-central gyrus nerve projections comprise the thalamocortical fibres of the posteromedial ventral and posterolateral ventral nuclei of the thalamus. These nuclei transmit somatosensory signals from both sides of the face and the contralateral body, respectively.

At the structural level, the post-central gyration is delimited by the longitudinal medial fissure (towards the center), by the central groove (in front), by the post-central caudal groove (behind) and by the lower lateral groove (below). Although the somatosensory crust was initially defined as part of Brodmann Areas 1, 2 and 3, it is now considered that this area should only be considered as part of Area 3.

The human body is represented by a somatotopic map in the primary somatosensory cortex that is located in the post-central gyrus, with a homunculus type pattern . This figure is usually used to describe the distorted human figure, so that the relative sensory space occupied by each of the body parts in the cerebral cortex is reflected.

Certain body areas are more sensitive and are over-represented in the sensory homunculus of the somatosensory cortex, such as the lips, hands, feet and sexual organs. The leg and genitals are represented in the medial aspect of the cortex, and the rest of the body and head in the lateral aspect.

The post-central gyrus, as we have advanced, is a brain gyrus in which we can locate the primary somatosensory cortex, which is responsible for functions such as the location of touch, changes in body temperature or vibrations ; voluntary movement of the hands; intentional swallowing; taste perception and tongue movements, among others.

The primary somatosensory cortex belongs to the somatosensory system, an indispensable part of the sensory nervous system and whose receptor cells work on the basis of heat or nociceptive (pain-related) stimuli. These can be thermoreceptors, nociceptors, mechanoreceptors or chemoreceptors, depending on the information they transmit.

The association fibres of the primary somatosensory cortex project towards the white substance of the parietal lobe and connect the post-central gyrus with the somatosensory areas of association that integrate touch and conscious proprioception (the sense that allows us to locate and move in space properly) with other sensory modalities.

Research with phobic subjects has found that cerebral blood flow is increased in the somatosensory cortex (and other areas, such as the frontal, cingulate, insular and temporal cortex) when participants are presented with the object that causes the specific phobia, with a predominance of sensations previously stimulated by images of touch.

Moreover, several studies have shown that the upper part of the post-central gyrus is activated in response to air blasts directed at various parts of the face. This appears to be a region whose function is to encode the location of objects close to, or in contact with, the face , and may be used in the nursing period.

Lesions in the primary somatosensory cortex that harbour the post-central gyrus include characteristic symptoms such as: agrafestesia, a sensory disorder that causes difficulties in the recognition of figures, numbers and letters drawn on the skin and palm of the hand; decreased or lost sensation of vibration; and reduced or lost proprioception and fine touch.

Post-central gyrus damage often leads to somatosensory disturbances in the affected contralateral side, and may also include a loss of nociception (the emission of pain signals) and thermoception (the reception of information about skin and body temperature), as well as postural sensitivity.

There are several neurodegenerative disorders and diseases that include an impairment of somatosensory functions by affecting the post-central gyrus and other related structures . We will now look at some examples:

Patients suffering from this condition show cerebral atrophy involving neuronal nuclei in the pre-central and post-central gyrus , with involvement of the primary and secondary somatosensory cortex.

Somatosensory convulsions or auras are the result of a nerve discharge affecting the post-central gyrus. Contralateral manifestations involving more or less extensive parts of the middle of the body may include tingling sensations, numbness, paresthesias or pain .

Injuries to the non-dominant parietal lobe (usually the right) can cause hemineglect, in which the opposite side of the environment is ignored even though vision is normal.

Some patients with these disorders may develop associated neurological deficiencies, such as paralysis of the limbs , although they are usually not aware of their deficits and may deny them (anosognosia).

Damage to the post-central gyrus of the parietal lobe, the dorsal columns or the dorsal root ganglia can lead to a loss of proprioception, asthereognosia (inability to identify objects by touch), loss of vibratory sensations and loss of two-point discrimination in the trunk or limbs.

When the injury occurs below the level of the spine, the loss of proprioception is ipsilateral (on the same side). If it occurs above the level of decusation of the cord, the loss is on the side opposite the site of injury.