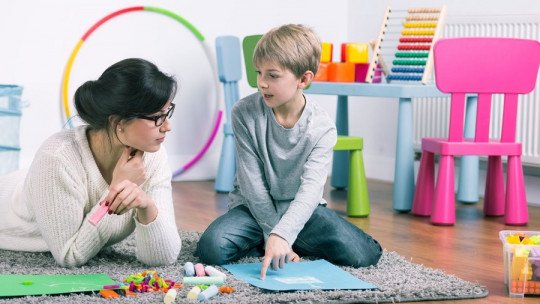 The psychological interview for children is a tool that allows the collection of information on the emotional, cognitive or behavioural situation of children. It is one of the most widely used tools for carrying out psychological assessments and interventions.

In this regard, it is important to take into consideration some questions about their design and implementation. We will see below what some of these may be.

General characteristics of the psychological interview

Generally speaking, an interview is a method of collecting information. It is a tool that allows data to be collected through a series of questions on a particular topic. As such, it is a technique that can be used for many different purposes. Depending on these purposes, the interview is structured and applied in one way or another.

When it comes to a psychological interview, the general objective is to gather information about the set of manifestations that make up a person’s psychology. That is, to know the cognitive processes, sensations, perceptions, emotions, attitudes and even behaviour .

From this, one of the specific objectives of the psychological interview can be, for example, to know the way in which a person processes or retains information, and from there to carry out a certain intervention. The interview can also focus on exploring a particular experience, or on the possible causes of some particular behaviour or discomfort .

Usually, the collection of this information is directed towards providing a type of assessment, determining the characteristics of a particular situation, or it may serve to establish a particular intervention guide.

The first case is a series of previously established questions whose order and enunciation cannot be changed at the time of asking them.

In the second case, the interviewer can set a script in advance, although at the time of the interview he/she admits the possibility of introducing new questions or omitting others . This is a more flexible type of interview.

Finally, in the open interview a particular topic is established in advance, but without the need to set specific questions, since at the time of the interview it is expected that the interviewee himself will be the one who is most free to address the specific topics he is interested in.

That said, here are some guidelines that may be important to consider when designing and applying a psychological interview for children.

The design of the psychological interview consists of determining the objectives of the interview and, based on this, the script and structure. In other words, the questions may be different according to the purpose of the interview . For example, it will not be the same script when trying to determine whether there has been an experience of domestic violence as when trying to assess the cognitive skills of the child.

When conducting a psychological interview with children, questions should be tailored to their immediate developmental zone. Depending on his age, we can hardly expect him to sit still answering closed questions for a long period of time. In the same way, it is important to avoid complex and long questions: the vocabulary must be accessible and close to the child.

Related to the above, the design of an open or semi-structured interview is recommended. That is to say, resorting to free techniques (with questions that are not answered only with “yes” or “no”) and few directives. The feeling of being in an interrogation can be a major source of stress for the child and hinder the process of the interview.

In the same sense, consider that the way the interviewer asks a question often guides or influences the respondent’s answer, especially in the case of children. To avoid this, it is important to avoid excessively specific questions as well as tones of voice or forced approaches .

5. The climate of trust

It is important to foster a climate of trust, security and freedom for the child. In this sense, the interview should be carried out in a protected environment, which allows an empathic climate , and with this, the expression of emotions, thoughts and behaviours.

In the same way, respect the silences and pauses by avoiding to push for an answer that we probably expect. This means that it is necessary to adapt to the child’s emotional situation and respect his or her own time.

When applying a psychological interview with children it is very important to take into consideration non-verbal language. This is because, according to the child’s developmental stage, his or her cognitive abilities, emotional situation and even his or her socioeconomic context, his or her linguistic resources may be limited .

Paying attention to non-verbal language, looks, silences, pauses, redness, gestures, repetitive movements, smiles, volume or tone of voice, etc., can make it easier to understand situations that are a source of conflict or satisfaction for the child.

One of the most widely used strategies for conducting interviews with children is play. Generally, games are more easily adapted to the life cycle of children than direct questions. In addition, it is a language that is close to them and appealing to them. Especially it is important to use the game at the moment of rapport , since it is the situation that precedes the interview and that allows to open the climate of confidence. It is also recommended to use it during the closing.

Again, the games used depend largely on the information we want to collect, and can range from memos to drawings or simulations of everyday life.