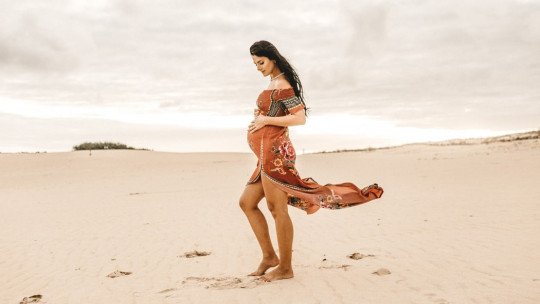 Giving birth is undoubtedly one of the most beautiful moments for most women . Having the ability to bring a new life into the world after nine months of sheltering it is something that fills every mother who wishes to be one with happiness.

But sometimes the desire to want to be a mother is so strong that, even without being one, the body begins to show the symptoms of a real pregnancy. This makes the woman herself think she is pregnant, with all that that implies.

This type of situation is psychological pregnancy, a rare but very interesting phenomenon that this article will address. Let’s see what it is, what its symptoms are, what makes it different from a real pregnancy and how it should be treated.

Psychological pregnancy, what is it?

Psychological pregnancy is the situation that occurs when a woman believes she is pregnant without being pregnant, because she is manifesting some objective symptoms typical of being in a state. They are also called phantom pregnancies or pseudocyesis, from “pseudo”, “false” and “cesis”, “gestation”.

Although some hypotheses have been put forward as to why this occurs, the truth is that it is not entirely clear why this type of false pregnancy occurs in the human species . One of the possible explanations that have been put forward is that, when there is a very strong desire to become a mother, the mind ends up influencing the body, causing a whole series of symptoms typical of pregnancies.

Physical reactions that manifest themselves through mental causes are called psychosomatic reactions, therefore, psychological pregnancies are sets of psychosomatic symptoms. This is why gynaecology specialists need to address this type of case very clearly and in depth, given that, despite there being no real pregnancy, the body behaves as if there really were one.

As we have already said, in psychological pregnancy a woman believes that she is actually carrying a baby, and may manifest some objective symptoms that would indicate, at first sight, that she is indeed pregnant .

On the other hand, prolactin and progesterone levels rise, which are behind several symptoms also typical of the actual pregnancy. Progesterone causes tiredness and sleepiness, while prolactin is responsible for the secretion of milk from the breast, even if there is no baby to feed.

There are some digestive disorders, such as constipation, nausea and vomiting , which can occur at any time of day. In addition to suffering from cravings and a greater sensitivity to certain smells and tastes.

One of the symptoms that contribute to a woman thinking she is really pregnant is that her belly and breasts grow, the latter becoming especially sensitive. Added to this is the fact that she feels movement inside the uterus, as if there were really a fetus forming, and she has the feeling that she is kicking.

Other symptoms suffered by women with a phantom pregnancy that are common in real pregnancies are dizziness, enlargement of the uterus and softening of the cervix, weight gain and, in some cases, high levels of gonadotropin.

When the differential diagnosis is made, that is, to find out if it is really a real pregnancy or, if not, a pseudo-cyesis, there are two quite enlightening indicators. On the one hand, there is the fact that the navel is not facing outwards and, on the other, that the weight gain is greater than expected in a normal pregnancy.

However, what makes it clear definitively that this is a fictitious pregnancy are the negative pregnancy tests and ultrasound scans where no fetus has been found.

There are several causes that may explain why a woman thinks she is really pregnant . After all, this type of situation manifests itself in a psychosomatic way, that is, the mind has generated physical symptoms in the woman’s body.

One of the most common causes is a woman’s desire to get pregnant but having trouble doing so. This situation often occurs in women who have had fertility problems, a history of multiple miscarriages, or in the most severe cases, the loss of a newborn child. Living in a sexist environment where being a mother is seen as fulfilling every woman’s life goal also encourages fictional pregnancies.

Another cause is that women are about to enter menopause, but they are afraid of this new period and create a whole repertoire of stereotypical beliefs about it, such as the loss of youth and “productivity”.

There are also cases of phantom pregnancies in those women who fear staying in the state . Although this may even seem counterintuitive, the truth is that this can often happen in young girls who have just started their sexual life and come from conservative families.

In couples where there are problems, having a child is sometimes seen as the solution. This can encourage a woman to believe that she has indeed become pregnant and that the tension with her boyfriend or husband has ended. Becoming pregnant may also be seen as the reason why the couple will spend more time with the woman, receive more attention and, if it should happen, delay the breakup.

Telling a woman that she is not pregnant when she has been believing the opposite for months is not an easy task . It requires a high degree of delicacy and the cooperation of the couple.

As already mentioned, the causes behind suffering a psychological pregnancy can be varied and the woman may have a repertoire of beliefs and desires that “justify” her pregnancy. For this reason it is necessary to show her that she is not really in a state, but to do so in the gentlest way possible to avoid emotional problems when receiving the upset.

Thanks to the advance of technology, especially applied in the field of medicine, it is possible to demonstrate very objectively that a woman is not pregnant. As we have already said, ultrasound scans and pregnancy tests, among other techniques, make it possible to prove that one is not pregnant. Sometimes, this is enough to put an end to pseudocyesis and the symptoms disappear over time.

However, other women do not believe it, either because they have believed the lie for a long time or because they want a baby so badly that they refuse to admit the reality.

The first professional that the woman will have gone to will have been her gynecologist , who should make sure to show all the objective tests that confirm that there is no pregnancy and, if possible, elucidate where this case comes from. Although it is the psychologist’s task to find out the causes that have led to this situation, it is not recommended to refer the patient immediately, as there may be a high degree of reluctance to think that she has a mental disorder.

When it is time to go to a mental health professional, the psychologist will take care of following a treatment for the woman, see to what extent accepting the news has affected her mood and investigate the causes that have led to this phantom pregnancy.

If the woman, after all the effort of the gynecologist, doctor and psychologist, does not manage to understand the real situation, it is possible that the psychological pregnancy is only the tip of the iceberg of a much bigger problem, and that she is facing a case of depression, anxiety, obsessive-compulsive disorder or, in more serious cases, a psychotic disorder such as schizophrenia.

Surprising as it may seem, just as there are women who, without being pregnant, show symptoms of pregnancy, there are men who, despite the biological impossibility of their sex, also show physical signs of pregnancy.

This is called Couvade syndrome, coming from the French word “couver” which means “to incubate”.

It is not that the man thinks he is pregnant, however, he manifests the same symptoms as his boyfriend or wife who is actually in a state. If she vomits, he does too; if she has a craving, he feels like eating too; and if she gains weight, so does he.

Attempts have been made to find out a little more about this syndrome. It is believed that in normal pregnancies, 10% of men pass through Couvade syndrome , while the percentage increases to 25 in case there is a problem pregnancy.

The possibility of this happening has been considered because the man is very involved in the process of gestation that the woman is doing, although it could also be due to a need to draw attention to himself that is now focused on his partner. Another cause that could be behind this is something more serious, such as a personality disorder in the man.

The symptoms in men are very similar to those of a normal pregnancy, with mood swings, weight gain and abdominal swelling in addition to gastric problems. All of these disappear by the time a woman gives birth.