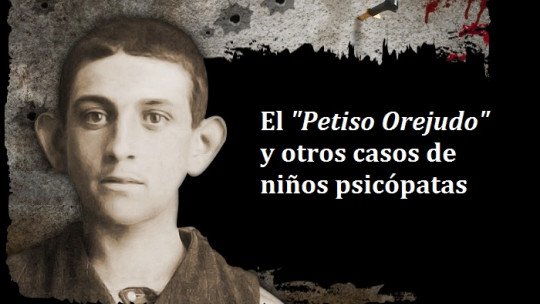 Many psychologists and psychiatrists have questioned whether it is possible for children to be psychopaths. They can be naughty and, in some cases, very cruel to other children. But how can they commit murder and show no remorse?

Since their brains are still developing and their personalities are still being forged, it is very difficult to detect the line between mischief and evil . For this reason, and in view of the cases of murders of underage children, health professionals have tried to develop tools to detect psychopathic children .

The problem arises because the tests on the market are questionnaires that predict possible psychopathy in adult life, but not during childhood. An example is the scale for detecting in children, between 6-11 years old, the traits that are prone to psychopathy in adulthood, created by Paul Frick and Robert Hare, which is called “Scale for screening antisocial development” .

As with the questionnaires, much of the research done to learn more about psychopaths has focused on the adult population. But to understand this psychopathology, it’s necessary to focus on children, since that age is key in the evolution of the disorder . Nobody doubts that the origin of psychopathy is to be found in childhood and adolescence.

From psychology, it is understood that the trait of emotional insensitivity has much to do with the presence of antisocial behavior and conduct disorders; therefore, it may be a predictor of the development of psychopathy.

Neuroscience has also provided information to answer questions that help to better understand the disorder, and from this field it is stated that there is a reduced response of the amygdala in young people with the presence of the trait of emotional insensitivity and high scores in psychopathy. An unusual response has also been found in the area of the ventromedial prefrontal cortex.

The forensic psychologist Alex Grandío, in an article by Psychology and Mind called “Psychopathy: what goes on in the psychopath’s mind”, explains: “Psychopaths have not developed a conscience or habits of respect for laws and rules that prevent other people from committing antisocial acts” . This is important to understand, since the dysfunctions presented by children and adults with psychopathic characteristics make their socialization very complicated .

The idea that a child is not inherently empathetic and is instead manipulative and dangerous to society can be difficult for many individuals to understand. But until one has heard the true story of the lives of these killers, which often includes abuse, mistreatment, broken families, etc., it seems impossible to visualize the brutality of the crimes of many of them. Therefore, the behavior of these little killers is, at least in part, a product of their environment, which must be taken into account in order to understand the behavior of many of these child killers.

Below is a list containing some of the most terrible murders committed by minors .

It is hard to accept that a child is capable of killing a person, but when the child commits multiple crimes, it is almost impossible to digest. This is what happened in the case of the little boy Amarjeet Silk . But the serious thing was not only the murder, but the parents of this little murderer, even knowing that their son had killed two people, covered up for him.

Amarjeet was only eight years old when he was arrested in India in June 2007. He was accused of having killed three babies, two of them members of his family . The first of his victims was a cousin of his who was six months old. His second victim, also a cousin of his, was less than a year old and received a beating that cost him his life. Both crimes were covered up by his parents, and he probably would not have been arrested if he had not committed the murder of a six-month-old neighbour.

Eric Smith used to ride his bike around his village every day. When four-year-old Derrick Robie was found dead, no one suspected him. The brutality of his murder makes it one of the most chilling cases.

Derrick’s body was found in a forest not far from his home and the park where he usually played. He was taken from there, where he was hanged and hit on the head with various rocks.

When Smith was questioned, the boy not only did not care about the case, but also enjoyed the attention of being questioned . He was charged with second-degree murder and is still serving a prison sentence.

Although the motive behind his murder is not yet known, jealousy seems to have been the cause of the crime committed by Jordan Brown , who killed his father’s partner in 2009, when she was pregnant.

The victim was shot in the back while lying on the bed . When her four-year-old daughter saw the body, Jordan was at school acting as if nothing had happened. Kenzie Houk, the victim, did not get along with Jordan, who warned her that he would kill her before the event occurred.

It seems impossible to imagine that a six-year-old boy is capable of murder. In May 1929 Carl Newton and his friend Cecil Van Hoose (8 years old) were looking for scrap metal to collect. Cecil stole from Carl the one he had gotten by hitting him on the head with it. After what happened, Carl decided to take revenge. Instead of fighting, he went home to get his father’s gun. Then, came back for Cecil and shot him point-blank after saying : “I’m going to shoot you”. Cecil died right there.

Carl is considered one of the youngest killers in history. He was sentenced to 15 years in juvie, but another judge found it inappropriate to try a boy of that age and he was acquitted. Cayetano Santos (better known as Petiso Orejudo ), an Argentinean boy, committed his first murder in 1906 when killed a three-year-old girl named Maria Rosa Face . He kidnapped her from the door of a warehouse and, after a failed strangulation, buried her alive in a vacant lot.

In September 1908, just 8 days apart, he tried to murder two 2-year-old boys. The first, Severino González Caló, was saved from being drowned in a cellar pool. The second, Julio Botte, was rescued by his mother after the little serial killer burned his eyelids with a cigarette.After these events, he was sent to the Marcos Paz Juvenile Colony to reform, but after a few years he left there with an even less flattering psychological picture.

While he was at liberty, in 1912 c he began to carry out murders without ceasing . On January 25, he suffocated 13-year-old Arturo Laurora. On March 7, he burns Reyna Bonita Vanicoff, three years old, alive after burning her clothes. During the month of November, he tried in less than two weeks to hang Roberto Russo and beat Carmen Ghittone and Catalina Naulener to death, but was unsuccessful. Two weeks later, he tied up, beat up, hanged and drove a 4-inch nail into Gesualdo Giordano’s temple.

In November 1914 a judge ordered his internment at the Hospice of Las Mercedes. There he attacked two patients. One of them became disabled and the other ended up in a wheelchair. After these crimes, he was imprisoned until he died in the same prison.