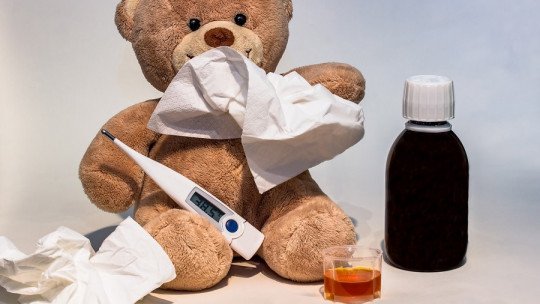 We know that there are phobias for any stimulus we can imagine. Many of them are considered “rare” phobias, because of their low frequency of appearance and/or because of the characteristics of the phobic stimulus.

Pyrexiophobia is the phobia of hallucinations from fever. That is, there is an intense fear of suffering from hallucinations in feverish states . It is a specific phobia (anxiety disorder), classified as “other type of phobia” according to the DSM-5 (Diagnostic Manual of Mental Disorders).

When you have a very high fever, sometimes one of the symptoms that may arise is hallucinations. Hallucinations are “perceptions without object”, that is, they involve for example seeing something that really doesn’t exist, or hearing it, noticing it, feeling it, etc.

Thus, hallucinations can be of different types: auditory, visual, tactile … Normally they appear associated with delusions (in psychotic disorders), although in the case of fever this is not the case.

Hallucinations also appear in other pathologies, this time more serious, as they are mental disorders and not just a simple fever. Thus, appear especially in psychotic disorders (for example schizophrenia). They can also appear in mood disorders (bipolar disorder and depressive disorder) or in a cognitive impairment disorder (dementias).

In the population without mental pathology, although it is less common, hallucinations can also appear, under highly stressful situations. Usually this is a more “physiological” type of hallucination; specifically, we are talking about hypnagogic and hypnopompic hallucinations. The former appear when we are entering a state of sleep, and the latter when we wake up.

However, in pyrexiophobia, the fear appears only in the face of hallucinations produced by the fever.

Fever consists of an increase in body temperature . This increase is usually temporary, and responds to a particular disease, infection, or discomfort. In most cases, fever is a response to infection.

What causes fever is a group of substances (endogenous and exogenous) called “pyrogens”. But how exactly does fever occur? As we said, pyrogens are the agents that cause fever. These substances act in centres of the hypothalamus (specifically, in centres called “thermoregulators”), increasing its temperature.

When can one say that one has a fever? In the case of children, a fever is considered to exist when the temperature is equal to (or higher than)

For adults, fever is considered to be present when the body temperature is between 37.2°C and 37.5°C.

As we were saying, hallucinations appear when fevers are very high. We’re talking about temperatures that can reach over 41 degrees Celsius. This type of fever is not usually caused by an infection, but by an alteration of the central nervous system (CNS).

When the body temperature is so high, the body can be damaged . In addition to hallucinations, other symptoms such as confusion and drowsiness appear. The hallucinations that appear may be of different type and intensity.

On the other hand, if the body temperature continues to rise, the damage that the body can suffer becomes irreversible; in these cases, the proteins end up losing their structure. Finally, when a temperature of 42°C is reached, the body falls into a coma, and at 43°C death ensues.

We know that high fever can lead to hallucinations. However, there are other medical pictures that cause high fever and hallucinations , and we must take them into account so as not to confuse the symptoms:

Encephalitis consists of an inflammation of the brain, which may in turn cause irritation and swelling . It is usually caused by a virus. Symptoms of encephalitis include hallucinations and high fever. However, we emphasize that in pyrexiophobia the phobia is only given to hallucinations caused by fever.

The symptoms of pyrexiophobia, as a specific phobia, consist mainly of an intense, persistent and disproportionate fear of hallucinations caused by high fever .

Another symptom of pyrexiophobia is the avoidance of phobic stimulation; in this case, the person would avoid at all costs suffering from fever (although this is a difficult situation to control). This avoidance of fever would logically imply the avoidance of hallucinations.

In addition, as with all phobias, there is an uneasiness associated with the symptoms, which affects the person’s overall functioning. This discomfort is clinically significant and interferes with the daily life of the individual with pyrexiophobia.

The hallucinations probably caused her fear, anguish, anxiety or such a degree of perplexity that the experience ended up being traumatic and causing pyrexiophobia.

Other possible causes of pyrexiophobia are related to more temperamental or personality aspects; there is a type of person more predisposed to suffer from anxiety disorders. These are people with a more insecure, unstable or “fragile” temperament. If in addition, the person already has another previous anxiety disorder, the risk may also increase .

Pyrexiophobia is treated as the specific phobia that it is. The main (and most effective) psychological treatment indicated for specific phobias is exposure therapy . Through it, we can expose the patient to situations that are increasingly anxious and closer to the phobic stimulus.

In the case of pyrexiophobia, since it would be unethical to induce a state of fever or to induce hallucinations through drugs or medication, one may choose to expose it to symptoms similar to these states. It can also be done through virtual reality exposure or through symbolic exposure (through videos).

The aim is that the patient, as far as possible in this case, will experience/feel the symptoms that cause so much anxiety (hallucinations) and that the intense fear associated with them will eventually disappear.

Cognitive techniques can also be used that allow the patient to have a more realistic view of the stimuli they are so afraid of, understanding that these do not have to cause them any harm. It is important to understand that high fevers only appear in extreme and rare cases, that many times this cannot be controlled or predicted, and that in the case of their appearance, the hallucinations that you may experience will not cause you harm either.

In the end the fever is an adaptive response of the body that is warning us that “something is not right” (coupled with hallucinations, which are difficult to avoid) and this must be transmitted to the patient, to reduce the catastrophic and pessimistic thoughts associated with pyrexiophobia.