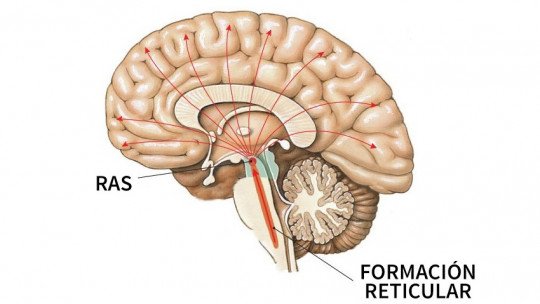 Many of the structures in the brain can be easily located and separated from the rest. However, there are others that, because they are more distributed in various parts of the brain, are harder to detect.

The reticular formation is one of these , although the fact that it is more discreet does not mean that it is less important. In fact, we need it to live and be aware of what is happening to us.

Next we will see the characteristics of the reticular formation, its functions and the problems that can appear if something interferes with its condition due to illness or injury.

What is reticular formation?

The reticular formation is a network of neurons located between the brainstem and the diencephalon , specifically the thalamus. That is, it is located in one of the lower parts of the brain, and therefore plays a key role in everything that happens in the upper areas.

Since reticular formation is a network of neurons, its limits and boundaries are diffuse, and it is not easy to know where it begins and where it ends. For example, it is practically impossible to locate it with the naked eye, and in any case it is possible to see the structures through which it is distributed in an approximate way.

The “starting point” of the reticular formation is considered to be a part of the brain stem called the ring bump, between the spinal cord and the midbrain, which then rises to the thalamus, opening wider and wider like a fan. This formation is made up of a hundred groups of neurons spread irregularly throughout the nerve tissue of these areas.

The reticular formation has a fundamental role in regulating the level of consciousness that one has , a process in which the thalamus also intervenes in particular. This means that its work has to do with the circadian rhythm and the appearance and disappearance of sleep, among other things.

Since the reticular formation is at the entrance to the brain through its areas closest to the spinal cord, it also acts by filtering the information coming from the senses, selecting pieces of data and discarding irrelevant parts, which do not reach consciousness. In the same way, its relationship with the processes of attention and consciousness means that it intervenes in the perception of physical pain and in the processes of habituation to repetitive stimuli.

In addition, the reticular formation influences involuntary and automatic movements , such as those used to maintain vital signs (heartbeat, for example). In that sense, it is one of the components of the nervous system without which we could not live.

The reticular formation can be divided into the following parts.

A region of the reticular formation which in turn is divided into posterolateral and medial nuclei.

2. Side group of cores

Divided into the reticular nucleus of the pontic tegment, lateral nucleus and paramedian.

Also known as raphe nuclei, located in the medial area of the brain stem. It is divided into the dark raphe nucleus and the large raphe nucleus.

Diseases affecting reticular formation are often very serious, as interference with this brain region leads to coma or death.

For example, advanced Parkinson’s disease can deteriorate this network of neurons, as it spreads throughout the nervous system. Similarly, narcolepsy, which is directly involved in altered states of consciousness, produces harmful effects on reticular formation.

Another of the diseases related to this neuronal network is cataplexy , whose main symptom is the loss of muscle tone; somehow, in the waking state the body begins to behave as if it were in a REM sleep phase, which means that the brain is disconnected from the muscles.

Beyond diseases linked to deterioration processes of unknown causes or to the action of viruses, injuries can also seriously alter the functioning of the reticular formation, leading to coma or brain death in a high number of cases.

This is one of the most vulnerable areas of the nervous system , not only because it intervenes directly in the state of consciousness, but also because it participates in the maintenance of basic vital functions without which sudden death occurs due to hypoxia in the brain. That is why the functioning of this region is considered a more reliable indicator of the presence of life even than the recording of electrical activity by means of techniques such as EEG in more superficial areas of the cerebral cortex.