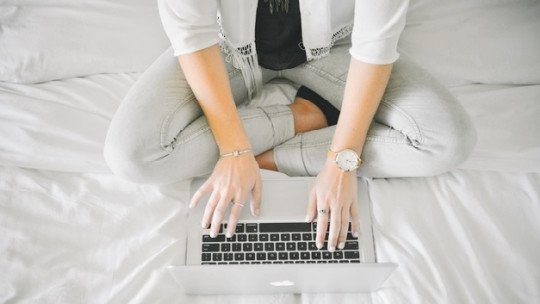 Romantic networks begins by guessing, through the example of the film You’ve got an e-mail (1998), that cybernetic romances, when detached from “the limitations of bodily interactions (…), would allow a more complete expression of the authentic self”.

But if this were the case, for example, if the Internet were to cancel out the body, one might ask what possibility there is of experiencing, by technological means, emotions (romantic or otherwise) that are inseparable from the body. This is the third of the conferences that make up Frozen Intimacies.

Based on the constant increase in the number of users of dating websites we understand how economically profitable these paid online contents are. But what is the way these websites are operated?

Dating sites ask users to create a profile by means of a questionnaire that aims to reveal the personality of each person in order to facilitate compatibility. “Thus, in order to meet a virtual other, the self is required to go through a vast process of reflective self-observation, introspection, self-classification and articulation of tastes and opinions. Therefore, participation in interpersonal compatibility websites implies at least three psychological assumptions:

In turn, the consequences of the transit through the cybernetic devices of emotional compatibility are

The author maintains that the body, absent in the rational logic of cybernetic relationships, is the greatest depository of a person’s sexual attraction, since from the tone of voice or gestures will come a transmission of attraction incapable of being recognized by the rational procedures that operate through the web in the exchange of decorporalized textual information.

On the other hand, by incompletely expressing the reality of the loved one , the body allows the idealization of the loved one to unconsciously unfold around it . Therefore, we can hardly love in the absence of an existential context that involves us with the loved one.

This is why the internet increases the gap between expectations and experience, because romantic love is mobilized when the person who loves, not having all the information about the loved one, but mainly that information offered by his or her body (“contextual and practical knowledge”), idealizes the latter through imagination.

On the contrary, since dating sites have a file of the characteristics of the users, there is no longer that absent thing that the imagination takes care romantically to make present.

The uniform management of abundance

Likewise, the disembodiment required by the Internet is compensated for by, on the one hand, a frozen image through the photographic support that shows our beauty “in a competitive market of similar photographs”, and, on the other hand, a series of linguistic conventions that facilitate the mediation between people who interact cybernetically.

With regard to this second point, it should be said that, due to the large number of diverse contacts, the interaction is conveyed by means of standardized rituals (presentations, questions, jokes, conversation topics, etc.) and reproduced “over and over again in the course of their meetings via the Internet”.

This is how the linguistic elements that mediate between the contacts are standardized into a limited repertoire. This is how the self-representation of uniqueness that makes it possible to create a profile tailored to oneself is paradoxically suspended by the uniformity required to make use of attributes that, on the one hand, are considered conventionally positive and, on the other, facilitate the management of many different interactions.

The economizing management of abundance

Dating websites use psychological categories to maximize and sophisticated within the logic of consumerism the encounters between users, even though romanticism fades in the calculation, and everything that has the love of unexpected and ineffable becomes the product of a rational choice as a consequence of an accumulated knowledge about the attributes of the other.

It is in this sense that Illouz states that “the spirit that presides over the Internet is that of the economy of abundance, in which the self must choose and maximize its options and is forced to use cost-benefit and efficiency techniques. Consequently, interaction loses its aura of surprise and, with it, its charm and magic. This is how “the internet literally structures matchmaking as a marketplace or (…) as an economic transaction: it transforms the self into a packaged product that competes with others in an open market regulated by the law of supply and demand”.

It seems as if the rationality that operates in the psychological technologies of emotions divides the self between a public sphere in which representations of the self are commodified and a private sphere imprisoned by fantasies subjected to the requirements of a market without bodily warmth.