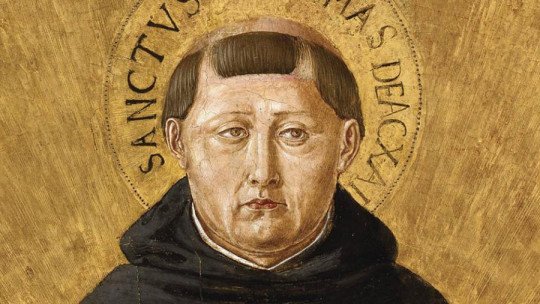 St. Thomas Aquinas (1225-1274) was a priest and theologian of the Dominican order of Roman Catholicism. He is recognized as one of the greatest philosophers of the scholastic tradition, defined as a theoretical movement that dominated much of the Middle Ages, and which uses reason to understand the religious revelations of Christianity.

We will see below a biography of St. Thomas Aquinas , as well as a brief explanation of his contributions to philosophical and theological thought.

Thomas Aquinas was born in 1225 in the kingdom of Naples, near the present day province of Frosinone. Son of Count Landulf and Countess Theodora de Theati, Aquinas soon became associated with the Hohenstaufen dynasty of Roman emperors. In fact, Aquinas’ family expected him to follow the Benedictine way, as this was the expected fate of any son of the Italian nobility.

For the same reason, Thomas Aquinas began his formation in educational and religious institutions very early . At the age of 16 he left the University of Naples, where he had studied with the Dominicans and the Franciscans, which in turn had represented a challenge for the clergy of the time.

He intended to continue his Dominican formation, which did not please his family. In fact, Thomas Aquinas’ biographers tell us that his family decided to lock him up for more than a year in the castle of Roccasecca, where he was born. This was to avoid his admission to the order.

Finally, after the confinement, he entered the Dominican School of Cologne in 1244 and the University of Paris in 1245, where he was trained in philosophy and theology by Albert the Great . By 1428 he was appointed professor, and this is the time when he formally began his academic, literary and public life.

After having been in France for many years, where he developed much of his work, Thomas Aquinas returned to Naples. He died in the same city on March 7, 1274, from a sudden illness. Some versions say that in fact his death was caused by a king of Sicily, who poisoned him because of political conflicts. 50 years after his death Thomas Aquinas was canonized and recognized as one of the most representative intellectuals of the Middle Ages.

Aquinas’ philosophical thought is one of the most influential in Christian theurgy , especially in the Roman Catholic Church. He is recognized as an important empiricist in the Aristotelian tradition, who influenced the further development of Western philosophy.

Among other things, Aquinas held that it was impossible for human beings to acquire any true knowledge without the help of God, since it is the latter who has the power to transform the intellect into action.

I was saying, however, that human beings do have the possibility of knowing a part of the world naturally (without divine intervention). There were then two kinds of components of true knowledge. On the one hand, truth is known through reason, that is, through “natural revelation.

On the other hand, the truth is known through faith, which corresponds to a “supernatural revelation” . The latter is accessible through sacred scripture and the teachings of the prophets; while the former has to do with human nature.

For Thomas Aquinas, it was possible to find rational proof of the existence of God and of his attributes (truth, goodness, kindness, power, knowledge, unity). Likewise, it was possible to know the Trinity only through special sacred revelations . More than contradictory elements, for Thomas Aquinas, reason and faith are complementary, and their search is what leads to true knowledge.

Among the previous philosophers, who had an important influence on the works of Thomas Aquinas, were Plato, the main theories of Aristotle, the Jewish thought of Avicenna, and the work of Albert the Great, with whom he was trained for many years.

Theology and argument about the existence of God

Thomas Aquinas’ theological thinking is influenced in important ways by the work of Augustine of Hippo, the Bible and the decrees of the councils and the popes. That is, combines the thought of Greek philosophy with Christian doctrine .

Taking up again the connection between reason and faith, for Aquinas, theology (the sacred doctrine) is in itself a science. And the sacred scriptures are the faithful replication of the data of that science, since they have been produced both by revelation and by natural knowledge.

For Aquinas, the ultimate goal of theology is the use of reason to know God and to find true salvation . In the same vein, he spoke of the essential properties of God, maintaining that his existence is not evident and cannot be easily tested.

In one of his great works, Summa Theologica , he sustains his ontological arguments about the existence of God: there are five ways that correspond to five qualities of God and are, therefore, rational proofs of His existence:

Likewise, Thomas Aquinas maintains that the existence of god can be verified through the movement of objects , through the hierarchy of values and elements of the world, through how natural bodies are ordered and through the world of possibilities.