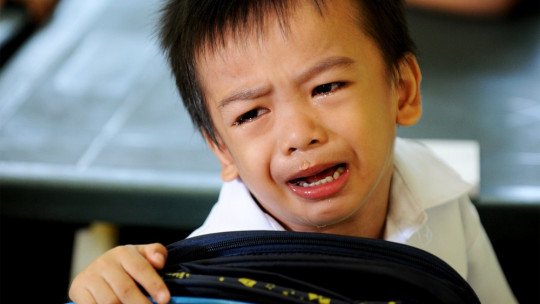 The concept “school phobia” is used to refer to situations of refusal to attend school by children and adolescents. On many occasions the anxiety and fear at the prospect of going to class is not present or does not have the intensity required for the diagnosis of specific phobia; in any case, the key aspect is avoidance of school.

In this article we will describe what school phobia is and what its symptoms and causes are . We will compare it with other similar problems that may overlap with this disorder, such as separation anxiety and specific phobias. However, it should be noted that there are no official diagnostic criteria for school phobia.

What is school phobia?

School phobia can be defined as an intense and persistent fear of going to school, although there is a certain lack of agreement about this perspective: while some authors conceive this disorder as a true phobia, others associate it rather with separation anxiety . This last point of view is the one defended by DSM-IV.

It is important to note that the most commonly used diagnostic categories do not include specifications for school phobia. The cases in which there is a real fear of school can be classified as specific phobias, a label shared by disorders such as claustrophobia, fear of insects, blood or heights.

Children with school phobia experience marked feelings of anxiety when they are at school, as well as at the prospect of going to school. Many of the children affected report that the discomfort is due to their fear of academic failure, although the causes may be diverse.

From a practical point of view the fundamental aspect of school phobia is the refusal to attend school , which sometimes leads to absences that can last weeks or months. This avoidance, a very characteristic aspect of phobias, leads to academic delays for the children and logistical difficulties for the parents.

Unlike in the case of steers, parents are aware that their daughter or son is not attending school. They also express their wish that the situation be resolved; this differentiates school phobia from dropping out, which is associated with parental neglect. Anxiety and fear are also specific to school phobia.

Specific phobias are mainly characterized by the appearance of feelings of intense anxiety in the presence or anticipation of that which is feared (the phobic stimulus), as well as by avoidance behaviors derived from this fear.

The fear of school is manifested in reactions such as crying, shouting and complaining , as well as in negativistic behaviours of refusal to obey parents. Irritability and outbursts of anger are also common forms of expression of fear in young children, less aware of their own emotions than most adults.

Moods tend to be low, with depressive-type symptoms such as apathy and sadness. Like anxiety, depressed mood distinguishes this phobia from other causes of school absenteeism. There also tends to be a significant dependence on one or both parents, and these are often people who are predisposed to anxiety.

It is common for somatic reactions to occur as a result of anxiety; these include headache and gastrointestinal symptoms , such as nausea, vomiting, diarrhoea and stomach pain. Physical and cognitive discomfort can also lead to bedwetting and problems eating or falling asleep.

The appearance of school phobia is associated with precipitating factors of a psychosocial nature. Some of them are directly related to academic life, such as changes of address and school, academic failure , the fact of repeating a grade, lack of social skills, social phobia and school abuse, usually known as bullying.

However, this fear also appears frequently in children who have recently lost a loved one, who have been affected by separation from their parents or who have suffered from an illness that has caused them to be absent from school for a while.

From the perspective of operant conditioning we can affirm that the behavior of the parents has great relevance in the development of school phobia: allowing the child to stay at home acts as a reinforcement of his or her fear of going to school . In this sense, parental overprotection and anxiety are considered very important variables.

A factor that also plays a role in school phobia is the fact that children tend to prefer to stay home from school. In many cases, this disorder can be associated with periods of increased academic demands, such as at times of exams or oral presentations of work.