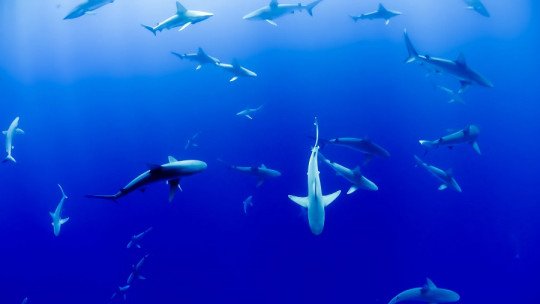 If we think of some of the most fearsome predators of the seas and oceans, probably the first creature that comes to mind is the shark.

It is one of the most lethal and effective predators of the aquatic environment, which has thrived for millions of years. There are many legends and myths that tell us about its powerful jaws and its reputation as a man-eater, something that has permeated our society and made us somewhat afraid of it.

But while it is not uncommon for there to be restlessness and fear in the presence of these creatures (they are, after all, large predators), for some the mere possibility that there may be something reminiscent of them or even their viewing in photographs may lead to the appearance of anxiety crises. We are talking about selacaphobia or extreme fear of sharks .

Selacaphobia as a specific phobia

The phobia or panic of sharks or shark fishes is called selacaphobia . It is a phobia that supposes the existence of an irrational or excessive fear in relation to the potential danger that the appearance or existence of a specific stimulus can represent. This fear generates a high level of anxiety that tends to provoke physiological, cognitive and emotional symptoms.

The fear generated by the possible presence of the stimulus, or any element associated with it, can provoke tachycardia, hyperventilation, hypersudation and in some cases could even generate anxiety crises (in which thoughts of losing control of one’s body, of dying or suffering a heart attack could appear).

In the case of selacaphobia, fear of sharks is part of the specific phobias linked to animals, and in fact could be considered a subspecification of ichthyophobia or fish phobia. Thus, the subject with this problem will feel an intense fear of the sight of sharks, whether it is directly in nature, from films or even through photographs.

It should be borne in mind that this is a phobia that has to do with animals and in this case a dangerous one, so that the existence of some concern in their presence may be natural. However, the phobic reaction in the case of selacaphobia is excessive or sustained in situations where there is no real danger that sharks may appear.

Although contact with sharks is not frequent in daily life for most people, selacaphobia can have important repercussions on a person’s daily life , especially in terms of enjoying leisure time in aquatic environments or in making it difficult to develop certain professions.

The dread of these types of animals means that not only are the sharks themselves avoided (which are difficult to find on a daily basis), but this fear can become widespread and include associated stimuli, such as movements of fins on the surface of the water, jaws or teeth reminiscent of those of a shark, or even the sight or idea of walking along the coast, going to the beach, swimming or sunbathing near the water or even in some cases seeing bathers or even a surfboard.

On a professional level, individuals such as marine biologists or lifeguards may be severely limited in their abilities by the fear of having to deal with sharks. Also surfers and swimmers may end up developing a generalized fear of water by association with the risk of being attacked.

In this sense, a phobia that may appear to be associated with selacaphobia or ichthyophobia is thalassophobia, or a phobia of the ocean or swimming in large bodies of water. In this case the link would be given by the fact that it would be in this context that real contact with sharks would be possible, which makes it very significant and anxious for the subject with selacaphobia. Also the presence of panic to sharks can contribute to increase the fear that generates the great extensions of water for the subjects with thalassophobia.

The causes of selacaphobia are not completely known, although there are multiple hypotheses and ideas about it , and it is considered that there is no single root cause but that this fear comes from a combination of factors.

One of the hypotheses that are being considered in this respect is Seligman’s theory of preparation, which stipulates that some phobias have a phylogenetically inherited component that makes it easier for us to fear certain stimuli.

This theory is often associated with a fear of spiders, snakes or insects, since our ancestors had to learn that some of these creatures were dangerous and could kill them. Those who avoided them would probably have a better chance of survival, so the tendency to avoid them was easily transmitted.

The same goes for sharks. Although they are not as aggressive as the literature and cinema in drawing them and the number of deaths they cause is relatively low, the truth is that they are really powerful predators with lethal potential. When our ancestors began to sail the seas and oceans, meeting these animals could mean death, so fear may have spread in the same way.

Another factor to consider is the way they attack their prey: usually squals attack from below, from the depths, so many of their prey cannot see the attack coming. The surprise and uncertainty of being stalked can increase the level of fear generated by approaching the environments where these animals may exist.

In addition, another possible explanation or factor to take into account is the existence of some traumatic event involving sharks. These may include having suffered an attack or witnessed one, having seen a death caused by a shark, or the circumstantial association of one of these beings with a moment of great pain or suffering.

In this sense it is also worth taking into account the role of cinema (in fact there was an upsurge of this type of phobia because of the Jaws films) and novel literature, where the figure of these beings is drawn as murderers who seek to devour human flesh (an exaggerated and erroneous figure, since most of them do not attack human beings except by mistake).

Exposure to these types of films and documents can lead to learning or association between squalor and death or pain, which may be fixed in a cognitive pattern that wakes up with some kind of stressful event.

Selacaphobia is a condition that can fortunately be successfully treated in therapy. Phobias are usually treated by exposure therapy or systematic desensitization , which is based on exposure to the phobic stimulus until the anxiety is reduced by itself or by habituation to perform behavior incompatible with it.

Both techniques assume that the subject faces the phobic stimulus, albeit gradually, and seek not so much the elimination of anxiety and fear as the achievement of the ability to manage it successfully (something that may eventually lead to its disappearance).

For this purpose, a hierarchy of stimuli is established that generate different levels of anxiety, which are negotiated between therapist and patient and then ordered based on the level of anxiety generated by each of them. Little by little and starting with those that generate a medium level of anxiety, the subject will be confronted with more and more anxious stimuli (to pass from one stimulus to another the subject will have to notify at least two consecutive times that the anxiety has been reduced to minimum or non-existent levels).

This type of exposure can be complex to carry out live, which could complicate treatment. It is still possible to make exposures to situations such as walking along the beach, swimming or sailing in the sea or even going to an aquarium to see these animals.

In addition, technological development has made it possible to generate immersive and interactive environments through the use of virtual reality , which can greatly help to treat selacaphobia or other phobias whose phobic stimulus is difficult to access. Sometimes exposure is also used in the imagination, and sometimes hypnosis is even useful.

Another type of therapy relevant in these cases is cognitive behavioural therapy, specifically cognitive restructuring. Through this, the set of cognitions, fears, expectations and dysfunctional or maladaptive beliefs that can generate or maintain fear can be treated.

Situations that may have created fear should also be addressed, especially if we are dealing with a traumatic event experienced by the subject. Information regarding the dangerousness of sharks and the myths about them should also be discussed.

Relaxation techniques can be useful to learn how to control anxiety levels, besides being able to be used as an incompatible response to anxiety in systematic desensitization. Finally, if necessary, anxiolytic drugs can be used to reduce anxiety in situations that generate excessive levels of anxiety.