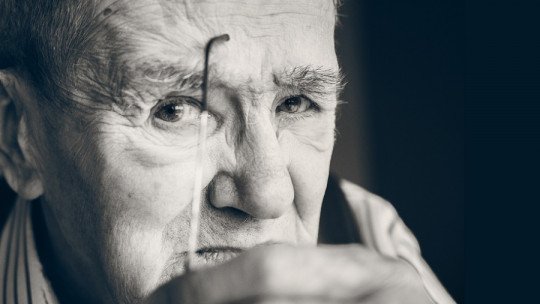 Like many other brain processes, human memory cannot be defined as a single function responsible for storing, coding, retaining and retrieving everything around us. Rather, it is divided into different types according to the way it works. When these systems fail, alterations appear such as semantic dementia , which we will address throughout this article.

But first and foremost and to clarify terms, what is semantic memory? Semantic memory gives us the ability to store everything in our long-term memory. Specifically, it refers to the memory of meanings, understandings and other conceptual knowledge.

The alteration in this type of memory causes disorders such as semantic dementia . This is manifested through difficulties in language, or the recognition of objects or faces. Even so, people who suffer from this type of illness can lead a relatively normal life.

What is semantic dementia?

Semantic dementia is a progressive neurodegenerative disorder with a focus on language. This disorder is unique in that it presents a gradual loss of semantic memory, both verbal and non-verbal.

People who suffer from it lose their language progressively and show an impoverishment of semantic knowledge . This leads to great difficulties in naming, understanding and recognizing objects, as well as in remembering names and faces.

The main cause of semantic dementia is the degeneration of the frontotemporal lobe (FTL) ; being one of the three clinical syndromes mostly associated with this degeneration.

To clarify these terms a little, the main functions of the temporal lobe have to do with memory, being the dominant temporal lobe the one involved in the memory of words and names of objects; and the non-dominant one in charge of our visual memory.

This injury may be caused by:

The person with this disorder is unable to recognize or understand visual stimuli, specifically faces, objects, or names.

This makes it difficult for the patient to interact with others and to lead a normal life in society . This implies an added risk of social exclusion. It is not difficult to understand the frustration that can be felt when you cannot recognise the people around you; including, of course, your loved ones.

During the early stages of the disorder, the patient has difficulty in finding the right words to express himself or herself; this is compensated for by the use of other associated terms. For example, if you wanted to say pen, you might say ink or pen.

As the disease progresses, the meaning of the most common words is also lost . Therefore, he could no longer use ink to refer to the pen, but would use more generic words such as tool or instrument.

Gradually, the language will become much poorer; it will end up presenting an incomprehensible discourse. Moreover, all these difficulties will also be presented in written language, so that the patient’s communication with his or her environment will become increasingly complicated.

In addition, semantic dementia can have many other characteristics:

Although there is no cure for semantic dementia, early diagnosis and drug therapy are key to the proper functioning of the patient and, consequently, improve the patient’s prognosis, providing a higher quality of life.

Since dementia diseases are complicated to diagnose, it is essential to take into account the history of the disease, and to complement the patient’s information with interviews with family members, and thus thoroughly investigate changes in behaviour and personality.

Three forms of diagnosis are more successful. They are as follows.

These tests include both verbal and non-verbal tasks, and are specified in Warrington’s Concrete and Abstract Word Synonym Test, or Howard and Patterson’s Pyramids and Palms Test (1992).

By using MRIs, a characteristic pattern of atrophy can be observed in the temporal lobes (especially on the left), affecting the lower and anterior areas to a greater extent.

Thanks to these techniques, semantic dementia can be differentiated from other subtypes of lobular degeneration such as frontotemporal dementia or progressive non-fluent aphasia.

Almost all patients diagnosed with this type of dementia test positive for both ubiquitin and PDD-43.

As noted above, there is no cure for this disorder. However, it is common to administer drug therapy to compensate for the effects associated with this disease. Some of these drugs are:

Also called atypical antipsychotics. They act on serotonin receptors as well as dopamine receptors; in this case they are used to treat the patient’s aggressive behaviors and agitations.

This drug is a psychotropic medication (acts on the central nervous system), and is characterized by its sedative, anxiolytic and hypnotic effects, among others. In semantic dementia it is used to cushion anguish, anxiety and insomnia.