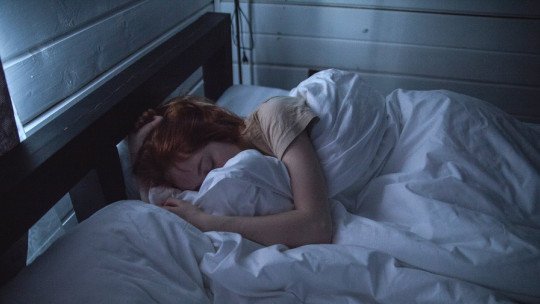 In this article we will learn about sleep apnea syndrome, a disorder that affects breathing while sleeping . We will see its types, symptoms, possible causes and treatments.

Sleep apnea syndrome: what is it?

An apnea is an episode of interrupted breathing. Thus, sleep apnea syndrome is a breathing and sleep disorder that results from the repeated collapse of the upper airway. The result it produces is a series of pauses in breathing during sleep .

Sleep apnea can occur at all ages, although it is most common in men. Depending on the type of syndrome, it occurs more often when overweight (in obstructive apnea syndrome and central alveolar hypoventilation syndrome) and in older people (in central apnea syndrome).

The diagnosis and treatment of sleep apnea syndrome are essential to achieve a more restorative night’s sleep, be more awake during the day and increase the quality of life of the patient.

Before we talk about the different forms of sleep apnea syndrome, let’s define three key concepts to understand the differences between the types of syndromes:

Thus, the three types of breathing-related sleep disorders (and which are covered by ICD-10 and DSM) are

Apneas or hypoapneas appear due to obstruction of the upper airway .

There is a hypoventilation without apneas or hypoapneas .

The most common symptoms of sleep apnea syndrome are

In addition, many times the bed partner (even someone who sleeps close to the person), may be the first person to notice the problem, by hearing loud snoring and noticing the person’s “struggle” to breathe while sleeping , in addition to the time spaces where the person is short of breath.

On the other hand, family members, as well as co-workers or students, may observe that the person is tired during the day (daytime sleepiness), or that he or she has difficulty staying alert or awake. All these signs can be symptoms of sleep apnea syndrome and should not be ignored when you go to see a doctor.

The most frequent cause of sleep apnea syndrome is a partial or total obstruction of the flow of the breathed air, produced by the relaxation of the muscles surrounding the throat and the tongue .

Sleep apnea syndrome can be life-threatening, being associated with an irregular heartbeat, high blood pressure, heart attack and stroke ; that is, it can even lead to death.

Most of the time it is related to obesity and aging (the latter in some cases).

Treatment of sleep apnea syndrome can be of several types:

Such approaches may be effective for people with mild or moderate sleep apnea , and would include the following guidelines:

Physical devices can also be effective and be used individually or in combination with the above:

Sometimes it can be very effective to use this sealed mask on the nose and mouth, or only on the nose. How does it work? The mask blows air into the upper airway so that it does not collapse while the patient is sleeping.

These can be used to create an unobstructed airway, and may be prescribed for patients with mild to moderate sleep apnea.

Other treatments that may be effective for sleep apnea syndrome are

They can be considered to permanently widen the airway; however, they are not always effective.

Actually, these do not exist at present. However, although oxygen can produce improvements, it is not in itself considered an effective treatment .