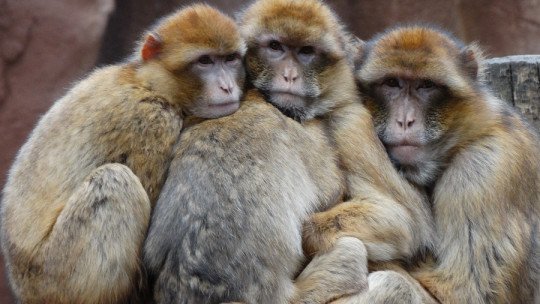 It is widely accepted that humans and other animal species behave in a certain way, instinctively.

It is true that lifelong learning and experiences influence how one acts, but the biological basis is there and regulates certain behaviors.

Sociobiology has been an approach that has tried to explain what the genetic basis of social behaviour is l, comparing that of the human being with that of other related animals.

While this approach has offered some logical explanations for behaviors such as altruism, aggression, and mating, it has not been without controversy, such as advocating that genes are everything.

Let’s see what sociobiology is, mentioning some of the most important figures in this approach and detailing some of its most remarkable scientific theories on social behavior.

Sociobiology is the approach that studies the biological bases of the behaviour of gregarious animal species , that is, those in which their individuals live in communities of several individuals. Sociobiology is a branch of sociology and biology, and combines knowledge from various sciences, such as neurobiology, ethology, ecology and genetics. Among the aspects it studies are: aggression, altruism, social hierarchy and mating.

The experimental knowledge acquired by sociobiology is based on the behaviours observed in gregarious species. Each animal species can be seen as a kind of experiment, in which the interaction between genes and environment has allowed certain behaviours to flourish.

In accordance with the assumptions of natural selection, raised by Charles Darwin, certain behaviors of the animals contribute to their greater probabilities of surviving and succeeding in reproducing. Sociobiology maintains that these same behaviors can be found in the human species, an affirmation that has generated certain controversy.

Edward Osborne Wilson is considered the father of sociobiology, however, this does not mean that there has not been interest for some time in finding the biological basis of behavior. Already Charles Darwin, in the nineteenth century, tried to explain certain behaviors that seem dangerous to individual survival but are quite widespread, not only in the human species, but also in many other animals.

One of the behaviors that has brought more headaches to evolutionism has been altruism , that is, the ability of an individual to favor another with his actions, even if his life may be in danger. What evolutionary benefit can it be to help another being if one can perish in the attempt?

Over time, several researchers managed to provide an explanation for this behavior. Even at the risk of losing the ability to reproduce and therefore pass on an individual’s genes to the next generation, helping a being whose genome is similar to one’s own allows, to a certain extent, its own genes to survive .

Based on this, the possibility has been raised that the manifestation of an altruistic behavior is directly proportional to the degree of consanguinity that the organisms involved in this action have.

Later, the British evolutionary biologist William Donald Hamilton raised the concept of class selection in 1960. Through a mathematical demonstration, he championed the idea that individuals of a species can improve their chances of reproductive success by helping their close relatives. The condition for this to be productive is that the one who is helped receives a benefit greater than the cost invested by the one who helps.

An example that would demonstrate what Hamilton said would be the behavior of the worker bees. These bees sacrifice more than drones for the common good of the hive. Drones are the product of sexual reproduction, while workers are practically clones of each other. Because workers are highly inbred, they seem to be more willing to die, as hundreds of bees have the same genomic endowment.

Although these explanations make sense, the truth is that in nature there are many situations where altruism occurs without the need for blood ties.

This is when Robert Ludlow Trivers explains reciprocal altruism . This happens when an individual receives help from another, with the implicit understanding that in the future he or she must give it back. Individuals, to ensure that they do not misinvest their energy, must distinguish between those equals who are willing to return the favor from those who are not. This sociobiological concept is considered valid when explaining the behavior of species with small social groups, as well as primates and, also, human beings.

Sociobiology applied to the human species

Trying to explain animal behavior based on its biology can make a lot of sense. After all, genetics plays an important role in how animals behave, although their interaction with the environment should not be overlooked. The controversy of sociobiology arises when it tries to transfer the same principles explained above to the human species .

As with other species, human behavior can be studied by comparing its social structure with that of other animals, especially primates. Many species of apes, such as chimpanzees, manifest behaviors that are also observable in the human species. Neither should we ignore the anatomical and biological similarities between our species and the rest of the primates.

In fact, a common aspect between primates and humans is the number of individuals that are part of the closest social network . Although numbers may vary from species to species, human and other primate groups range from 10 to 100 members, which is significantly different from the two usually found in birds and the thousands in many insect species.

Another interesting relationship found between humans and monkeys, specifically the cercopitheids, is the composition of social groups according to sex . Although culture has served as a limitation, many sociobiologists maintain that men are polygamous by nature, while women opt for strategies to select the most suitable male. In the cercopithecids, the groups are usually made up of a male and two or three females with whom he copulates.

Also in cercopithecids, a pattern of care for the offspring similar to that seen in humans has been found. During the first years, the babies are raised by the mother and, when they have grown up, they look for other individuals of the same age and sex. Social games are also given, which help them avoid aggression, encourage exploration, and may serve to regulate sexual practices.

Criticisms of this approach

Although some of the sociobiological approaches can help to understand both animal and human behaviour, the approach has not been without criticism. Sociobiology has been interpreted as a defence of genetic determinism , that is, that behaviour is programmed in the genes and that the environment has rather little influence.

One of the institutions that has attempted to provide a critical view of this approach has been the Socio-Biological Study Group. This multidisciplinary group has come to maintain that the links between human sociobiology and genetic determinism are comparable to the eugenic movement, social Darwinism, or the consideration that based on a person’s IQ he or she should have more or less employment opportunities.

Sociobiology has been accused of trying to justify the status quo of societies, arguing that the less advantaged will remain so without any possibility of improvement since education and culture could not make up for their deficits. It has also been criticized for nullifying the concept of human free will by seeking to reduce behavior to the genes.