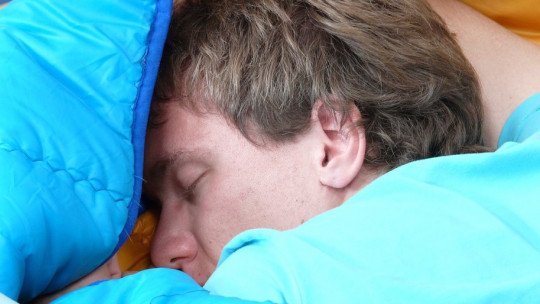 Most people know someone who talks in their sleep. Whether it is a simple emission of nonsense sounds, single words or even whole conversations in which the subject is even capable of answering questions.

It may seem a strange phenomenon, but although it is understood as a sleep disturbance , somniloquy or sleepiness is highly frequent and is not usually linked to severe problems. In this article we briefly explore the concept and what it involves.

Somniloquia or somniloquio (both forms are correct) is a parasomnia, a disorder or disturbance in which abnormal behaviors appear during the sleep period. Specifically in somniloquy the subject emits words during sleep with a complete absence of voluntariness on his part.

The intensity with which they speak can vary greatly, ranging from whispers to genuine screams. They can also have displays of emotion, such as laughing or crying. These episodes in which the subject speaks usually last no longer than a few seconds or minutes, with no subsequent memory of having spoken.

The content of speech is often unintelligible, although words and even phrases with meaning may sometimes be uttered . Sometimes small monologues are established or it may even seem that they are talking to someone in their sleep. And although in some cases people who perceive such speech may try to ask the sleeping subject something and he seems to answer, it is unlikely that he will respond directly to the stimulation.

Somniloquia is a very frequent phenomenon in children, being something normal even though it may seem worrying. It also happens in adults in an equally innocuous way, although in some cases there may be some kind of problem or disorder behind it (for example, anxiety).

Although the process that makes people talk during sleep is not fully known, and it can appear during any phase of sleep, it can be speculated that the mechanism by which somniloquy appears is similar to that which causes other parasomnias : a mismatch in the activation/inhibition of the brain areas that occur during the different phases of sleep, especially in phases 3 and 4 of REM sleep and in the REM phase (when somniloquy usually appears).

For example, during REM sleep, muscle tone decreases greatly as physiological activity increases, but in people with somniloquism the brain areas that control oral-facial muscle activity remain active and allow the subject to speak in his or her sleep. Something similar occurs during deep sleep: muscle tone is raised and sympathetic activity is reduced.

In what situations does it usually appear?

Sleepiness is very common throughout development, in children and adolescents. As we get older, however, it becomes less frequent.

It is common for somniloquism to appear associated with other sleep disorders , such as night terrors and sleepwalking. It may also appear in the presence of intoxication due to substance use, in febrile states and in times of high stress, as well as in mental disorders such as mood, anxiety and some dissociative states.

In itself, sleepiness is not harmful, but it can generate social disturbances in those who sleep with others. For example, it may cause the partner or companion to be unable to sleep properly or words, names or comments may appear that can be misinterpreted. Or may generate fear or concern in the surroundings (especially when crying, laughing or shouting appears).

Both this and the idea that something improper may be said can cause some of the people who experience it to avoid contact with their partner at night or to sleep in the same room , which can lead to problems in the relationship.

Although it is considered a parasomnia or sleep disorder, sleepiness is not considered a pathology and usually does not pose any real problem in the subject himself (although it can become a nuisance if the person sleeps accompanied). In general, therefore, it is not necessary to apply any type of treatment.

In spite of this, in cases where it is persistent or annoying , the use of relaxation and sleep hygiene is recommended, as well as creating habits that allow for efficient rest. A good preparation of the environment before sleep is usually useful, as well as avoiding the consumption of stimulants during the hours prior to the sleep period.

It should also be taken into account that sometimes sleepiness is caused by emotional or anxious problems, in which case the problems that cause them should be worked on specifically. It is also possible that the patient is afraid of sleeping with others due to the possibility of becoming a nuisance or saying something that may cause problems with his partner, which may require treatment.