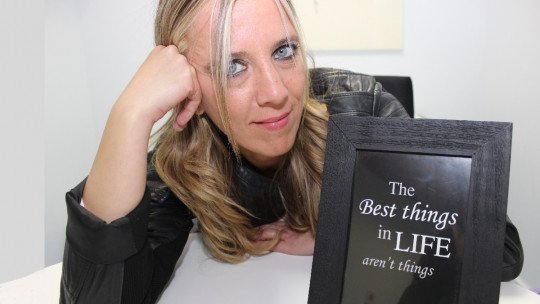 Sònia Cervantes is especially known for her role in the television programme Hermano Mayor, in which she guided young people with problems in relating to others and their families.

However, beyond her media aspect (which is not limited to her appearances in this program) Sònia is, fundamentally, a psychologist and therapist .

It is from this facet of her work, which has to do with her curiosity to understand the workings of the human mind, that her professional career as a psychologist was born, as well as two books to date: Living with a Teenager and Do You Live or Survive? The latter has been published recently, and through this interview with Sònia we intend to explore some of the ideas that have shaped the content of her pages .

Adrián Triglia : If you had to give just one example that would show the difference between “you live” and “you survive”, what would it be?

Sònia Cervantes : Surviving means going every day to the same restaurant, with the same menu and even with the probability of feeling bad again because sometimes the dishes are not completely healthy; but you have it close to home and it is the only thing you know. Surviving means trying different restaurants, varying the menu, daring to try new flavours at the risk of not liking one of them and deciding daily which one you like best.Getting out of the comfort zone. Just because it’s not bad, or even because it is, but it’s what you have and what you know, doesn’t mean it’s right.

A.T.: What kind of experiences have you had in your practice that you think have influenced you the most in writing the book?

S.C.: All those in which the people before me made a great effort to try not to suffer and paradoxically have ended up suffering. The very dangerous triad: thinking too much, dependent profile with low self-esteem and avoidant personality pattern. The Molotov cocktail to end up suffering uselessly because it is not productive suffering but quite the opposite, blocking and paralyzing.

A.T.: In your book you also point out that attention can cause us to be “stuck” constantly thinking about the possible negative consequences of our actions. What do you think are the keys to solving this?

S.C.: To live here and now without becoming persistent fortune tellers of future misfortunes. Stopping living in Ysilandia …What if I make a mistake, what if I fail, what if I fail? Or better yet, what if it does? It is the eternal struggle between confrontation and avoidance. Anticipatory anxiety, far from preparing us for the worst (something we have always been told) puts us in the worst of situations: in survival mode. A.T.: There are several elements that are usually linked to conformity and perpetual permanence in what is known as the comfort zone. For example, procrastination, or the tendency to think that everything bad that happens cannot be controlled or avoided. Which would you say is more harmful?

S.C.: Both because they anchor you to inactivity and suffering. If you were to list your top 10 fears, 9 of them would never happen. The non-reality that you put in your head is far worse than the existing reality, if there is such a film that you have formed. If it’s in your hands to change, get on with it; if it’s not, either accept the situation or change your attitude towards it. Don’t wait for things to happen, make them happen, but don’t build realities that haven’t happened yet either. When they come, you will take care of it.

A.T.: In the book you also talk about toxic relationships. Do you think this is basically a problem of how people are educating themselves in and out of schools?

S.C.: Almost everything has its origin in non-education or bad education and at the same time almost everything has its solution in education or re-education. I believe that we all educate: school, family and society. Not all the responsibility can fall on the school context. The growing presence of toxic relationships in children under 18 has been growing alarmingly and exponentially in recent years. We must be doing something wrong so that the generation with the most access to information in the history of humanity and with the most education in equality is going back to the typical macho behaviour of 60 or 70 years ago. Overprotection, misuse of social networks and certain social references of what a couple’s relationship should be are making a dent in this generation. We are encouraging insecure, dependent and low self-esteem profiles that will easily fall into toxic relationships.

A.T.: The passive attitude you point out as an element that stagnates us in our way of living life may be reinforced by distractions. Do you think that the use of the Internet, with all the information that can be found through the net, makes it easier for people to find new goals and hobbies that produce well-being? Or does it tend to be used as a distraction to kill time, rather?

S.C.: An excess of information can become a real infoxication. We are highly stimulated and bombarded daily but it is also in our hands to disconnect more often. Social networks and the fact that the Internet exists are not the cause of the problem, it is the misuse or overuse we make of it all. We should learn to turn it off daily from a certain time and dedicate ourselves to other activities and to relate to those around us. Cleaning up our phones and devices is not bad either. Is the world coming to an end if we remove the Whatsapp application, the Facebook or Twitter application from our devices? Not at all. We can call whoever we want and we can check our profiles on the networks from our tablet or computer, without having to carry them on our mobile phone 24 hours a day. Try it out for a week and then decide if you want to stay chained to your smartphone or not.

S.C.: It is clear that the key to our well-being and also to our psychological discomfort, in the absence of highly stressful events that can explain it, lies in our thoughts and in our way of interpreting reality, because even in bad times not everyone responds in the same way. It is true that positivizing our mind has very beneficial effects on our emotions and our body in general; but an excess of positivism can also be harmful. I don’t like to sell smoke or the bike with phrases like “you must be happy”, “it’s okay, think positive” because it’s not always possible. We have to learn to be bad, to deal with suffering and to accept our mental storms always with the commitment to change. Acceptance without commitment is resignation. It is useful what helps us to face the suffering, not to avoid it or make it seem as if nothing is happening.

8. There are strong criticisms directed against the philosophy of positive thinking, and one of them has to do with the idea that if we believe that our experiences depend basically on our way of thinking, if we feel bad it will be our fault as individuals. Do you think that in certain contexts optimism can be harmful?

S.C.: We are not just what we think, or even what we feel or what we do. We are the sum of all of it plus the experiences we have lived. The reductionism to that everything is in our thoughts can have the paradoxical effect of making us hyper-reflective, obsessive and generating a great feeling of guilt. It is true that our way of processing information can be a source of well-being or suffering, I do not deny that, but it is also true that we must see ourselves as something global, accept our weaknesses and stop trying to BE happy in order to seek to BE as happy as possible throughout our day-to-day lives. We have the right to be sad, to be angry, to complain, to be grumpy and even to have negative thoughts.

A.T.: Many people who are directly or indirectly involved in psychology believe that the role of psychologists is mitigated. Why do you think that is?

S.C.: I don’t share that opinion but if this is the case it may be due to many years of indoctrination by certain professionals instead of the accompaniment and re-education that a patient needs. There are many “gurus” and prophets in this profession who become deified, seriously damaging the profession in particular and its patients in general. We should not tell people what they should do, we should make them reflect on what they do and give them tools if they commit themselves to making changes in their lives. Look for three fundamental things: Self-knowledge, acceptance and commitment. Let us not forget that a psychologist is just another person who also suffers and is sad. He only plays with one advantage: he knows tools to be able to end or at least deal with that suffering. Or can’t a dentist have a cavity?