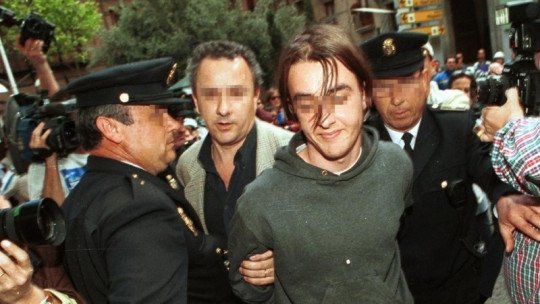 If there is one morally reprehensible act in our society, it is to take another person’s life. The reasons why some people are capable of committing an act of this magnitude are not only studied from Forensic Psychology, but from multiple social sciences.

Be that as it may, there have been absolutely dramatic cases in which a single person has been the architect of brutal murders that have shocked an entire country .

In this article we will review the most dangerous criminal killers of the last decades in Spain . For one reason or another, their actions have been widely reported in the media and have aroused the interest of many experts in Criminal Psychology.

It is possible that Manuel Delgado Villegas – known as “El Arropiero” – was the greatest assassin in the history of Spain. His nickname, Arropiero, comes from the fact that his father was in the business of selling syrup and he helped him.

This man confessed to the murder of 47 people, committed between 1964 and 1971, among the victims was his partner. According to the investigators of the case, with some of his victims he practiced necrophilia.

His modus operandi was a deadly karate chop to the front of the neck, just at the height of the nut, which he learned in the Legion . At other times he used blunt objects, such as bricks, or sharp weapons. Some of his victims were strangled to death. The choice of his victims was said to be totally random and indiscriminate, without any planning.

He seems to have shown no remorse for his actions; investigators in the case labeled him an egomaniacal and megalomaniacal man, with a total lack of empathy for his victims. El Arropiero holds the record for preventive arrest without legal protection in Spain, going as far as being pre****so without a lawyer for 6 and a half years.

Due to his alleged mental illness, he was never tried and was ordered to be admitted to a penal psychiatric hospital.

El Arropiero died in 1998 , a few months after being released.

Andrés Rabadán (Premià de Mar, 1972) killed his father with a medieval crossbow he had bought for Reyes . After the murder, he turned himself in to the police and admitted to being the author of three derailments of suburban trains, which he carried out a month before killing his father. This was a sabotage that did not result in any injuries, but it did generate a lot of fear. It could have been fatal for hundreds of people.

He murdered his father, apparently, over an argument over the temperature of a glass of milk. Killed him with three shots of arrows. Rabadan declared that he loved his father and killed him without knowing what he was doing, guided by the voices he heard. Being aware of what he had just done, he shot two more arrows at him to end his father’s suffering.

It seems that Andrés Rabadán’s childhood was not easy, as he had to deal with his mother’s suicide and the fact that he was left alone for a long time with his father, without his brothers and friends.

During expert testing for the trial, he was diagnosed with paranoid schizophrenia. By court order, he was admitted to a psychiatric prison after 20 years of confinement. According to the forensic experts, this mental illness was not enough to make him unaware of his actions while manipulating the train tracks, but he was aware of them during the commission of the parricide.

There is still much speculation today about whether Andrés Rabadán is a danger to society or whether he is socially rehabilitated: some professionals claim that he faked mental illness in order to be immune to the sentence of parricide, and others maintain that he is a narcissistic psychopath who knew what he was doing at all times, and that his self-esteem is currently sustained through the artistic and literary creations he made from prison.

In 2012 he was serving the maximum time he could be imprisoned, and he is allowed scheduled and controlled releases.

Alfredo Galán Sotillo, known as the “deck killer”, put the whole of Spanish society on edge in 2003. He is one of the most dangerous serial killers that have circulated in Spain.

He belonged to the Spanish Army from 2000 to 2004, so he had military skills. Curiously, it seems that he had a tendency to suffer from anxiety attacks, something not very common in people with a psychopathic profile.

He killed his victims with a very powerful weapon, a Yugoslavian Tokarev pistol, which he took with him to Spain from his military passage through Bosnia. He began killing in February 2003, and his first victim was a 28-year-old boy. Next to his victims he left a card, the ace of spades, which became his “signature” and became known as “the deck killer”.

According to a witness who testified in the trial, the murderer of the deck always said good morning to his victims, and then asked them “please” to kneel down . He then proceeded to shoot them. He did so because, according to him, “education comes first in life”.

In 2003 Alfredo Galan broke into a National Police station while drunk and confessed to being The Card Killer. He was sentenced to 140 years in prison for 6 murders and 3 attempted murders, although according to Spanish criminal law, he would only serve 25 years.

The conviction did not recognize the existence of any psychiatric pathology in the murderer of the deck, so he was fully aware of his actions and executed them with planning.

In 1994 a 22-year-old chemistry student, Javier Rosado, and a 17-year-old student, Felix Martinez, murdered Carlos Moreno by stabbing him 20 times, a 52-year-old janitor who was coming home at night on a bus.

The big mistake that the killer-inducer made was to record everything that happened that morning in a personal diary, which was seized by the police during the inspection of his home.
Rosado set out to be the first of the two who would kill a victim, and it had to be a woman: “I would be the one to kill the first victim”, “It was preferable to catch a woman, young and pretty (the latter was not essential, but very healthy), an old man or a child (…)”, “if it had been a female she would be dead now, but at that time we still had the limitation of being able to kill only women”.

He openly admitted that they wanted to kill without knowing the victim beforehand, since this was established by the rules he himself had set: “our best advantage is that we knew absolutely nothing about the victim, nor about the place (at least I did), nor did we have any real reason to do anything to him (…)”; “poor man, he didn’t deserve what happened to him. It was a disgrace, since we were looking for teenagers, not poor working people”.

During the trial it was claimed that Javier Rosado had a cold and calculating mind, that he lacked remorse and empathy, and that he fit the profile of a psychopath who likes to feel admired and to be obeyed. In the following excerpt from the diary, one can appreciate the lack of empathy and contempt for the victim, and even a sadistic component in his behaviour: “I put my right hand around his neck in a task of exploration that I hoped would end up causing his death. No way, that guy was immortal”, “(…) making him bleed like the pig he was. “I was pretty pissed off,” which takes an idiot to die! “What a disgusting guy!”

Javier Rosado was sentenced to 42 years in prison, and was granted the third degree in 2008. During his time in prison, it can be said that he made the most of his time, as he graduated in Chemistry, Mathematics and Computer Engineering.

Joan Vila Dilme, warden of a geriatric home in Girona , was sentenced to 127 years in prison for murdering 11 elderly people in the home where he worked between 2009 and 2010. He poisoned the elderly with cocktails of barbiturates, insulin, and caustic products, causing their death.

At first the warden in Olot claimed that he thought that in this way he was “helping” his victims to rest and stop suffering, he felt sorry for them and wanted to give them “fullness”. He was convinced that he was doing good, since he could not bear to see the conditions in which his victims lived. When he became aware of what he had done and the method he had used (ingestion of abrasive substances, something especially cruel and painful for the victims) he felt very guilty.

According to him, he had been taking many psychotropic drugs for years because he was diagnosed with obsessive-compulsive disorder with depressive episodes, and he tended to drink alcohol simultaneously on his shifts.

Later, the expert psychologists and psychiatrists who examined him argued that with his crimes he sought the power and satisfaction that came from controlling the passage from life to death, as a kind of God, and that he was aware of his actions at all times. One of the most powerful focuses of suffering and anxiety for Joan Vila was that he always felt like a woman locked in a man’s body, and he lived it in secret until he committed the 11 murders.

The final conviction proved that in the 11 crimes Joan Vila had the objective of killing and that he acted without the elders being able to defend themselves . Furthermore, it highlights that in three of the eleven cases there was overkill, as it unnecessarily and deliberately increased the suffering of the victims. The warden in Olot was not considered to have any psychological problems affecting his cognitive and/or volitional abilities, and is currently serving his sentence in a Catalan prison.