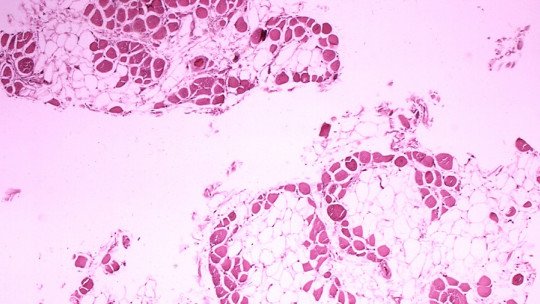 Steinert’s disease, the most common form of myotonic muscular dystrophy in adults, is a form of dystonia that affects both voluntary muscles and many other organs in the body.

Steinert’s is one of the most variable and heterogeneous diseases known, since it presents in very different ways in its severity, age of onset and systems affected: from the brain, vision and immune system to the skin and reproductive system. Find out what causes this disease and how it manifests itself in those who suffer from it.

What is Steinert’s disease?

Steinert’s disease, first described in 1909, is a type of genetically transmitted muscular dystrophy . A mutation in the gene that is involved in normal muscle function prevents the muscles from doing their job properly. It is an autosomal dominant mutation, so if one of the parents has the mutation, there is a 50% chance that the child will have the mutation.

For the diagnosis it is therefore necessary to perform the complete family history, physical examination and laboratory tests. Final confirmation is obtained through a genetic test.The patient’s blood will be tested to see if it contains the mutation of the gene described as causing Steinert’s disease. Today it is also possible to do a prenatal test and find out whether the DNA of the fetus contains this mutation and whether it will develop the disease.

Because there are many muscle disorders that can be similar to Steinert’s disease, diagnosis is often delayed because the symptoms are confused and the other diseases need to be ruled out sooner. For this reason, doctors must be very aware of the wide range of variability with which the disease presents itself and reach a diagnosis as soon as possible.

Interestingly, a phenomenon called “anticipation” occurs in this disorder. The disease is diagnosed earlier and earlier in each generation , resulting in more severe symptoms.

In addition, people with Steinert’s disease lengthen muscle contractions and are unable to relax certain muscles after using them. This is called myotonia. For example, after shaking someone’s hand or grabbing a doorknob to open a door, they may find it very hard to relax it.

The intelligence of people with Steinert’s disease is normal, but due to muscular difficulties they may have learning problems and a delay in development. Nerve damage to the feet and hands and excessive daytime sleepiness may be found, associated in part with the strain of having the muscles under strain for longer than the volunteer.

These people often feel exhausted, so they reduce their activity, affecting both their work and their daily lives. As the disease progresses, they give up pleasant activities , affecting their mood .

It is not uncommon to find cataracts in the vision of patients with Steinert, damage to the retina or drooping eyelids due to muscle weakness in the parts responsible for keeping them open.

It is common to find that newborns have breathing problems as well as lung infections. Due to muscle weakness, people with Steinert’s disease can bronchially aspirate , that is, aspirate liquids or solids through the airways, causing the lungs to become flooded. Many patients have difficulty breathing enough air and do not oxygenate well enough. As muscle tone is lost, it occurs that during sleep the airways may become partially blocked, causing sleep apneas.

Heart problems in the disease include rhythm disturbances, muscle hypertrophy, decreased blood pressure, and in some cases, sudden death. They may also have hormonal peculiarities such as insulin resistance, or premature frontal baldness in men. In addition, lower levels of antibodies are found in the blood.

The gastrointestinal system is also affected. Patients have swallowing problems and pain and swelling after meals. The digestive tract is affected in ways that include constipation, diarrhea, irritable bowel syndrome, and gastrointestinal reflux. Gallstones are very frequent , becoming a reason for intervention in up to one third of patients.

The reproductive system suffers the consequences of the disorder: smaller testicles, fewer sperm and less testosterone in men, hindering fertility. Women with Steinert’s disease, moreover, are more likely to have a miscarriage and have more problems during childbirth.

Although there is no cure for Steinert’s disease, it is possible to perform symptomatic management to improve the patient’s quality of life . In addition to a medical intervention for each specific symptom, it will be necessary to perform rehabilitative physical therapy with a physiotherapist to acquire or maintain muscle tone as much as possible.

The occupational therapy will be very useful to keep the patient active and not to fall into the helplessness of inactivity , thus preventing muscle atrophy and slowing the degeneration. A speech therapist can be very useful for those patients who have difficulties with the articulation of sounds.

The figure of the psychologist can be a fundamental help in dealing with the psychic problems that such a limiting illness entails and, above all, in reviving the patient’s motivation. It is vital that you take charge of your treatment and do not remain in a passive attitude towards your illness, for which it is good that the treatment between the healthcare team and the patient’s relatives is fluid.