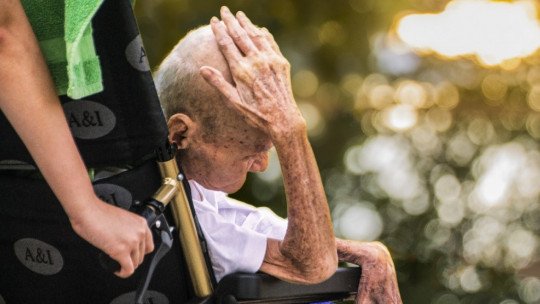 The set of diseases and disorders known as dementias are one of the biggest challenges that medicine is facing today . With an increasingly aging population, the prevalence of this type of disorder is increasing over time, with more and more cases coming to consultation.

Psychologists and neuropsychologists, as well as any other type of professional within the health field or even at a social-care level, must therefore be correctly prepared to deal with this type of patient, taking into account the possible difficulties that they may present.

Among them we can find a basic aspect that can make interaction very difficult, both to evaluate their abilities and to perform different therapies that help maintain and enhance their skills as much as possible: communication. That is why in this article we are going to mention a series of small aspects to bear in mind when talking to patients with advanced dementia .

Briefly recalling the concept of dementia

We understand dementia as a type of disorder characterized by the presence of the loss or deterioration of one or several mental faculties whose alteration generates difficulties in daily life or a decrease in the quality of life of the subject (causing a previously non-existent limitation). It is usually a progressive and irreversible deterioration , although there are some that are treatable or in some cases even complete recovery (such as those generated by infections).

This deterioration is generally due to organic causes, although in some cases the exact reason for its appearance is unknown (although neurochemical and structural alterations that generate or participate in the symptomatology are known, not because they happen). The evolution can be very variable in each case, although the tendency is towards a progressive or staggered deterioration in most cases.

How to Talk to a Person with Dementia

There are a lot of different dementias, which can affect different capacities. In many cases they end up presenting a deterioration in the capacity to attend, remember, retain or even understand and process what they are told can make it complex to treat and even evaluate them. That is why we offer below a series of indications that may be useful when treating a patient with these characteristics.

A major aspect of communicating with a dementia patient is the fact that is willing to adjust to the person’s needs . Our tone must be adjusted to what the person needs and it must be possible to understand what we are expressing. Vocalizing is fundamental.

Using excessively complex structures will make it difficult for the patient to understand. It is necessary to use a vocabulary adjusted to the capacity of the patient (and to his knowledge and level of studies) and phrases the shorter and clearer the better. Ambiguities must be avoided, and a slower pace must be used .

Whether there are problems coding new information, retaining it or simply paying attention, it can be difficult for a person with a more or less advanced dementia to grasp what is being asked of him or her in the first place. Repeating instructions may be more than necessary depending on the case.

4. Make sure she understands what you are saying

Linked to this, it is essential to ensure that the patient has understood what is being asked of him/her. This should be done in such a way that the patient does not feel ridiculed or wronged by requiring further explanations .

The fact is that many people, even if they maintain sufficient capacities, pretend to have understood what they are told out of shame or social desirability, and this is something that is actually making efficient communication difficult.

5. Tolerate frustration and don’t get upset

The fact that a person does not understand what we are trying to tell them, does not achieve an improvement or that an efficient communication channel between patient and therapist cannot be found can be frustrating. Dealing with such patients can require a certain amount of patience, as well as the awareness that the patient is not doing it on purpose.

It may seem obvious, but often the environment or even some professionals (especially those not specialized in this sector) tend to reproach in one way or another for forgetfulness or loss of faculties. The person does not forget things because he or she does not value what he or she is told: he or she is affected by a disorder that he or she cannot control and that causes him or her to be unable to store information .

Also, especially in the initial periods of dementia, patients are often aware of the presence of deficits. Reproaching will only increase their discomfort and distress in the face of the deterioration they have already perceived.

It can be difficult for a person with dementia to maintain concentration. That is why it is recommended that communication attempts be made in a context where there are as few distractions as possible. A crowded office or a turned on radio for example can easily cause the thread to be lost .

It is not uncommon for serious oral communication problems to occur. Also, in advanced stages, people with dementia may become mutated, unable to follow a conversation because they lose concentration, or even remain in a state of absence. It is important to try to find a way to communicate, as socialization is important and can be reassuring.

If oral language does not work, gestures and mime, or photos or drawings representing different concepts may be used . They can also use songs that are relevant to them. If they lose their concentration, a caress or a little squeeze on the hand can help them to follow the thread of the situation a little more.

While it may be interesting to let the patient take the first step in communicating, it can be complicated. Many dementias end up affecting the capacity to motivate action and interaction, so it will generally be more efficient for the professional to try to establish the interaction and direct it .

This is a small mistake that some people make that can alter a person’s performance on the task asked or the question asked. Making general proposals makes you first have to imagine and generate answers, as well as process the idea of whether you should do it or not. This implies a much greater effort, as well as a higher probability of confusion .

If we want you to take action, it is important to tell you what you are expected to do, in a concrete way. It is not the same to tell someone to raise a hand and ask them if they can raise it. In the first case he can do so, while in the second case it can be interpreted as a mere question to be answered. Likewise, perhaps decision-making is one of the skills that has been damaged. It may be useful to assess it, but you must take into account what you are seeing at each moment.

11. Try to use positive phrases

It is good to use instructions and phrases that express what the patient does or should do in a positive way, avoiding the use of negations that are more complex to understand.

Sometimes, something that is interpreted as a lack of memory or reasoning ability can actually be a processing speed problem. By this we mean that we should not rush and jump from one thing to another, but rather we should give the patient a reasonable amount of time to process the information and/or express himself .

13. The position, an important element

Another aspect to take into account when talking to a patient with dementia is the place or space we occupy. We must be in front of the person, facing him/her and relatively close , in such a way that our person captures his/her attention and has greater facility to observe our gestural language and listen to our voice.

14. Don’t rush to identify everything as a symptom of dementia

We must bear in mind that it is not uncommon for people with dementia or simply older people to have hearing problems, something that must be assessed when exploring a patient so as not to confuse a sensory problem with symptoms of dementia . Likewise, it is necessary to previously assess whether or not the patient has been educated, which is also relevant in terms of adjusting the tests and treatments to his/her needs.

15. Always keep him in mind and treat him as an adult and dignified person

A person with dementia is still an adult. The treatment of this person should always respect his or her dignity and should treat him or her with respect .

Even if the person is not aware of where they are or with whom, they should be treated as adults and not infantilized. They should not be talked about as if they are not present, even if they have no reaction to stimulation or language.