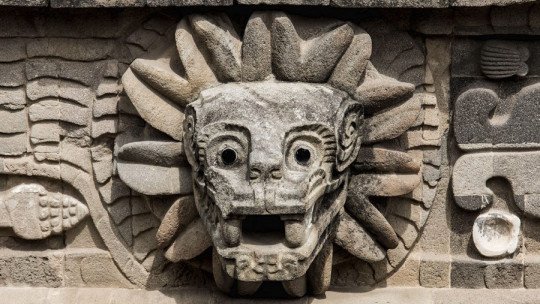 Aztec mythology is probably one of the most relevant and richest. It has given rise to books, films, legends and stories that are still present today and that have harvested a legacy of great interest in Latin America, especially Central America, in Mexico. The fundamental belief of the Aztecs revolved around the Sun, whose god was Huitzilopochtli.

As a piece of information to keep in mind, the Aztec gods are considered “original” characters , which did not have adaptations as the Roman Empire did with Greek culture and mythology, which were traced. Another element to take into account is the degree of expansion that this pre-Hispanic empire represented: the so-called Triple Alliance of the indigenous peoples of the States of Tlacopan, Texcoco and Tenochtitlan. As a result, the religion of this culture reached many parts of Central America.

The most relevant Aztec gods

Having a strong predisposition to dogma and worship, the Aztecs also developed a complex system of authority related to individuals linked to religion. This model of government was based on positions elected by the King of the day (the Toltec is the best known), with government delegates and advisors from the nobility.

Above these people, however, were the divinities that were worshipped. Next, we will see the 10 most interesting and relevant Aztec gods of their mythology .

Interestingly, the Aztecs had so-called old gods. Yacatecuhtli was one of them. He represented the protection for merchants and travelers , and for that reason the citizens made offerings to him by giving him slaves in exchange for his blessing. What stands out about this deity is the disproportion of his nose, which served as a guide/indication.

He was a little bit the god of everything: life, fertility, wisdom, of day and night, the winds . He is surely one of the most relevant deities of the Aztecs for all that he represented. It is a kind of snake with feathers and at the same time in human form.

Like his predecessor, Coatlicue was shaped like a snake (this one is integral) with four hands and three heads. She represents life and death at the same time, so she is considered the goddess of all gods, as well as the spiritual guide of the rebirth.

We continue on the path of the gods with some reptilian features. The name itself means: “the goddess of the snake in the face”. She is the goddess of the moon, whose powers, shared with the serpent that guarded it, dominated the water. She provoked madness and storms , but she blessed and watered the Aztec regions.

Totally extravagant and clownish in appearance, it contrasts with what the Aztec death deity represented. Husband of the goddess of death, Mictlantecuhtli was master and lord of the souls that went to his particular “hell” . A place of shadows and darkness that the Aztecs wanted to avoid at all costs.

Painted in red and yellow, with the face of few friends, this deity is the masculinity and virility of the Aztecs . It also symbolized youth and dawn. He was also the god of abundance, as Xipe was in charge of irrigating the corn fields of the Aztec lands with water.

Among the most important Aztec goddesses we find Cihuacoatl, the first deity to give birth, and therefore she is considered the goddess of birth. The legend also says that she is known as “La Llorona” , without knowing very well her origin. There is speculation about the crying at the time she gave birth to her first child, but this has not been confirmed to this day.

He was an idle god, he represented play and fun . He was the patron of the Aztec festivities. On the other hand, he was also the god of healing, as he took any injured or sick person to his temple to be healed, as well as to cure newborn children with some deficiency.

In this case a peculiarity is presented: Ahuiateteo is within a group of Aztec gods that represent vice, pleasure and earthly excesses. Together with another group of the Tzitzimime, they formed a conglomerate of deities representing the opposite of each other . Thus, the latter were the representatives of death and drought.

The figure of Xiuhtecuhtli corresponds to the aforementioned category of the ancient Aztec gods. His figure in the form of a warrior and with passionate colors like (red and yellow) gave him that touch of virility that warriors and soldiers were looking for. This deity represented fire and heat, and therefore was highly respected by his parishioners. He was also the patron of warriors, kings and the weather.