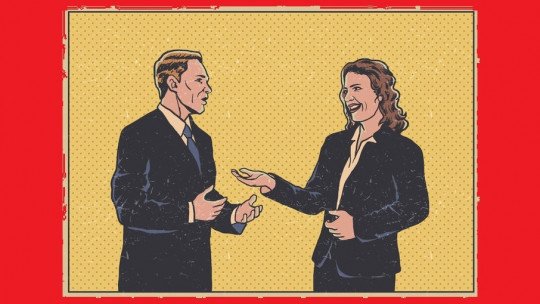 The key to connecting well with others is to go beyond words: you must know how to use good non-verbal communication. Even if we don’t realize it, we always communicate with our whole body, not just through letters, words and sentences.

The posture we use, the gestures, the expression on our face… all this speaks about who we are and what we are feeling, whether we want it to or not. Now, we can use this fact to our advantage, or let it betray us by sending the wrong message.

We will now review the
keys for using non-verbal communication in the best possible way .

Why is non-verbal communication so important?

You have to keep in mind that communication
predates the appearance of language . Throughout the evolution of the species through which our ancestors have passed, gestural communication was a tool without which it would have been impossible to pass on information to others about one’s intentions, what is happening in the environment, the presence of danger, etc.

As language appeared, the transmission of information became more precise, but the importance of non-verbal communication remained, as it was
the pillar on which the use of words and sentences had been built .

So we have evolved to express feelings and emotions throughout the body, and much of the effectiveness of this form of communication is that much of it is unconscious, being so natural. Sometimes we have trouble finding the words to express what we think, but the same is not true of gestures: we use them spontaneously.

The Basics of Perfect Nonverbal Language

Controlling the way bodies communicate, both to learn more about others and to convey the information about ourselves that interests us, is something that
can be achieved with practice and knowledge of some theoretical aspects . These can be seen below:

We often pay a lot of attention to how we gesticulate with our hands and how our interlocutor does it, but if we lower our gaze a little we will find another of the key pieces of non-verbal communication:
the placement of the legs and feet .

2. Adapt to what the other one does

Adopting a posture and gesture style similar to the other person makes it easier to connect with them.

However,
avoid “copying” those parts of the non-verbal communication that indicate distance or hostility, focus on the others (e.g. depending on the case, rhythm of gesture, degree of head nodding, etc). In this way, the other person will identify more with us.

To facilitate the emergence of a fluid relationship with someone, try to make sure that non-verbal communication expresses the idea of relaxation and tranquility. This is achieved by maintaining an open posture,
with the muscles relaxed and without keeping the extremities attached to the trunk.

4. Use the power of the gaze

Controlling the gaze allows to regulate dynamics of kindness or domination. In this way it is possible to put a lot of emphasis on what is said,
or give up a moment for the other person to expose their ideas without fear . In addition, looking at her allows you to detect some basic emotions.

Touching some parts of your own body tells us a lot about how it feels.
Many gestures that are based on touching parts of the face , such as the mouth or nose, are a sign of protection and defensiveness, a sign that there is something in the environment that produces tension.

Looking at these spaces and knowing how to control them indicates who feels most vulnerable and who feels so powerful that they invade the territory of others.

It is very important not to generate ambiguity in what you express through non-verbal communication . That is why it is necessary that your body does not send contradictory signals. If you want to transmit tranquility, do it with your whole body: don’t relax the muscles of your face while you contract your biceps to bring your arms closer to the front of your body.

Smiles have a very important social role, since they allow the creation of moments of harmony and camaraderie. However, many times they are used for commitment, and this is something you should be able to detect in order to know the person’s mood.

To know if a smile has been sincere, it is enough to analyze if crow’s feet have appeared at the sides of the eyes , if they have dropped a little and if the teeth are shown. If these signs do not appear, the smile is fake.

It is important to send signals that you are paying attention to what the other person is saying . This is called active listening, and it is based on the idea that you should give constant feedback about the impressions you get from the information the other person reveals to you. Nodding, for example, or indicating approval with other parts of the body (without interrupting the other person’s speech) is fundamental.

Fast, dry movements denote nervousness and lack of control. Avoid them to allow the other person to trust you more and open up.

The importance of practice

Thus, practicing and “training” in real time is fundamental to become proficient in the art of mastering the communication of bodies.