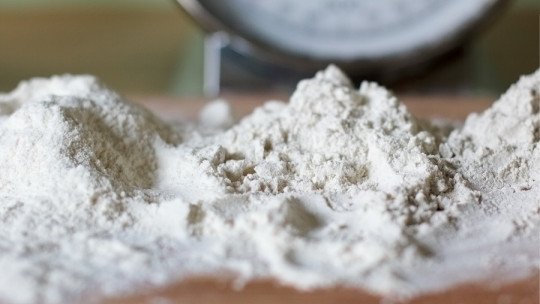 The world of flours, although it may seem somewhat bland and insipid as flour itself, is not really like that. There are countless varieties of this fundamental ingredient in every kitchen of this vast and diverse world.

Flour from chickpeas, beans, potatoes, barley, wheat and even blood! You can prepare this sand that we all have in our kitchens with practically anything, even if it is to decorate a pantry.

Let’s see below the most remarkable types of flours, their nutritional values and how they are classified according to the ingredient used in their preparation.

How many flours are there?

Surprising as it may seem, there are hundreds of different flours and each one has a different purpose. Due to the immensity of cultures on our planet, each one has its own gastronomy and, since flour is a very recurrent ingredient in every cuisine that is appreciated, it is not strange to find varieties.

The criteria used to classify flours take into account different aspects. The most important one is the raw material, that is, what the flour is made of, whether it is a cereal like wheat, a legume like lentils or a tuber like potatoes.

Another aspect that is taken into account is the degree of refinement, i.e. whether the grains are smaller or thicker. Finally, the percentage of vegetable protein, the gluten content and the strength of the flour , indicated by the letter W, are taken into account.

In European cultures, especially in the Mediterranean, heirs to the Roman triad, wheat flour and, in some cases, other flours also made from cereals, are widely used. However, thanks to globalisation and the contact between cultures, other flours more exotic to the West have become popular, which have allowed the creation of hundreds of new recipes .

The 24 most remarkable types of flour

Let’s see a classification of the main types of flour used in cooking.

Gluten is a small set of proteins found in most cereals. This substance is what gives elasticity to the bread dough while it is being made , but it is also the cause of ailments in those people suffering from coeliac disease who cannot tolerate it.

Next we will see the main flours that contain this substance.

Wheat is the cereal most used to make flour in the West , which is why there are recipes for both sweet and savoury foods that use this type of flour as raw material.

Wheat is a cereal that is very rich in nutrients, being a source of minerals such as calcium, iron, magnesium, potassium, zinc and selenium, as well as group A, B and E vitamins. It is also a source of fibre, carbohydrates and vegetable protein.

Wheat flour can be classified according to its strength, which will serve to make one type of recipe or another. First of all, we have the strength flour, whose marking is about 300 W and has a protein percentage of about 13%.

Strong flour is ideal for doughs that need to be kneaded several times and in which many fats and sugars are included, such as roscón de Reyes, panettone and croissants.

Secondly, we have the medium-strength flour, 250-260 W and with 10% protein . This flour is ideal for doughs that do not contain a lot of fat but require a lot of kneading. It is used to make pizzas, cakes and breads.

Finally, within the wheat flours we have the loose flour, which has a marking of between 160 and 180 W and about 8-9% protein. It is used in baking, has little gluten and is used in low-fat doughs. Flour does not require much kneading, and is used to make cupcakes, sponge cakes and cookies .

It is used for the preparation of low and dense breads, crackers . Because it has a certain touch of bitterness, it is not often used in baking. It was widely used in the Middle Ages and is now very present in the gastronomy of the Nordic countries.

Wholemeal rye flour has many nutrients, such as calcium, sodium, iodine, zinc, phosphorus, selenium, vitamins E and B, carbohydrates and fibre .

It is mostly used as a thickener and also to make loaves of bread that are not very fluffy. It is very common in England to make bread.

It is a source of minerals such as copper, potassium, zinc, phosphorus, magnesium, calcium, vitamins A, B and C and also provides a good supply of carbohydrates and fibre.

Of the flours containing gluten, this one is the easiest to digest because it does not have as much of this element .

It is mainly used to make low and compact breads. Among the many minerals it provides are silicon, as well as being a good source of Omega 3 and 6 and group E vitamins

This flour has a very fine texture and smooth taste. It is very popular in the United States, as it is one of the foods found in the traditional American breakfast in the form of porridge.

It is used in pastry for desserts in which the dough does not need to rise too much , such as crepes, cookies and muffins.

On the other hand, oat is a very nutritious cereal, since it offers, in addition to many of the minerals it shares with other cereals, essential fatty acids.

Fortunately for people with coeliac disease, there are certain varieties of flour that do not contain gluten or, if they do, they contain it in low quantities. Most of these flours are made from legumes, but there are also those made from tubers and pseudocereals.

Anyway, and to make sure that what you consume is gluten-free, it is advisable to look at the labelling before buying a product. It is not uncommon for a bread to be made with rice flour, but to add fluffiness, wheat flour has also been added to the dough.

Corn flour is known worldwide for being the star ingredient in the preparation of Mexican tortillas and empanadillas , in addition to being used to thicken sauces, stews and soups.

This flour is a source of multiple minerals, among which sodium, magnesium and calcium stand out.

Widely used in Asia, especially in China and Japan, this flour is the main ingredient for making tempura, in addition to making noodles and also preparing batter.

What is striking about rice flour is that, because it is made from this cereal, it has a very low amount of fibre and can therefore be very restrictive. It contains minerals such as potassium, phosphorus, selenium, iodine and magnesium, as well as being a considerable source of carbohydrates as in most flours.

Pea flour gives a greenish colour to dishes and can be used for all kinds of recipes: thickening purees, making pizzas, crepes and crackers…

This flour is very rich in vegetable protein, vitamins A and C, multiple minerals and, as it is made from a legume, it is more satiating than cereal flours.

Buckwheat is a pseudo-cereal and is widely used in various parts of Asia and Eastern Europe.

Bread made from this type of flour is very compact and does not rise very much. It is easy to digest, provides essential fatty acids Omega 3 and 6, vitamins of the B group and, as a really remarkable point, provides 9 essential amino acids.

It is used to make recipes typical of Indian cuisine, such as local breads, batter or even crepes. It goes well with all kinds of salty dishes.

Lentils are well known for being an important source of iron and, as with peas and other vegetables, helps you feel full .

As with pea flour, bean flour gives a green colour to savoury dishes and can be used for biscuits and crêpes.

It is a source of vegetable protein, dietary fiber, vitamins A and B, iron, phosphorus, calcium and other minerals and helps you get full.

This type of flour has become very popular in vegan food , since it can be used as a substitute for eggs to make Spanish omelettes. It is also used in Indian cooking.

Although the most expert chefs can create all kinds of recipes in which it does not matter what type of flour is used when preparing a sweet, the truth is that chickpea flour is not highly recommended for this purpose because it is difficult to mask the taste of this legume . It is one of the most vitamin-rich, of the B, C, E and K groups.

The potato is probably the most consumed tuber in the world, so it is not surprising that it even has its own flour. As with maize flour, that of this tuber is used to thicken sauces, stews and purees .

Because the aroma of the potato is mild, it can also be used in confectionery, an example of which is the traditional potato cake from the island of Mallorca.

Potatoes are one of the most satiating foods in existence and are also easily digestible.

It is used especially in sweet recipes, besides being ideal for preparing fillings . Almonds are very healthy, as they provide antioxidants, and you can prepare their flour at home by simply grinding a few of these nuts.

It can be used to prepare béchamel, buns, baby food, sponge cakes and to thicken stews.

These fruits contain many minerals and vitamins, and are especially recommended for sportsmen, children and the elderly.

Like chickpea flour, flax flour is ideal for making vegan versions of foods that traditionally use eggs .

It should be said that, as the seeds of this plant are rich in fatty acids, if not used soon they can go rancid.

Another tuber that, like the potato, has its own flour is the yucca or manioc.

It is widely used to thicken , in addition to preparing salty cakes to give body to its filling.

Quinoa, or quinoa, has become a well-known seed in recent years and has been the ingredient of many recipes seen as exotic in Europe.

It is grown in the Andes and provides up to 8 essential amino acids. Its flour can be used in both sweet and savoury recipes , in addition to being used as a thickener.

Not only to elaborate the popular Valencian drink of the tigernut milk, the tigernut is a tuber whose flour is used in confectionery, as creams, cakes fillings, sweet breads, doughnuts and sponge cakes. Its aroma combines very well with lemon and cinnamon.

It is used to make porridge, stews, soups and other foods in which it serves as a thickener.

This flour contains antioxidants , in addition to being a quite remarkable source of energy and vegetable protein. It is ideal for people with sensitive stomachs.

Although it may surprise some, the flours are not all of vegetable origin. Some parts of the animals can be used for processing into flour and making different types of food, but not for human consumption. They are basically ingredients used to make fertilizers and feeds. Therefore, vegans do not have to worry about finding them in recipes and meals.

Basically, it’s bones crushed into a grit. They are not used for human food, but are used to nourish animal feed with minerals such as calcium.

Similar to the previous one and for the same use. Fish bones have a significant calcium content.

It consists of the drying of animal blood, and the remaining residue is used to produce feed and fertilizers.

4. Horns and other elements

Not only the horns, but also the hooves, the poultry feathers and anything else that can be used to advantage. They are mostly used to make fertilizers .