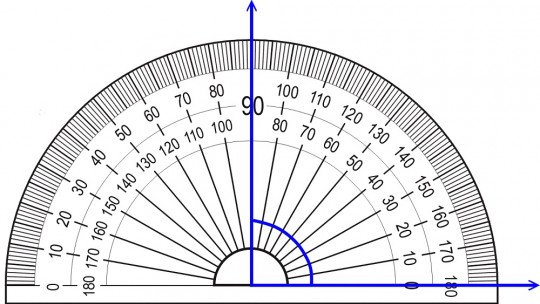 Mathematics is one of the purest and most technically objective sciences that exist . In fact, in the study and research of other sciences, different procedures from branches of mathematics such as calculus, geometry or statistics are used.

In Psychology, without going any further, some researchers have proposed to understand human behavior from the typical methods of engineering and mathematics applied to programming. One of the best known authors in proposing this approach was Kurt Lewin, for example.

In one of these, geometry, we work with shapes and angles. These shapes, which can be used to represent areas of action, are estimated simply by opening up these angles placed at the corners.In this article we will look at the different types of angles that exist .

The angle a is the part of the plane or portion of reality that separates two lines with the same point in common . It is also considered as such the rotation that one of its lines should carry out to go from one position to another.

The angle is formed by different elements, among which the edges or sides that would be the straight ones that are related, and the vertex or point of union between them stand out.

Below you can see the different types of angles that exist.

A type of angle that is between 0 and 90° , not including the latter, is called such. An easy way to imagine an acute angle can be if we think of an analog clock: if we had one fixed hand pointing at twelve and the other before it was a quarter past twelve we would have an acute angle.

The right angle is that which measures exactly 90°, the lines being completely perpendicular. For example, the sides of a square form 90° angles to each other.

The angle between 90° and 180°, not including them, is so called. If it were twelve o’clock, the angle that the hands would make between them would be obtuse if we had one hand pointing to twelve and the other between a quarter and a half .

That angle whose measurement reflects the existence of 180 degrees. The lines that form the sides of the angle are joined in such a way that one looks like an extension of the other, as if they were a single line. If we turn our body around we will have made a 180° turn. On a clock, an example of a flat angle we would see it at half past twelve if the hand pointing to twelve were still on twelve.

That angle of more than 180° and less than 360° . If we have a round cake in parts from the center, a concave angle would be the one that would form what is left of the cake as long as we ate less than half of it.

This angle is specifically 360°, with the object that performs it remaining in its original position. If we make a complete turn, returning to the same position as at the beginning, or if we go around the world ending up in exactly the same place as we started, we will have made a 360° turn.

It would correspond to a 0° angle.

Relationships between these mathematical elements

In addition to the types of angles, it should be noted that depending on the point at which the relationship between the lines is observed, we will be looking at one angle or another. For example, in the example of the cake, we can take into account the missing or the remaining portion of it. Angles can be related to each other in different ways , some examples of which are shown below.

Two angles are complementary if their angles add up to 90°.

Two angles are supplementary when the result of their addition generates a 180° angle .

Two angles are consecutive when they have one side and one vertex in common.

This is understood as those consecutive angles whose sum allows to form a flat angle . For example, a 60° angle and a 120° angle are adjacent.

Angles having the same degrees but of opposite valence would be opposite. One is the positive angle and the other is the same but with a negative value.

Opposite angles by the vertex

These would be two angles that start from the same vertex by extending the half-straights that form the sides beyond their point of union . The image is equivalent to what you would see in a mirror if you placed the reflecting surface together at the vertex and then placed it on a plane.