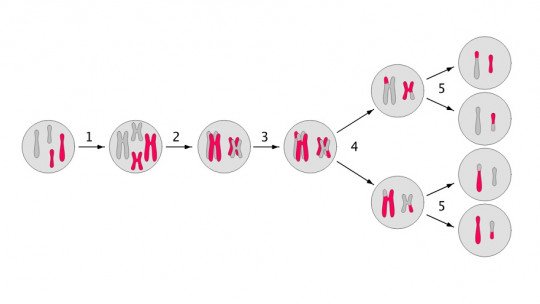 Something wonderful about life is how a single cell can give rise to a whole organism . I am talking about the birth of a new living being through sexual reproduction. This is made possible by the union of two specialized cells, called gametes (e.g. egg), in fertilization. The surprising thing is that it allows the transmission of information from both parents, so the new cell has a different genetic material. To achieve this it is necessary a different system of proliferation to mitosis, which remember that their result were identical cells. For this case, the method used is meiosis.

In this article we’ll see what the phases of meiosis are and what this process involves.

In the case of humans, the cells are diploid, which means that they each have two copies per different chromosome. It’s easy; humans have 23 different chromosomes, but being diploid, we actually have 46 (one extra copy per chromosome). During the phases of meiosis what is achieved are haploid cells , that is, they only have one chromosome per type (23 in total).

As in mitosis, the interface is present to prepare the cell for imminent cell division , increasing its size, replicating the genetic content and making the necessary tools. This is the only similarity between the two processes, as everything changes from here on.

Meiosis has the same four phases as mitosis: prophase, metaphase, anaphase and telophase; but they do not follow each other in the same way. Furthermore, meiosis performs two consecutive cell divisions, which explains why its result is four haploid cells . For this reason, we speak of meiosis I and meiosis II, depending on which division we are talking about; and in reality there are 8 phases of meiosis, 4 for each division.

Before continuing, two key concepts must be understood. The first is that of homologous chromosomes , and refers to the pair of chromosomes per gap. The second is sister chromatids, which is the result of the duplication that has been made of a chromosome during the interface.

During prophase I, the homologous chromosomes are very close together, allowing them to “exchange” parts with each other, as if they were changing chromosomes. This mechanism serves to generate more genetic diversity in the offspring . Meanwhile, the nucleus is degraded and the transport path of the chromosomes is generated: the mitotic spindle.

Metaphase I occurs when chromosomes are attached to the mitotic spindle. It then enters into anaphase I which is when they are transported to the opposite pole. But on this occasion, what separates are the homologous chromosomes and not the sister chromatids, which occurs in mitosis. Once separated, a rapid telophase I begins, where only cytokinesis occurs, that is, separation into two cells. Without time, these new cells enter a second cell division.

At this point in the phases of meiosis we have two diploid cells, but the chromosome pairs are the replicas (except for the parts exchanged during prophase I) and not the original pair, since what has been separated are the homologous chromosomes.

Since it is a new cell division, the cycle is the same with some difference, and this phase is more like what happens in a mitosis. During prophase II the mitotic spindle is formed again so that in metaphase II it joins the chromosomes at their centre and, now, during anaphase II it separates the sister chromatids towards opposite poles. During telophase II, the nucleus is formed to contain the genetic content and the two cells are separated.

The end result is four haploid cells, as each has only one copy per chromosome. In the case of humans, this mechanism generates the sperm or the egg , depending on the gender, and these cells contain 23 chromosomes, unlike the 46 chromosomes in the rest of the cells (23×2).

The objective that has been achieved throughout the phases of meiosis is that of generating haploid cells, called gametes, which can give rise to a new organism . This is the basis of sexual reproduction, the ability of two individuals of the same species to have offspring by matching their genetic content.

For this reason it is logical that these cells are haploid, so that at the moment of fertilization, which is the union of the two types of gametes (in the human case of sperm and egg), a new diploid cell is generated whose genetic material is formed by the pairing of the chromosomes from each gamete.