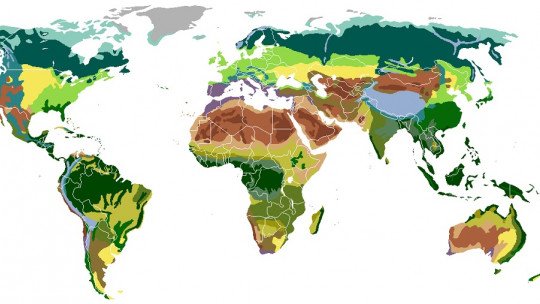 How important the environment is! If you don’t take care of it, you will end up losing the different natural areas that exist throughout the world , such as forests, jungles or seas. Each environment has some characteristic animals (fauna) and plants (flora), which are related to each other and to the climatic conditions (mainly temperature and rainfall), forming a small system, which is known as an ecosystem.

The truth is that there are large areas in the world where a specific climate predominates and they are inhabited by similar fauna and flora that form small communities, that is, these territories are composed of different similar ecosystems. The whole is what are called biomes. We will talk about the latter in this article: the types of biomes .

Defining the different types of biomes is not easy. There are many criteria for their classification and throughout history different methods have appeared, such as the Holdridge, Whittaker or the one proposed by the World Wildlife Fund (WWF). Although in this article I will talk about the main biomes as they have been traditionally taught, it is good to take this into account.

Located mainly in the northern hemisphere, in the strip of the Arctic Circle , this terrestrial biome is characterized by a climate of low temperatures and precipitations, with short periods of favorable time.

The soil is in constant permafrost , that is, freezing and thawing continuously, which causes it to be poor in nutrients and the flora that inhabits this biome is basically composed of plants of limited growth, such as grasses, mosses and lichens. As far as the fauna, it emphasizes the presence of great size mammals and migratory species.

This biome is normally located in the northern hemisphere, in the northern strip. The climate that predominates consists of very cold winters and short summers, with rather scarce precipitations . On this occasion, the soil only freezes in winter, so it is not so poor in nutrients.

The outstanding flora is based on coniferous tree forests (e.g. spruce). As for fauna, it consists of migratory species and animals that winter in the cold seasons, such as the bear.

This type of biome is located in certain areas of the USA, Europe, China and South America. The favorable period of time is longer than the previous ones, although the winter continues being freezing. The peculiarity of these forests is the rich soil of organic matter that comes from the decomposition of the fallen leaves in autumn-winter.

The flora that composes these forests is based on deciduous trees, that is, in winter they lose their leaves. The fauna is very varied, and there are still migratory species and wintering animals.

The same biome receives different names depending on the continent where it is found: steppes in Eurasia, prairies in North America and pampas in South America. This natural environment is characterized by cold winters and hot summers, with periods of drought.

The flora that is adapted to this very seasonal biome, that is to say, winter rest, very active spring and hydric deficit in the middle of the summer. Therefore, is dominated by grasses and perennial herbs (they do not lose their leaves). The fauna that inhabits it is either adapted to fluctuating resources or is migratory.

Mainly located around the Mediterranean Sea, this type of biome is also observed in California, Chile, Cape Town (South Africa) and southwest Australia. The typical climate of these areas is moderate winters and warm summers, with precipitation in winter and spring, but with periods of summer drought.

The forests are made up of a single type of drought-resistant evergreen tree , such as holm oaks, cork oaks or oaks, along with a shrub and understory (living under the shade of the trees). The fauna observed is mainly forest species but not migratory, although some are wintering.

Distributed in South America (Amazon), Africa (Congo) and Indonesia. It stands out for the absence of seasons, having a constant and high temperature throughout the year and abundant rainfall.

It is the biome with the greatest biodiversity and complexity in the world, where more than 50% of the species reside. The flora is dominated by giant trees (more than 70m high), followed by all types of plants, including vines and palms. In the fauna there is an abundance of insects, arachnids, amphibians, reptiles and birds . Among the mammals are common those of arboreal life, or the large ones that carry out their life on the ground.

This type of biome is distributed throughout the world, being found in North America, South America, Africa, Asia and Australia. It is characterized by the lack of precipitation and high erosion that the soil suffers from the wind, which makes life difficult. There can be both hot deserts (Sahara) and cold ones (Gobi).

Both the flora and the fauna that inhabit these biomes are adapted to these extreme conditions . Although scattered, the flora exists. Drought-resistant plants such as xerophytes (Cactus) predominate. As for the fauna, small animals are common that have developed mechanisms to avoid moisture loss, such as the strategy of hiding underground during the day.

Finally, we should mention aquatic biomes in general. In fact, it is the one with the greatest presence in the world, since includes all the oceans . This type of biome is divided into marine biomes (seas) and freshwater biomes (rivers).