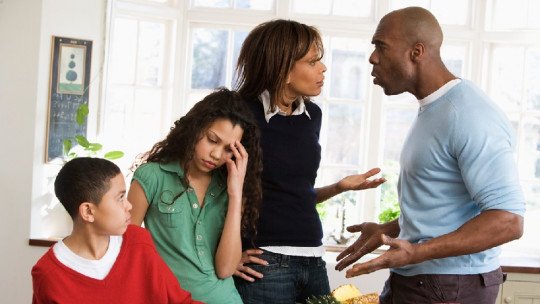 The term family comprises a group of persons united by filial relationships, that is to say, parents, children and siblings or by couple ties . This system is understood as an open totality, in which all the components are closely related.

Because of this close and intimate relationship, the behavior of any one of them can affect the dynamics of the family. Naturally, family disputes and conflicts are part of these dynamics . However, there are different types of family conflicts; according to the type of bond between people or according to the cause that originates them.

Conflicts or disputes constitute an inseparable element of living in society , given that it is composed of many different individuals with diverse opinions and ways of thinking. Moreover, a well-managed conflict is established as a means for development and progress, so it is necessary to face it in order to learn from it.

Obviously, family conflict is something natural, since in the coexistence of the members of a family unit, with different ages, thoughts and ways of seeing life, conflict is something inevitable. However, the main thing is not to avoid conflict at all costs, since that is impossible, but to avoid the escalation of aggression and to handle it intelligently and assertively.

Whenever a conflict appears in a family or family unit, instability also appears, which can lead to excessive frustration and worry in some members. In addition, old problems that were not solved may begin to resurface and only contribute to making the ball of conflict bigger.

Any kind of family crisis requires the cooperation of all the members , as well as a transformation and adaptation to a new situation; since during a family dispute the rules imposed in the family context become uncertain and it is necessary to work on them again.

There are several ways to categorize the different types of family conflicts. This categorization can be based on the type of relationship that exists between the agents involved in the dispute or based on the focus or cause of the conflict.

1. Types of family conflicts according to the type of relationship

Depending on the type of relationship or kinship that exists between family members, four types of family conflict can be distinguished.

Disputes or crises cannot be avoided in the context of a couple; however, if people are able to manage them properly, these conflicts can serve to strengthen the bond between the couple .

Usually these difficulties arise naturally as a result of communication problems or misunderstandings. The most common causes of everyday conflicts in a couple are

Depending on the stage of development of each of the parties involved in the conflict, they can be subdivided into three categories:

These types of conflicts are among the most common and those that last the longest, regardless of the stage of life in which each one of them is found. These altercations usually last for a very short time and most of the time it is not obligatory for the parents to intervene.

The positive side of these types of conflicts is that they constitute a prelude to the conflicts that can appear in adulthood, and therefore serve as an initiation and learning experience for adult life .

1.4. Conflicts with the elderly

When an adult enters the stage of old age, the changes he or she experiences are extremely important. Both on a biological level, when the person notices his/her own physical deterioration; and on a social level, in which events such as retirement, the loss of friends or loved ones appear , etc.

This set of changes can be experienced in a very dramatic way by the person, giving rise to conflicts with the rest of the components of the family nucleus.

2. Depending on the focus of the problem

These conflicts are categorized according to the source or focus of the problem, and although they are described separately, more than one type can occur at the same time.

Each change or jump from one stage of the life cycle to another is usually accompanied by some conflict, this is due to a series of factors such as new responsibilities , assimilation of new roles or events such as marriages, retirements or deaths.

If these conflicts try to be neutralized or are managed in an unwise way, they can turn into real family crises.

The origin of these crises lies in** the sudden appearance of an unexpected event**. These events range from the loss of a job, some kind of accident, the death of a loved one, etc.

What usually characterizes these crises is the search for blame by the person most affected , instead of trying to get used to the new circumstances.

In this kind of difficulty, old crises or events are repeated and renewed, causing conflicts to reappear among family members.

These crises are typical of family units in which dependent or helpless people reside. In these cases, conflicts appear when the persons in charge of their care see their habitual activities or their freedoms limited or restricted .

It is necessary to understand that in a situation of family conflict not everything is negative. A conflict can be a perfect opportunity to learn new ways to solve problems. First of all, the concrete causes of the conflict must be identified so that possible changes can be worked on.

Some tactics or strategies to effectively manage disputes are

2. Watch the way you speak

A good way to express feelings in an appropriate way is to replace reproaches with manifestations of what the person is feeling or what he or she feels hurt. It is also necessary to pose or suggest alternative solutions to the problems that have caused the crisis .

3. Allowing the intervention of all those involved

It is very common that in any kind of dispute the people involved take each other’s word for it, or that they do not want some of the others involved to intervene in the solution of the problem.

However, this is a serious mistake. Since none of the parties involved should be given priority and all of them have the right and obligation to intervene at the same level.

Despite experiencing a conflict situation that can be stressful, it is important to continue expressing displays of affection and love; as these lower the levels of tension in relationships.

5. Finding the right place and time

Due to the emotional component of family conflicts, people often tend to argue at any time and in any place. However, it is better to postpone the discussion until the mood is calmer and the context accompanies and facilitates the dialogue.