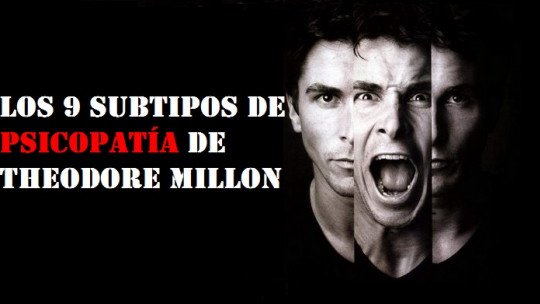 Theodore Millon, a prestigious Florida school psychologist who did research on human personality. Among Millon’s many contributions, today we will focus on his study of psychopathy.

The 9 Subtypes of Psychopath

In 1998, Millon published a specific chapter in which described the subtypes of psychopathy (“Subtypes of psychopathy”, in “Psychopathy”, edited by Millon, Th. and others, Guilford Press) composed of 9 subtypes: the unprincipled overlapping , the risk-taker , the greedy , the weak , the explosive , the harsh , the malevolent and the tyrannical . Million points out that none of these categories are mutually exclusive, since you can have a profile composed of several subtypes.

Below we will describe in detail the different subtypes, as well as the most important features that allow them to be distinguished.

It is usually associated with subjects with narcissistic personality traits. They tend to successfully stay outside the boundaries of the legal, showing self-centered and disloyal feelings, indifferent to the welfare of others and with fraudulent social styles, usually exploiting others.

They are not usually able to link themselves to a treatment and are very good at creating imaginative and expansive lies to achieve their goals . They are totally lacking in feelings of guilt and social awareness, feel superior to the rest and also enjoy the process of deceiving others. The relationship with this type of psychopath will last as long as he considers he has something to gain from the person, after which time he will simply end it. They usually show a cold image, with reckless, vengeful and cruel attitudes.

It would be characterized mainly by falsehood. His behaviour is apparently friendly and sociable, but inside he hides a great impulsiveness, resentment and lack of confidence in others . He may have a broad social life, where he presents a persistent search for attention abnormally through seduction, but his relationships are mostly superficial and fluctuating.

They will usually exhibit short-lived enthusiasm, so they will be irresponsible and impulsive, constantly looking for new sensations. They tend to be insincere and calculating, they will not admit weaknesses to others, they will always exhibit a facet of false success; it always seems that everything is going well for them, they show themselves as winners. Although this subtype of psychopaths sometimes tries to convince themselves that their intentions are good, they only try to obtain from others what is convenient for them through manipulations, they don’t look for the good of others.

Most serial killers and/or common killers fit this profile. They are very hostile and vindictive and their impulses are discharged with an evil and destructive purpose . They enjoy a cold cruelty and constant desire for revenge for betrayals and punishments allegedly suffered or to be suffered.

The psychopathic characteristics are very similar to those of sadists as they reflect deep depravity, desire for compensatory retribution and hostility, as discussed in the article on “sadistic serial killers”. They could be described as spiteful, vicious, malignant and biting. Legal sanctions would further increase their desire for retribution and revenge. Although they rationally understand guilt, remorse, ethical concepts, morality… they do not experience it within themselves. They do not lose their self-consciousness of their actions and do not end until their goals of destructiveness and retribution are over.

Together with the Malevolent, this subtype is one of the most cruel and dangerous . Both are intimidating, overwhelming and destructive. Unlike the previous one, this one seems to be stimulated by resistance or weakness, which increase the attack instead of softening or stopping it. It takes special pleasure in forcing the victim to cower.

Involved in risky situations to feel alive, are impulsive and thoughtless people . They are individuals who are reckless and insensitive in situations that any normal person would feel afraid of. They are capable of imposing self-discipline and routine life habits, they will always want change. This subtype would be a mixture of antisocial and histrionic type based personality. They are not concerned with the consequences of their actions on others, only their need for stimulation prevails.

Their great motivation in life is to get big, to have rewards. They feel that “life has not given them what they deserve”, so through criminal acts would compensate for the emptiness of their lives and make up for the “injustice” they have lived through . They rationalize their acts through the idea that they restore an altered balance. It satisfies them to be above others and to harm them in life (in whatever sphere), feeling that they are their pawns.

They also have little or no feelings of guilt about what they do to others, never considering it enough. In addition, they are tremendously envious, greedy, aggressive, jealous… they feel good about other people’s pain and are angry at other people’s successes. Successful businessmen could fit this profile, considering objects to others to satisfy their desires. The worst thing is that they never achieve a state of complete satisfaction, they always crave more.

This subtype would have a behavioral basis of the avoidant and dependent type . It shows others an image of false security and self-confidence that in reality hides the opposite. His aggressions are usually to show his lack of fear and to adopt the role of aggressor and never of victim. They are often caricatures of petty tyrants, maintaining an intimidating attitude, showing the world that “it is dangerous to mess with them”.

In this case there would be many components of intermittent explosive disorder (pulse control t., code F63.8 according to DSM-IV-TR). Its main characteristic is the sudden and sudden outburst of extreme hostility . Its behaviour “explodes”, so that there is no time for containment. These attacks of anger are characterized by uncontrollable rage towards others, which often provokes submission and passivity in the victim.

This subtype shows your rejection of others in a passive and indirect way . They tend to have incessant disagreements with others, magnifying even the smallest action in order to be entangled in bitter and constant disputes with the people around them.

They have few regrets or feelings of guilt about the discomfort they cause in others. They tend to be bitter and ironic, sharing personality traits with negativistic and paranoid personality disorders. They always believe they are right about everything and others are always wrong and find it especially pleasurable to contradict others. They find less satisfaction in the logic and legitimacy of their arguments than in their use of them to frustrate and humiliate the other person.

By way of closing…

Theodore Millon found several subtypes of psychopathy, which we can find in different scenarios: murder, big business, robbery, politics… or even in more everyday life situations.

In his study, he found that the most common profiles are the “unprincipled psychopath”, the “risk-taking psychopath” and the “malignant psychopath”, although they are not exclusive to each other, one can have a profile characterized by various subtypes. It also found that there is a comorbidity with sexual inclination disorders (paraphilias) and impulse control disorders.