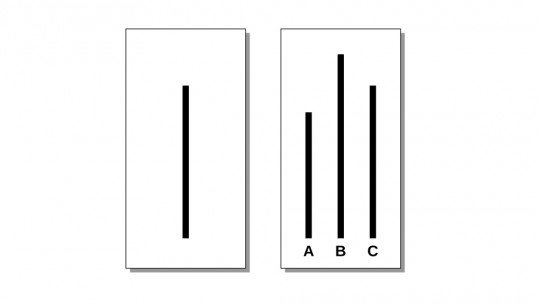 How many times have we heard that someone has no personality because they end up doing exactly the same thing as their group of friends. Psychology, a staunch enemy of simple and lazy explanations, has examined over the past century what the influence of the group is on the individual.

The most popular and influential studies in this regard are probably those conducted during Solomon Asch’s research .

This social psychologist studied the phenomenon of conformity, which is the tendency of the individual to modify his response to an object by bringing it closer to that expressed by a majority of individuals within a group , through an experimental situation. Do you think you could have resisted group pressure in that same situation?

Asch is not the first to investigate social compliance within a group . There were others like Sheriff who twenty years earlier studied it using ambiguous stimuli. He formed groups of three people in a dark room with a single point of light projected on a wall. This point seems to move due to the movements of the body, but having no reference points creates the illusion that the point moves by itself. These three participants must give an estimate of how much the point moves.

Two of the participants are placed because they give similar estimates alone, while the third estimates differently. The result is that the latter brings his estimates closer to those of his other two colleagues, since the stimulus is ambiguous. Thus, when faced with uncertainty, the individual tends to use the opinion of the majority . In this sense, Asch takes this study as a starting point and goes further using an unambiguous stimulus.

Another precursor to the Asch experiments is Leon Festinger’s theory. According to Festinger, judgments must have a basis on which they are valid. When it comes to judgments about physical reality, a valid answer can only be given by examining the object. This means that the individual does not need to know the response of others to know if his own response is valid, unless it is a social judgment.

Asch, who thinks that the phenomenon of conformity also occurs in the face of objective physical stimuli, and that Sheriff does not address these stimuli because that of his experiments is ambiguous , designs his own research along these lines.

In the original experiment, Asch forms a group composed of a student and several collaborators of the researcher who pose as subjects. The task consists of the researcher presenting a sheet on which three horizontal bars of different sizes are printed, and each subject must say aloud which of them is the tallest. The collaborators are prepared to respond correctly in the first trials, but as the situation progresses they begin to make mistakes and indicate a bar that is clearly not the tallest.

The subject who does not know what is happening begins by answering correctly, just as he thinks, but as others insist on pointing out the wrong bar, his answers begin to be the same as those of others. Thus, it is concluded that the phenomenon of conformity is indeed observable in situations where the stimulus on which a judgment must be made is objective.

When interviewing the subjects who had gone through the experiment, they explained that despite knowing for sure what the correct answer was, they conformed to the expectations of others for fear of being ridiculed in some way. Some of them even claimed to think that the answers were really correct .

Not satisfied with this result, Asch carried out similar experiments with small modifications to see how it was possible to break with conformity in the answers. Under the same paradigm, he introduced a series of variations that showed very interesting results.

In one of the conditions, he introduced an “ally” into the group. Apart from the subject who does not know anything, another subject or researcher is introduced who must give the correct answers independently of the others. It is observed that when the subject sees that he is not the only one who thinks differently from the rest, the conformity decreases drastically . In some way, the presence of another minority opinion validates one’s own.

However, when this ally withdraws in the middle of the experiment, the subject again suffers the effects of conformity. Although during the first half of the experiment he managed to resist social pressure, when he lost his source of validation he again took the majority opinion as a guide.

He also noted that the larger the number of people in the group, the more powerful the compliance. In small groups, minority opinion does not suffer as much pressure to change as when three or four more people are added. Other factors such as writing down the response rather than saying it out loud and exposing oneself to criticism or ridicule, explicit or otherwise, encourage resistance to compliance.

Why does compliance occur?

The first explanations considered that social influence was produced through imitation of the behavior of others, which in turn was based on processes of suggestion and contagion that occur in group contexts. This type of context is considered to facilitate the contagion and dissemination of ideas , and imitation allows the individual to become social.

However, from Asch’s experiments, the conformity becomes explained by the asymmetry between the target and the source of influence. The subject or target recognizes the power of a source (a majority, for example) and depends on it to obtain the correct information in ambiguous situations and to know which rules he must follow to maintain a positive relationship with others.

Thus, while in the Sheriff’s experiments informational dependence is more prevalent because the stimuli are ambiguous, in the Asch experiments the influence is more of a normative nature. Although the subject knows the correct information with certainty, he obtains information from the rest of the group about which answer is approved by the group and acts accordingly.