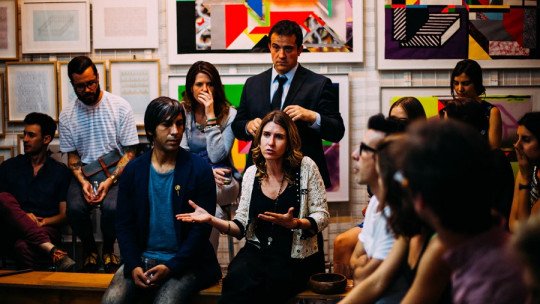 Assertiveness is the ability, which we can all develop, to express an opinion, desire or need without attacking the other.

When we relate to others, there are many situations in which we have to say no, set limits or show disagreement. This requires the recognition of our emotions and their correct expression, without violating others. In this article we want to talk about the tools that help develop a more assertive communication.

In Avance Psychologues we have observed that most of the time we hesitate more, when it comes to saying no to others, in situations where we have to respond to someone aggressive, and when it comes to asking for favors, hence we want to focus on these aspects and develop them, but not without first understanding why it is difficult for us to be assertive and try to find out how assertive are you?

The difficulties of being assertive

Sometimes you get the impression that saying “no” to someone can lead to conflict or rejection of your interlocutor, and this is not necessarily the case. On other occasions, mistrust reigns, and we think that we must defend ourselves from others and “put them in their place” almost constantly. This attitude generates many misunderstandings and that people around us shun us for fear of feeling attacked or offended by us, which leads to a tense and stressful coexistence.

In Avance Psychologists we put special emphasis during the therapies on this aspect, and we take care to give priority to developing this tool, since we are aware that a good control of assertiveness is vital to reduce anxiety and improve self-esteem. The feeling of happiness and well-being increases significantly when our relationship with others stops being conflictive .

Communication between people can be seen as a continuum in which assertiveness is at the centre and in balance. At both extremes are found the modes of communication that we should avoid: submissive communication and aggressive communication . Before reaching these extremes there are degrees and nuances, but we are going to develop these concepts that can clarify on which side of this continuum we are. 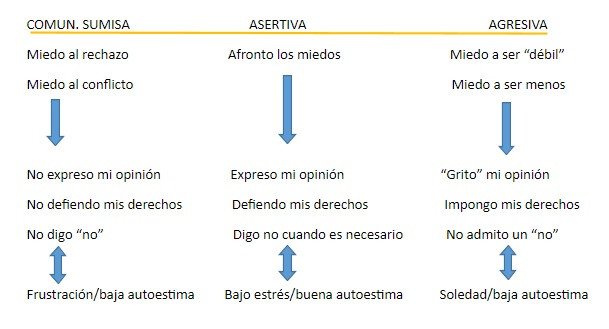 When we engage in passive or submissive communication, we have real difficulties in expressing our opinion or defending our rights. Saying “no” becomes a real trauma and we have a hard time asking for favors. The fear of rejection and conflict greatly influences whether we stay on this side of the continuum. These fears are often determined by early experiences where we have been punished or rejected for expressing ourselves. Sometimes dominant parents or experiences of rejection at school are behind the submissive communication.

At the opposite extreme, aggressive communication is based on the belief that we must put others in their place , that we must be suspicious on most occasions and that we must impose ourselves in order to be strong, the opposite would mean weakness. This belief system, also normally constructed in the early stages, leads to the use of elevated and defensive tones of voice, disqualifications during conversation and impositions.

At the heart of the continuum is assertive communication, which is characterized by trying to express ourselves in different situations in a clear and non-aggressive way, trying to take others into account without forgetting ourselves. This is the most appropriate communication to understand ourselves with others, avoiding conflict, but facing our fears to express our opinions and express our rights. Achieving assertiveness is the starting point for developing good self-esteem .

Many people are not at extremes, in fact, most of us perform in intermediate degrees without reaching them, but still each of us has a certain tendency towards one or the other side. Furthermore, not in all areas of our lives do we move on one side of the continuum, we can be very assertive at work, but submissive with our partner and friends, or the other way around .

Normally, the closer we get to the end of the continuum in one area of our life, the more we need to compensate by jumping to the other. This explains these situations of “I put up with it, I endure it and in the end I explode with the least deserving and at the most unexpected moment”.

Hence the importance of getting closer to assertiveness in all of them, to improve our relationships and have a greater sense of control over our emotions. This has a great influence on self-esteem and the decrease of anxiety.

Tools to be more assertive

Next, we are going to deepen in the aspects in which it is more difficult to be assertive, giving concrete tools for assertiveness .

Saying “no” is probably one of the hardest answers we have to give to others. Many people accumulate large doses of stress from the inability to say no and from the need to please. But if we know how to do this and also understand that others will not stop “loving” us, nor will they get angry because we say no, it will be much easier for us to begin to manage this response in our communication with others.

The first thing is expressing the no, without too much hesitation . If you don’t do this you will end up being ambiguous and there you can generate mistrust.

Secondly, you give an explanation so that the other does not feel rejected .

And thirdly and finally you give an alternative only in case you consider the other person deserves it , you want to and you can. This point is important so as not to establish relationships in which there is an imbalance between the giver and the receiver, since over time they generate stress and resentment.

“I won’t be able to help you, I’m busy that weekend. If you want we can leave it for the next one” (when we consider that the other person deserves an alternative, as long as we want and can).

“I’m not going to be able to help you, I have my hands full that weekend” (when we consider that we don’t want to give the other one an alternative, either because we can’t or because he doesn’t deserve it).

How to Stay Assertive in the Face of Aggression

Being assertive with someone aggressive is especially useful, but also more complicated, since the response of the other is less predictable . Even so, it is worth knowing how to be assertive on these occasions and having the peace of mind that your intention has been, at all times, to move from respect, regardless of how the other person chooses to react.

Here are some of the tools we can use when the other is more upset or aggressive:

Extinguishing the other’s response refers to responding without reinforcing him/her, changing the subject or leaving the conversation, trying to use a friendly tone so that the other doesn’t feel ignored.

Two examples of this would be: “I understand…, well… I’ll leave you because I have a lot to do now”, “it’s obvious that we don’t think the same way and we don’t have to convince the other one either, what do you think if we don’t give it more importance and leave this conversation for when we are more relaxed”

The aggressive person has a special tendency to generate insecurity in the other person through accusation or emotional blackmail , but most of the time he does it with vagueness and without concreteness. That is why it is important to ask him to make us concrete, so that we have the opportunity to defend ourselves more fairly. Example: “I don’t understand what you mean by not doing my work, can you tell me exactly what work you are referring to, about which specific aspect of the project carried out so far, are you unhappy?

With this tool, we try to lower the tension by putting ourselves in the other’s place and recognizing their part of reason, but defending our point of view. Example: “I know that you tell me this with your best intention, and I recognize that sometimes it is difficult for me to work as fast as you do, but I think that at my pace I do it well and that I try to do a good job”

Sometimes it can be convenient to make the other person see that they are getting too upset or that they are disrespecting us. Examples: “I think you are not aware of the tone you are using to talk to me”, “please don’t shout, you can tell me the same thing, but in a different tone”.

How to make requests?

In these cases it is a matter of expressing what we need , being aware that we have the right to ask and the other to say no, but we must take the risk of a “no”, and understand that this does not mean that the other is rejecting us. Examples: “I’m going to need your help, you’ll give me a hand when you can”, “I love your dress, will you lend it to me some day”.

We can always express our need without the other person feeling obliged, showing him/her our empathy without ignoring our need. An example of this would be: “I know you are very busy, but could you give me a hand when you are done, I understand that this is not the time, but for me it is important that we talk about this when you have rested”

Getting angry with assertiveness

Anger is a common and even necessary emotion a, as it provides us with the need to withdraw from our surroundings at certain times, or to set limits on others when necessary. Many people are afraid of getting angry and contain it because they fear the rejection of the other or because they believe that getting angry is to become aggressive. Not at all, we can get angry, and very forcefully, without the other feeling attacked.

This tool consists of expressing feelings, making the other person see that we put ourselves in their place, thus reducing the tension , but making our need very clear.

Examples: “the truth is that I am very hurt by the tone with which you have spoken to me, I understand that we are both very nervous, but I do not want you to speak to me again in that tone”, “I am very angry at the moment, you did not warn me that you were not going to come and I have been waiting for you for more than an hour; I can understand that you were very busy and you forgot to warn me, but now I do not want to continue talking, I need to be alone”.

With this way of communicating our displeasure, the other can understand what is happening to us and also will be aware of what we need on future occasions .

Getting angry assertively is not about shouting or making bad faces to generate effect, on the contrary, the challenge is to control the tone and, from the calm, express our emotions.