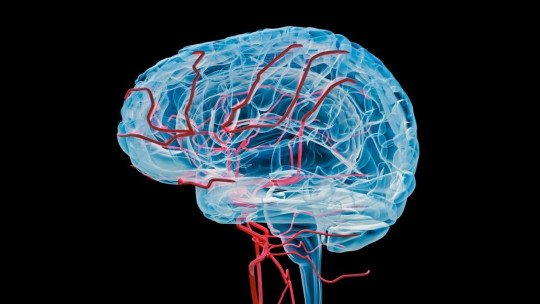 Our brain is a complex machine that needs to be irrigated, in order to function properly, with a red fuel that we all know: blood. And to do this, it uses a set of strategically placed arteries that will be in charge of keeping the brain and the rest of the organs well fed.

In this article we will see how blood circulation occurs in the brain and what are the main artery systems that make it possible.

How does blood circulate in the brain?

The human brain is a complex organ and is responsible for a multitude of body functions that we need to survive. All machinery needs fuel to function, and our brain would be no different. Although it accounts for just over 2% of body weight, it consumes one-sixth of the cardiac output and 20% of the oxygen our body needs at rest.

The brain is constantly active (even when we sleep), which is why vascularization or blood supply is such an important process for an organ like this. The entire brain is irrigated by four large arteries, which emerge from the aortic artery and ascend through the neck to penetrate the skull.

Blood circulation in the brain occurs through two symmetrical systems on both sides of the neck: on the front side, the common carotid arteries; and on the back side, the vertebral arteries, which make much of their way within the cervical vertebrae.

The common carotid arteries are divided into two branches, the external carotid, which nourishes mainly extracranial structures (tongue, pharynx, face, cervical muscles, etc.) and the internal carotid, which penetrates the skull and provides blood to most of the anterior portion of the brain, which we call the brain.

The vertebral arteries penetrate the skull and unite to form a common trunk that we know as the basilar artery , which is responsible for irrigating the cerebellum and brain stem. The internal carotid arteries and the basilar artery are in turn divided into smaller and smaller branches, and are distributed over the entire surface of the brain. 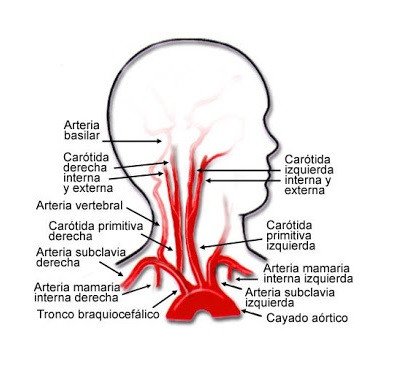 The carotid system is responsible for the anterior circulation of blood in the brain and provides almost 80% of the blood flow to the brain.

It is formed by the common carotids (right and left) which, once they have penetrated the skull, form the internal carotids, branching into the anterior and middle cerebral arteries. These reach the cerebral cortex, reaching the frontal, parietal and temporal lobes.

This artery has cortical (orbital), frontal (parietal) and central branches (including the internal artery of the striated body), as well as the anterior communicating artery of the brain, and can be classified into 5 segments. It irrigates a large part of the inner side of the brain hemisphere.

This artery has the most complex branching pattern of all the cerebral arteries , and has cortical (orbital, frontal, parietal and temporal) and central (striated) branches. There are two main branches: a basilar branch, which irrigates part of the caudate nucleus and thalamus; and the cortical branch, which irrigates a large part of the cerebral cortex.

When the middle cerebral artery is blocked, hemiparesis (paralysis of one side of the body) occurs, affecting parts of the body such as the face, arm or leg, and generating sensory and visual alterations.

This system facilitates the irrigation of part of the spinal cord, the brain stem, the cerebellum and a large part of the occipital and temporal lobes of the brain. When blood flow is reduced or stopped completely due to a stroke or a tear, the consequences for the individual are often disastrous, given the importance of the brain structures involved in the subsequent irrigation.

The posterior cerebral arteries originate in the interpeduncular cistern and come from the bifurcation of the basilar artery . Among its main branches are the posterior communicating artery, the posterior choroidal medial and lateral arteries, as well as the calcarine artery.

The cerebral arterial circle or Willis polygon (named after English physician Thomas Willis, a pioneer in the study of comparative anatomy), is a heptagon-shaped structure located in the lower part of the brain, surrounding the stem of the pituitary gland, the optic chiasm and the hypothalamus.

This system of blood circulation is formed by the union of the two systems we have seen before: the carotid system and the vertebrobasilar system . It is what is called an anastomosis system, that is, a network of interconnected arteries in the form of an arterial polygon in charge of supplying blood to the brain and adjacent areas.

Like the rest of the systems, the Willis polygon can be divided into its front and back part. The anterior part is formed by the internal carotid artery and supplies blood to the anterior part of the brain, irrigating most of the cerebral hemispheres, as well as some deep areas such as the caudate nucleus and putamen. The posterior area of the arterial polygon is made up of the vertebral arteries and is mainly responsible for supplying blood to the cerebellum, the trunk and the posterior area of the cerebral hemispheres.

The main function of the Willis site is to allow an alternative route in case an occlusion occurs or the blood supply stops on its usual route. In addition, it also allows the flow of blood between the two sides of the brain (right and left hemisphere) to be equalized.

In short, this network of arteries facilitates a correct distribution of blood flow in our brain , especially in the event that we suffer any type of damage or stroke that involves a decrease or paralysis of cerebral irrigation and vascularization.