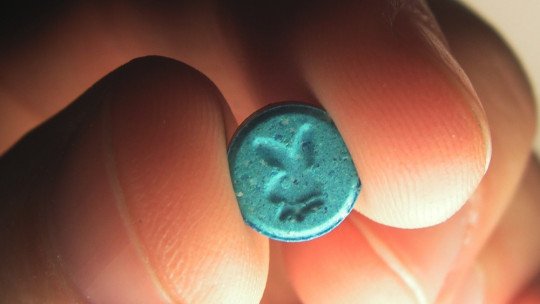 Concerts, discos, parties… In all these situations most people move for hours spending large amounts of energy until in some cases reaching exhaustion. However, some people use different drugs and substances in order to endure the energy expenditure for hours and at the same time provoke feelings of euphoria and companionship.

One of the most widely used substances in this regard is ecstasy or MDMA. However, this hallucinogenic substance is not harmless, but it alters our organism to a great extent and sometimes in a way that is dangerous for our health and our own lives. In this article we present some of the effects of ecstasy in both the short and long term .

Ecstasy or MDMA is a psychoactive (or disturbing) psychodisleptic substance , a type of substance that generates modifications in the brain’s activity and provokes perceptual and mood alterations. Due to its chemical composition, it forms part of the phenylalkylamine group, together with mescaline and other drugs.

This substance (3,4-methylenedioxymethamphetamine) generates an expansive and euphoric mood , increased self-confidence and ego, hyperactivation, hallucinations, altered perception of time and feelings of peace and trust with others. The heart and breathing are accelerated, and the sensation of hunger, thirst and physical tiredness is reduced. However, at the same time it generates a state of tranquility and relaxation.

Ecstasy is one of the most widespread types of hallucinogenic , being together with marijuana and cocaine one of the most widely used illegal drugs. It is generally used recreationally, although it has sometimes been used in various investigations and was even explored for therapeutic use in the 1960s.

However, nowadays ecstasy is not considered as an element with proven therapeutic properties, so it is only used as a recreational drug especially at parties and discos .

The main mechanism of action of this substance is based on the acceleration and increase of the synthesis of monoamines , affecting dopamine and serotonin.

This increase in the synthesis and transmission of these neurotransmitters explains the activating effects of ecstasy, as well as the feeling of peace, tranquillity, empathy and social rapprochement .

Furthermore, it has been observed that the continued use of this substance causes a degradation of serotonergic neurons , which explains the presence of different side effects in chronic users and intoxications.

The immediate effects of ecstasy are widely known and some have been mentioned before. MDMA generates an increase in nervous activity, causing excitement and euphoria. It also generates a feeling of closeness and confidence both with oneself and with others, tranquillity and calm.

In addition, another effect of ecstasy is that alters the perception of tiredness, hunger and thirst , which decrease to the point of noticing its presence.

Ecstasy causes an increase in heart rate and blood pressure, which leads to an increase in the level of energy we can spend and an increase in activity. However, this increase can lead to severe injury and bleeding of the muscles, kidneys and viscera, as well as causing injury to the heart in the event of an overdose . This factor is one of the most dangerous when taking MDMA.

Another short-term effect of ecstasy is a rise in body temperature, which is further aggravated by the increased physical energy and use of the substance (usually at parties and concerts where people jump and dance, which further raises the temperature). This hyperthermia can generate fever, convulsions and even death, being one of the most frequent causes of death due to this drug.

On the other hand, it can also induce visual hallucinations, confusion and an intense fear of those around them with paranoid characteristics, especially in what is called “bad trip” .

Finally, other typical short-term symptoms are bruxism and increased jaw tension, as well as hyperreflexia and muscle tension. Also amnesia and loss of consciousness may occur, in extreme cases reaching coma.

Beyond the immediate effects of ecstasy consumption, it is necessary to take into account that if the consumption of this substance is prolonged in time it can cause serious alterations in the body .

It has been observed through various studies that its prolonged consumption produces modifications and deterioration in the serotonergic neurons, specifically producing damage in their axons, some damage that can become permanent . These modifications can generate depressive and anxious symptoms.

The use of MDMA has also been linked to the loss of mental faculties such as memory and decision-making capacity, as well as to sleep disorders. It has also been shown that frequent use of this substance can cause chronic psychosis, as well as intermittent hallucinations, increased impulsiveness and aggressiveness, and anxious symptoms.

The use of ecstasy also causes damage to the blood-brain barrier and can lead to inflammation of brain tissue. It can also cause and/or facilitate the occurrence of severe and even fatal brain strokes or bleeding. Other organs damaged by the action of Ecstasy are the liver and the heart.