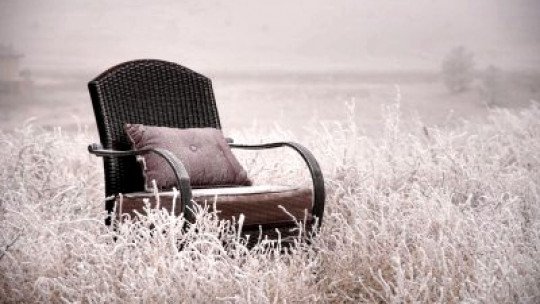 The Empty Chair technique is one of the most striking and, in some ways, spectacular tools of Gestalt therapy: people who sit down in front of an empty chair and address it as if there were sitting a being relevant to them ; a being that, in some way, has been involved in an event that changed their lives.

Of course, in reality there is nobody sitting there (there is a reason why it is called the Empty Chair technique). Imagination and suggestion are the elements that are interwoven in this therapeutic approach, not esotericism. But… what does it really consist of?

Sitting in the empty chair

“Ania lost her father at the age of nine in a car accident. That night her father was leaving work at high speed because the little girl was sick when a drunk driver hit the vehicle. Now sixteen years old, Ania still remembers the night of the accident as if it were yesterday. She feels a certain guilt because if it weren’t for her condition her father wouldn’t have run so much to get home, and she also feels an intense sense of anger towards the man who caused the accident”.

Stories like this happen relatively often in real life . Many of those who suffer a loss of this type suffer from severe emotional blockages or extreme emotional lability, sudden aggressive reactions or feelings of guilt that drag on for years unless treatment is sought. Even pathologies such as Post-Traumatic Stress Disorder (PTSD) can occur.

The Empty Chair technique is one of the possible techniques that are usually used to help overcome this type of experience based on past experiences.

What is the Empty Chair technique?

The technique of the Empty Chair is one of the best known techniques of Gestalt Therapy. It was created by the psychologist Fritz Perls with the purpose of elaborating a method that allows to reintegrate in the life of the patients phenomena or unresolved questions. The technique in question tries to reproduce an encounter with a situation or person in order to dialogue with it and make emotional contact with the event, being able to accept the situation and give it a conclusion.

The name of the Empty Chair technique comes from the use of a real chair, in which the patient imaginatively “sits” the person, situation or facet that causes the emotional block and then establishes the dialogue mentioned above.

The use of the Empty Chair

Its use is very frequent in cases similar to the one shown in the example, as a way of dealing with traumatic losses, or in the process of grieving. However, its application is not limited only to this area, but is also used as an element to allow the acceptance of facets of one’s personality or of one’s thought that are not considered acceptable by the patient, as well as to work on the perception of limitations and disabilities (loss of faculties, amputations, etc.).

It is also a valid technique for coping with traumatic situations, which may or may not occur with PTSD and/or dissociative disorders, such as rape, divorce or survivor syndrome. The characteristics of this technique also allow it to be applied in the world of education or even at the organizational level, in phenomena such as burnout or bullying.

In all cases, we act under the belief that “the patient only needs an experience, not an explanation” to close the unfinished process and accept his situation.

On a therapy level, in addition to being an element for the client to explore his own vision and contact with his emotions, is an element that provides a lot of information both to the individual himself and to the professional about the way in which the patient processes the situation and how this has affected his quality of life, favouring the application of other actions that improve the treatment of the problems analysed.

Operation of the technique

Let’s see below how the use of the Empty Chair works. First, in a preparatory phase, the patient is physically confronted with the empty chair. That is, the empty chair is positioned in front of the individual (although sometimes it is placed diagonally so that no opposition to the imagined person or situation is seen).

The patient is then instructed to project imaginatively onto the chair the person, situation or feeling or part of the personality with which the dialogue is to take place.

In a third phase, the patient is invited to describe the projection made, in order to strengthen the imaginary image that has been represented. Both positive and negative aspects of the person and the situation or its effects should be mentioned.

In the case of a death or separation, it is useful to recall the relationship that existed before the event and what happened before it , while in unacceptable feelings, traumas or facets of one’s self it is useful to look for the moment when it appeared or when it became a problem. It is likely that in this context the revelation of what was left pending or the sensations produced by the situations in question will arise, making conscious blocked elements.

Later, in the verbal expression phase, the patient starts the dialogue aloud with the projection, trying to be sincere and letting the patient see those details that he/she does not dare or has not been able to show in his/her daily life or before the person in question, how the patient has lived the situation and why it has been like that. The therapist must monitor the dialogue and redirect it so that no deviations occur that make the situation worse, without restricting the flow of thought of the individual.

Although in some variants of the technique it is not applied, it is useful to have the patient exchange his chair with the projection chair, putting himself in the other’s place in a way that facilitates emotional expression. This exchange will take place as many times as deemed necessary as long as the transition is necessary and consistent with the problem to be addressed.

Finally, the patient is pointed out and helped to reflect on the sensations he is showing , so that the subject is able to identify and realise his emotional reactions, how the event has affected him and how this affects his life.

To finish the technique, the therapist tells the patient to close his eyes and imagine the projection going back inside him, and then to remove all the images created while paying attention only to the real context in the practice.

Difficulties in using the Empty Chair

Although this technique has shown to be useful for emotional release, self-acceptance and resolution of grieving processes, its application may be hindered by a series of resistances .

To begin with, this type of technique requires the ability to imagine and project a person’s image, whether a being is not present or a part of the person himself. That is, someone who does not have the ability to accurately imagine the person or facet of personality in question will not be able to get the intended level of benefit from the technique. The patient can be guided in the technique through questions to facilitate the projection.

A second difficulty is that the patient himself refuses to use it because he considers it ridiculous, or because of fear or difficulty in expressing his thoughts aloud.

A third and final problem may come from the ability to detect the blocked element, so that the patient is not able to find another perspective on the situation experienced, which must be worked on. Sometimes, the element that produces discomfort is difficult to identify.

It is important to note that this technique should only be used under the supervision of a therapist who can manage the situation .

Also, although it has many possible uses, the Empty Chair is used intermittently, only when relevant to facilitate emotional contact with a part of the patient’s self or to explore the problem situation.