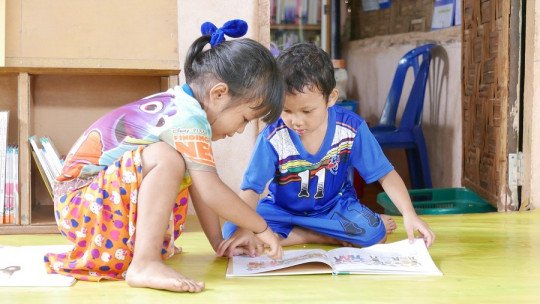 Language, both written and oral, is fundamental for understanding and developing in the social world, since it is what allows us to share our internal world and also to understand what others think and think.

Of course, presenting problems in this very human aspect is a serious matter, which requires proper professional intervention.

The Illinois Psycholinguistic Aptitude Test is a diagnostic test used in children to evaluate whether they have any kind of problem in the multiple components that make up the psycholinguistic functions, allowing for the initiation of an intervention focused on alleviating the deficits that may exist.

What is the Illinois Psycholinguistic Aptitude Test?

The Illinois Psycholinguistic Aptitude Test, whose authors are Samuel A. Kirk, James J. McCarthy and Winifred D. Kirk, is a diagnostic instrument whose main objective is to detect both specific strengths and difficulties that may be manifested by children between the ages of 3 and 10. Its application lasts about 60 minutes and only two notebooks with linguistic stimuli, a notebook, stopwatch and correction templates are needed.

This test serves as a tool to evaluate language problems and, in this way, to develop an educational intervention , measuring the psycholinguistic functions involved in the communicative capacity of children, which can serve as indicators of a possible developmental and learning disorder.

The validity of this questionnaire, which aims to evaluate the psycholinguistic processes in children in their childhood and pre-adolescence, is high, and has been carried out using the Pearson correlation test. Furthermore, it presents a high reliability.

What do you evaluate and how do you do it?

The Illinois Psycholinguistic Aptitude Test measures, as we mentioned in the previous section, several of the psycholinguistic functions of children. These abilities become very important when it comes to carrying out communication in a satisfactory way , both orally and in writing .

The questionnaire is made up of 11 subtests, which are grouped into two channels, the first 5 subtests here being grouped within the visomotor channel and the following 6 being in the auditory-vocal channel.

Subtest number 12 presented here corresponds to one that has been discarded in more recent editions of the questionnaire, however it is interesting to dedicate a brief mention to it.

The ability of the examinee to obtain the meaning of the symbols that are visually presented to him is observed.

The child is asked to show a certain object or person shown on a paper or sheet of the questionnaire.

Here the ability to play back from memory figure sequences without a clear meaning after being briefly introduced to a sequence is evaluated, testing the child’s short-term memory.

This subtest of the Illinois Psycholinguistic Aptitude Test is ideal for evaluating the child’s visomotor coordination, as well as allowing us to observe whether he or she is able to discern between the picture and the background.

Knowing how to differentiate between a figure and another one presented in two dimensions is fundamental in order to acquire the reading and writing skills satisfactorily.

It allows to see what capacity the child has to relate concepts that are visually presented. Drawings are presented that the person being assessed has to relate to a previous drawing .

This subtest allows you to work on several aspects, such as motor expression, lexical comprehension, visual-motor coordination, oral expression and symbolic play.

It is observed how capable the child is of identifying animals, objects or other types of groups of known elements from a schematic or incomplete representation of them.

Thus it is possible to see the child’s ability to discern between the figure and the background , which as we were saying before, is a key skill during the learning of reading and writing.

This subtest may seem the least related to a person’s psycholinguistic abilities, but the truth is that the ability to gesture meanings manually is perhaps the most complicated thing you can do if you are a hearing person.

It is measured by presenting drawings of everyday objects in which the child has the task of imitating how he or she would use them or expressing in the form of gestures what is as unambiguous as possible.

The test evaluates the child’s ability to obtain the meaning of spoken language, in addition to working on his/her visual-motor coordination.

To measure listening comprehension, a fragment of a text is read aloud to the child, adapted to his or her age. The child is then shown pictures that refer to what he has heard.

From this, the child is asked questions to see if he has understood what he has read , asking him to point out which images are more appropriate to the text or to the facts described in it.

It measures the child’s ability to relate concepts that are presented orally . This is of great importance in spoken language, allowing the child to relate what is being said to what has already been said, having a clear idea of the topic being discussed.

To test this ability to handle linguistic symbols with meaning orally, a series of verbal analogies are made, with increasing difficulty.

In addition to seeing the child’s oral capacity, it is also possible to see what his lexical level is and his ability to recover the vocabulary he has acquired.

It allows the immediate recall of non-significant material to be assessed orally. That is, it allows to know what vocabulary recovery capacity the child has but without talking about a specific topic or related to a list of words.

The test consists of repeating a series of two to eight digits , working on short-term memory and auditory perception.

The verbal and lexical fluency of the child is evaluated with respect to a specific semantic field . In this way, it is possible to see how much they know about a particular subject and if it is necessary to work on the vocabulary because it is deficient for their age.

This can be analysed from the number of concepts that the child can describe verbally, as well as relating them to others and using their real name rather than resorting to vague and incomplete descriptions.

This subtest allows to evaluate the syntactic and grammatical capacity of the child by presenting him/her with sentences that are incomplete and must be completed with drawings. The student must complete them in order for them to acquire a meaningful meaning.

Here it is possible to work on many aspects related to the aspects described above , such as your listening and visual comprehension, as well as seeing your command of the vocabulary related to the sentence to be completed.

It evaluates the ability to produce a word from the pronunciation of the first phonemes of the word . For example, you can ask the child ‘what am I talking about? Carame…’

The ability to synthesize the sounds separated by a word, in order to produce the complete word, is evaluated.

As with other tests, it is essential to respect a series of rules so that the evaluation carried out with the Illinois Psycholinguistic Aptitude Test is as objective and reliable as possible. Therefore, it is necessary to take into account the following aspects when applying this test :

How to improve the child’s psycholinguistic skills?

It is possible that after applying the test some deficits, both visomotor and auditory, have been found in the child. While this may be an indicator of a language, developmental or learning disorder and may require referral to a professional, it may also be only a minor problem. In any case, there are a series of strategies that can be applied to improve the child’s psycholinguistic abilities .

Another option is to ask him to explain the world around him. You can ask him to describe what butterflies look like, what he has seen in class or on the street today, what his schoolmates are like…