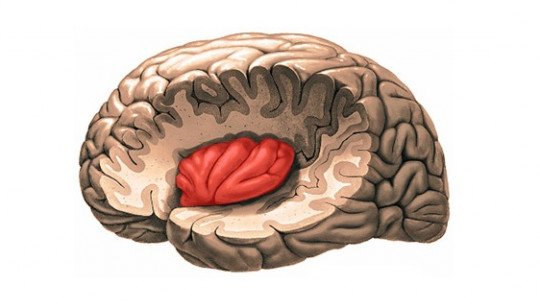 By now it is known to the vast majority of the population that the human brain is divided into four brain lobes.

With a simple image of the brain we would be able to locate a large number of parts of the brain. However, there is a very relevant structure that can remain hidden from visual observation, taking into account that it is located at a certain depth behind one of the main brain furrows. This structure is called the insula.

What is the insula?

Also considered as the fifth cerebral lobe, the insula is a structure of the cerebral cortex located at the depth of Silvio’s fissure, at the point where the temporal, parietal and frontal lobes converge, being delimited by their respective operculi.

The insula is part of the mesocortex, or paralympic system, along with the orbitofrontal and other structures. It is a connection centre between the limbic system and the neocortex, participating in many different functions either directly or indirectly.

The island is not only a uniform structure that homogeneously performs the same functions, but different parts of this structure are responsible for different tasks . Specifically, the island is divided into an anterior and posterior island, both parts separated by the central insular groove.

The posterior region of the insula is mainly more innervated with somatosensory neurons, which are the ones that create a &amp;quot;map&amp;quot; of the sensations of position related to the different parts of the body. Thus, the participation of this region will be more linked to the control of the viscera and internal organs.

The anterior part of this brain structure presents a greater link with the limbic system, being its functionality more oriented to the emotional integration of experiences and perceptions as a unitary and global sensation.

Main functions of the island

Let’s look at some of the main functions of the island region.

As we have seen, the island influences a large number of basic and higher processes (related to abstract thinking and decision making), and is an element of great importance for the proper functioning and even survival of the organism. In this sense, research carried out in the field of neuroscience shows that the island participates in the following processes .

1. Perception of taste and smell


The sense of taste has its main primary sensory area at the lower end of the insula and in the parietal cortex. It is at this point that taste information becomes conscious, appearing as a private and subjective experience but related to the elements of the environment we are tasting.

It has also been observed that the insula participates in olfactory perception, although this sense tends to have a dispersed neural network along the brain.

The insula also plays an important role in the regulation of the viscera and organs . Specifically, it has been observed that its experimental manipulation produces important variations in blood pressure and heart rate. It also participates in the sensations coming from the digestive system, participating also in the management of this system and the respiratory system.

The vestibular function, which refers to body balance and control of the body in relation to space, also presents afferences to the insular region, being a relevant nucleus in its conscious perception. Thus, thanks to the island a healthy person is able to know what position each of the main parts of his body occupies at all times.

4. Integration of emotional and perceptive information

The insula, as mentioned above, acts as an association zone between very different observations , especially with regard to the association between perception and emotion.

Thus, thanks in part to this brain region we learn from our experiences, since we link pleasant or unpleasant subjective sensations to what we do and say and, in this way, we associate behaviors with consequences through what we perceive.

5. Involvement in addictions: desires and craving

Because of its relationship and connections to the limbic system, the linkage of the insula to the brain’s reward system has been explored. Research has shown that this structure intervenes in the processes of addiction to certain drugs, contributing to the maintenance of addictive behaviour.

This relationship is due to the involvement of the island region with the integration between emotion and cognition , being especially involved in the phenomenon of craving or intense desire for consumption.

We have seen before that the insula has great connections with the limbic system. In this respect, recent research has indicated that this region of the cerebral cortex plays a key role in the capacity for emotion recognition and empathy. Thus, it has been shown that those individuals without an insula present a much lower recognition, especially with regard to the emotions of joy and surprise, as well as pain.

In fact, it has been suggested that the deficits found are very similar to some cases of autism, borderline personality disorder and behavioral problems, so that research could be done regarding the functioning of this brain area in certain disorders.